Doug Fir Lounge on East Burnside is the latest Portland venue looking to mix bicycles and business. They’ve launched a “First Mondays Biking Wonderland” event series that will run from May to October. Headlining the events is a Goldsprints competition with a championship slated for October 4th.

On each of the six first Mondays starting in May, the fun will start at 6:00pm with a “Biking Social,” then the Goldprints will run from 7:00 to 9:00 (under an awning on a patio adjacent to the lounge) and an after-party until 10:00pm will round out the evenings. 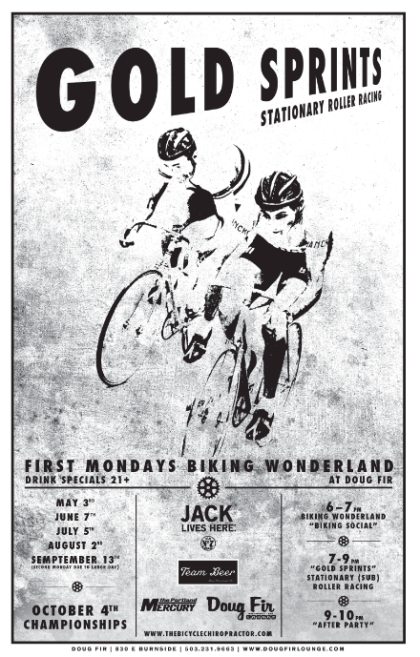 General Manager of the popular live music venue, lounge and restaurant, Bryan Deckert, said they wanted to get more involved with Portland’s community of bike lovers because, “We want to do our part in reclaiming the best bicycle city in America from Minneapolis.”

Referencing the ongoing East Burnside/Couch Couplet Project, Deckert added, “With all the progress being made in the neighborhood to make it a more bike friendly area – we felt gold sprints would be a good “vehicle” to reach out and create something fun.”

Deckert recently finished a lobbying effort with PBOT to get an on-street bike corral installed outside his business. “My favorite nights at Doug Fir are when I walk out and see all the bike racks full.” Deckert has also just installed a light over the bike parking for added security and convenience.

Jack Daniels is a primary sponsor of the events. Other sponsors include The Portland Mercury and The Bicycle Chiropractor. Portland’s Team Beer is coordinating the gold sprints competition. Kudos to Deckert, Doug Fir, and the other partners who came together to make this happen. Seems like a great addition to our vibrant bike scene!

Sounds like an interesting mix of competitive bike fun and socializing.

I’d like to race on rollers as I’m good at them. I’ve heard that many of these these “roller races” are just a golds gym spin race, your bike is bolted to the rollers. Can anyone update the article, real or fake roller races? It is like calling a freewheel single speed a fixie.

These are GoldSprints. Bikes are “bolted” to the machine. Maybe not something you’re interested in as these are “fake rollers” but it makes it much more comfortable and approachable for those not used to real rollers. Probably not fun for you at all. Most people have a great time though.

Another point Joe, is that the cool thing about these events is that anybody who happens to be at the venue can just hope up and give it a try. If real rollers were used, that wouldn’t be the case.

i just realized i mentioned “stationary rollers” in the story. i’ll edit that out.

Hmmm, sprinting and Jack Daniels could certainly be an explosive combo…

Just put together a little video promoting the event
http://www.youtube.com/watch?v=FQ9IXGPYirU

Also, my band, CrankMyChain!, will be performing at the July 5th heat.