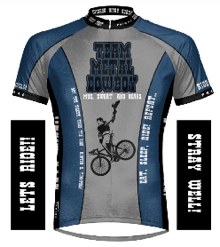 North Portland resident and nationally known author Joe Kurmaskie is set to announce “Team Metal Cowboy” at The Bicycle Show tomorrow. Kurmaskie, who is slated to give a presentation on the Main Stage at 4:00, will share the news that he’s now sponsored by Eugene-based bike manufacturing company Co-Motion Cycles, who will produce a signature line of Metal Cowboy bicycles to be rolled out nationally to dealers across the country.

According to Kurmaskie, the bikes will have custom features and Co-Motion has agreed to donate a portion of the profits from the sale of each bike to Kurmaskie’s non-profits — Camp Creative and One Million Bicycles (an effort he launched in 2008, but has put on the backburner since then). 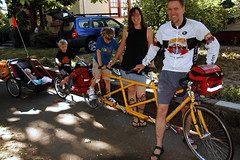 The Kurmaskie family before their
journey across Canada in summer
of 2007.
(Photo © J. Maus)

Team Metal Cowboy will also involve Arkel, a Quebec-based pannier bag company that has sponsored Kurmaskie for the last 10 years. They’ll produce a signature line of bags and a brand new family and kid’s line of bags featuring the Metal Cowboy logo. A portion of the proceeds from those bags will also be donated to the non-profit organizations.

Rounding out the Team Metal Cowboy offerings is a newly designed jersey by Primal.

Kurmaksie says Team Metal Cowboy is “a concerned and unified effort” to bring his sponsors together to help raise money for a capital campaign to buy a 150-acre ranch in White Salmon Washington where Kurmaskie runs an outdoor camp for kids. Plans for the ranch include a cyclocross track and mountain bike trails.

Kurmaskie will announce more about Team Metal Cowboy at The Bicycle Show tomorrow. His presentation, Mud, Sweat and Gears: Metal Cowboy’s Canadian Family Bicycling Adventure is on the Main Stage at 4:00pm.

I just discovered Joe Kurmaskie’s books at Powells this year. They are the most enjoyable and engaging thing I’ve read all year long! I hate to make the Bill Bryson comparison, but… I can’t read them without emitting snorts of very loud laughter in the bath. And wow, what fabulous biking tales full of larger-than-life characters from across the globe.

I am feeling the need for a new jersey! Go Joe K! That is awesome! I love the camp idea!

Is there a family discount on jerseys?

Hey Everyone – come by and visit me at the Portland bike show this weekend – I’m in the Co-motion booth! We’ll have bikes to look at and talk about, jersey’s to order, arkel bags, my books of course, and show girls – wait, that’s the Vegas show. but come by, Mike and Pete from co-motion will show off what are gonna be my new line of bikes!

Hey Gang – vist me between performances this weekend at the Co-motion booth – we’ll have samples of jerseys, bikes, books of course, Arkel bags and showgirls, wait, that’s only at the Vegas show, but profits go to the foundation for my bike causes so stop by have some laughes and we’ll get mike and Pete to show you some team metal cowboy bikes.

I wonder what it would it take to get One Million Bicycles cooking again. It’s a great idea.

Rita – we’re working hard to reboot it – we launched it at the height of the recession and we received tremedous response in terms fo numbers but the money from folks did not follow – so be it – we’ve been working on other ways to skin that cat and teaming up with larger organizations and refashioning it, I’m actually in the process of soliciting for website help on it today- to that end if you’d like to email me off list and discuss and aspect of the project. mtcowboy@teleport.com. I’ll make a public announcement when time is right – but the teammetalcowboy effort – to raise funds for camp creative AND one million bicycles relaunch.