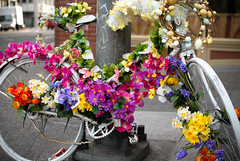 The plaque was donated to the church by Tracey’s parents, Lee and Sophie Sparling. Following Tracey’s death, her family maintained a ghost bike at the corner of W Burnside and 14th for two years. They would decorate it for various holidays and make sure the flowers were fresh. Last October, Mr. and Mrs. Sparling, Tracey’s aunt Susan Kubota and other friends and family, met with local activists who rallied for traffic safety improvements following her death. They gathered at Ringler’s Pub (just yards from where Tracey was struck) to remove her ghost bike. The occasion was a reunion of sorts, along with a remembrance of Tracey, and a way for people close to her to move on in their grieving process.

At the service on Tuesday, clergy of St. Stephen’s Episcopal Parish, the Revs. Dennis Parker and Kenneth Arnold, will bless the bicycle with chain oil. In a statement from St. Stephen’s, Father Dennis Parker says everyone is invited to the event, “to join in remembering this remarkable young woman whose promising life was cut short so tragically.”

Susan Kubota told me this morning that, “Our family could not have hoped for a better place to let Tracey’s ghost bike rest.”

I always wondered what happened to that bike.

Speaking of this crash…

…is PBOT ever going to wrap up the design deficiencies at this intersection?:

– update the signage to warn drivers of the right hook scenario (the overhead signs seem to still be the precrash ones – the thru right movement sign tells drivers to turn right but there is no mention of the bike lane they are crossing)
– simplify simplify simplify the intersection movements (reduce the number of thru lanes leading to 405, make each lane a single movement, reduce the number of total lanes, etc.)
– pull back or remove the parking in front of the Crystal Ballroom…it is especially a problem when band and tour buses park there and extend out into the bike lane (it is so common – you can even see this occurring in the aerial from Google Maps!!!).

[Or have I missed this work being done recently during my travels?]

The chain oil as blessing is a nice touch.

In addition to a memorial, aren’t ghost bikes traditionally kept as public fixtures in order to promote awareness of cyclists as vulnerable road users?

The Ghost Bike should stay on the street!

Isn’t that the whole point of the Ghost Bike?

A very obvious reminder for everyone to be more careful?

Someone should explain this, and get the bike back on the corner where the accident happened.

Todd – I just passed through the intersection yesterday, and the tour bus parking issue remains.

I do not presume to be an aficionado on the history or purpose of ghostbikes. But I am in the unfortunate position of having one erected for a dearly loved and cherished family member.
Ghost bikes are memorials for a bicyclist that has been killed or hit on the street. They are also meant to remind all who travel past to share the road.
They are unauthorized memorials that are generally placed on public property. They are not sanctioned permanent monuments.
Many of the ghostbikes erected thru out the US are removed within a month of placement by official city workers. Reasons for removal range from littering, local business complaints to safety issues.
From a personal perspective, the unexpected placement of Tracey’s ghostbike provided surprising comfort during a time of terrible sadness and confusion. The bike was located at a highly travelled intersection with equally busy traffic on the sidewalk. It was extremely painful to frequently find it disrespectfully vandalized. My sister and I tried to maintain the memorial in a state that Tracey deserved and unknowingly to us, the McMenamin’s staff also helped keep the site tidy.
In March 2009, fully within their rights, the McMenamin’s staff removed the bicycle. The ghostbike’s disappearance created unanticipated personal devastation. After conversing with the Ringler’s McMenamin’s property manager they returned the bike and agreed to allow us, the family to decide when to provide closure for Tracey’s passing.
St Stephen’s Episcopal Parish has been kind enough to provide a permanent resting place for Tracey’s ghost bike where it is not just a memorial to Tracey but to all dearly loved and missed cyclists who have died on the streets of Portland.
There at the Madonna Del Ghisallo Bicycle shrine we have been given the opportunity to pass the ghostbike on to provide comfort for others in need. The Portland Bicycle Shrine was established as a place of prayer and remembrance of those in our community who travel by bicycle and in supplication for the safety of everyone on our streets.
In place of Tracey’s ghost bike, the city of Portland set up a green bike box at the intersection of Burnside and 14th and at other dangerous intersections to remind drivers to be alert for cyclists and to provide increased visibility for vulnerable users of the road.

Just went by to run through the ceremony tonight, the new signs are great and the ghost bike looks at home in its new setting. I would encourage you to join St Stephens, The Bike Temple and your community for this historic event, regardless of how you feel about this religion or particular landmark.