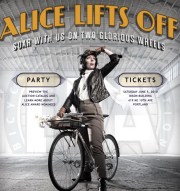 The Bicycle Transportation Alliance (BTA) has unveiled a new website and theme for their 2010 Alice Awards and Auction event. They have also confirmed this year’s list of nominees.

“Alice lifts off: Soar with us on two wheels” is the tagline on the new website, which features a vintage aviator aesthetic (due to the hangar-like feel of the Bison Building where it’s being held).

The 15th annual event is the most important fundraiser of the year for the BTA (in 2008, they raised $150,000). In addition to ticket sales (which go for $100 a piece), it also includes both a silent auction and a live auction. Attendees dress in their off-bike finest and are treated to dinner and a night full of toasts to Oregon’s bike advocacy movers and shakers.

There are 30 award nominees this year, including organizations and individuals from throughout the state. Some notable names on the list include our West Side correspondent and citizen activist superhero Jim “K’Tesh” Parsons, the blogging crew from Urbanmamas.com, Oregon Manifest director Jocelyn Sycip, the Portland Trail Blazers, and Rapha’s North American manager Slate Olson.

Another big name at this year’s Alice Awards will be newly hired executive director Rob Sadowsky. He isn’t slated to take the helm officially until about a month after the event, but he’ll be in attendance to meet and greet donors.

The event is slated for June 5th at the Bison Building (419 NE 10th Ave) in Northeast Portland.

Last year, the event had 700 attendees at $80 a head. That means $56,000 was collected in ticket sales alone. This year, there will be half as many people at $100 a head, meaning at least a 20% decrease in ticket proceeds ($15-20k). As a BTA member, I would like to know if the difference in venue rental and catering costs will offset the reduced revenue from ticket sales. If not, then why did the BTA’s board decide to move the event to a different location and date, a location which cannot support growth in the size of the event?

red dress is having their event there in a couple of weeks, and they are used to having two thousand in attendance. can the bison simply not support this? they claim to have up to 13k square feet available. also, how do we know attendance will be down, and by how many? just asking.

are (#2) – 13,000 square feet if fully rented would support an event size of 850 to 1300 people. I don’t know how much of the space the BTA has rented, but BTA staff have identified that the seating capacity for the event is fewer than 400 people. If this is incorrect, then I hope that someone on the BTA staff will correct that misperception.