New still images taken from surveillance video nearly one month ago show 22-year old Tyler Brady — who has been missing since February 27th — riding his bike in Northeast Portland. As reported two weeks ago, Brady was last seen riding his bicycle in Southeast Portland.

Today, the Portland Police detectives have released five images taken from surveillance video. View them below (along with descriptions provided by the PPB): 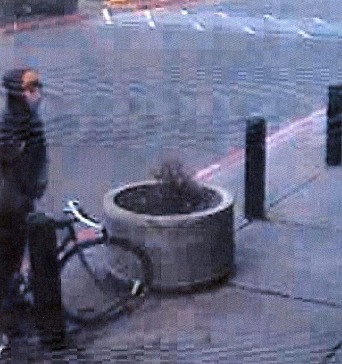 Depicts Brady and his missing bicycle outside the NE MLK/Ainsworth Safeway store on February 17th, 2010, at approximately 10:00AM. Note, Brady’s yellow knit cap, which he is believed to have been wearing when last seen, and the white, bull-horn handlebars which distinguish his black, fixed-gear Schwinn road bike. 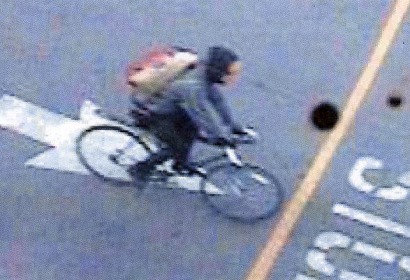 Depicts Brady riding his bicycle, also unaccounted for, away from the NE MLK/Ainsworth Safeway store, February 17th, 2010, just after 10:00AM. Detectives believe Brady stopped at the store enroute to work, and then worked a full day at his job in the Delta Park area. 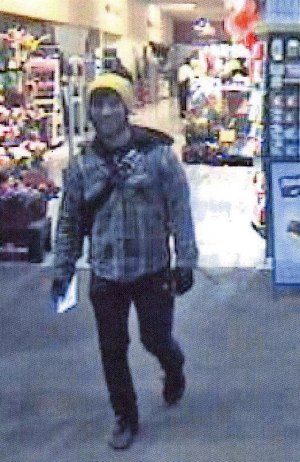 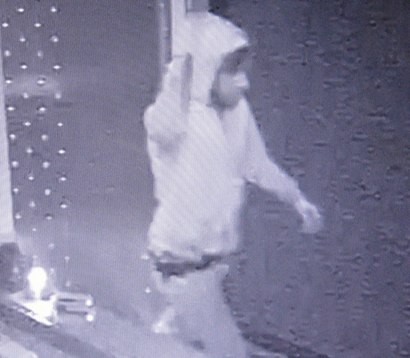 Depicts Brady entering the Couture Ultra Lounge, located at NW 4th/Couch, February 17th, 2010, at approx 11:00PM. Detectives have confirmed Brady stopped by the lounge with a friend, an employee of Couture, where they visited briefly with another employee. 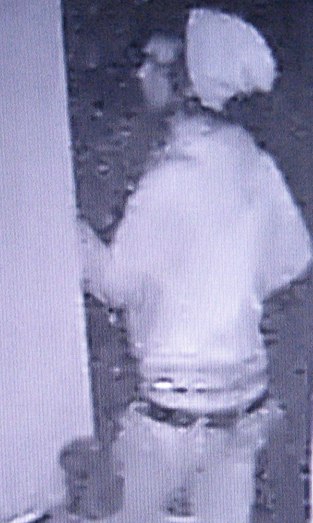 Depicts Brady leaving the Couture Ultra Lounge, a short time later. This is the last known video of Brady before he disappeared without explanation.

A description of Brady:

Brady is described as a white male, 22 years old, 5’10”, weighing 150 pounds. He has brown hair and blue eyes, a scruffy beard and mustache, and has tattoos on the back of his neck and on one of his arms, and a pierced nose. Detectives have determined Brady was last wearing a dark-colored hoodie with a large white design on the back, dark-colored pants and a yellow knit cap.

Anyone who knows of Brady’s whereabouts is asked to immediately call 9-1-1. Anyone with additional information about Brady is asked to contact Detective Mike Weinstein, 503-823-0446.

My thoughts are with his family and friends. I hope he is found safe and well, sooner rather than later.

Sorry, what is the best guess about where he was going, after leaving 4th and couch ?
And who saw him “riding his bicycle in Southeast Portland” ? Where ?

And why do they say “Brady was last wearing a dark-colored hoodie with a large white design on the back”, when he looks to be wearing a light-colored non-hoody with no design, in the final still image ?

These video grabs are all from the 17th, and he’s been missing since the 27th? What happened in the intervening 10 days?

He was not reported missing until the 27th because his friends assumed he was with family out of town, later finding that he had not made contact since the 18th iirc

According to the previous (over two weeks ago) reports, he was last seen on surveillance cameras at the bar “Tube”.. but he wasn’t let in, and he was with a friend. Where is that at and why don’t we know anything about what the friend has said?

I think I saw his bike for sale on craigslist. Matte-black “fixed-gear” – just the frame and wheels $50. It sold quick. This was before he was reported missing. Not exactly sure it was his bike though, but I saved the ad.

By the way, this is just inept blogging http://bikeportland.org/2007/08/01/stolen-trek-obviously-stolen/
Even given that, somehow, craigslist BS and innuendo become blogworthy here, you risk looking like a total wanker with entries like that.

Did he have a phone, and what do the cell records indicate ?

Joe, did it have the white bar tape ?

Joe, I believe that the post from 2.5 yrs ago is a “stolen bike report” and not necessarily a blog entry. So I wouldn’t put too much into it.

Did he roll with a Ulock or a chain lock ?

Those are drop bars, not bull horn bars on that bike.

Wondering if he accidently rode into the river off of the floating portion of the Esplanade. Might make sense for the police to search for his bike around there.