Duff is the man behind Veloforma, a company he started in January 2007 that designs and sells carbon framesets. Hudson met Duff as a racer on the Portland State Cycling team and the two are now partners in this new venture. 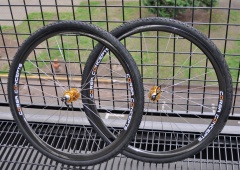 As a wheelset with Portland-made Chris King hubs.

Matt Cardinal of Signal Cycles says, “They’re great do-it-all wheels. On top of that, everyone I have been talking to is excited about a Pacific NW made wheelset.”

Hudson told me this morning that they’re selling wheels customer direct for now, but they hope to set up a dealer network and distribution partnerships down the road.

Portland Velo is proud to be working with these guys. Congrats to Mark and Greg on their launch!

Best of luck with this new venture!

However, could this blog report on “made in portland” products that are AFFORDABLE? MSRP of $1700?

Why does made in portland = outrageously Expensive?

Contrary to what you might think jbiker, The cost of carbon fiber is not inflated in Portland. Its expensive everywhere.

High end wheelsets are in an entirely new category of expensive. While the Cat 4 racer and and non-racing rider cannot fathom spending such $, it’s just what this elite product costs. There will always be the equivalent of the $100+K sportscar in cycling.

If you’re near the top of the sport, then you’ll likely want to get the fastest kit available.

My road machine sports what I consider light fast mavic rims that cost under $100/wheel. Until my speed puts me in the Cat 1/2 or Pro racing world, I have no business with carbon wheels. Given my life & goals, I’ll never “need” or even want them. But then again, those rims would be rad on my fixie.

These products offered are nice, but I suspect, like the frames they sell, certainly not made in Portland, let alone America.

This is not to say anything bad about them, as there is not.

There are however carbon rims made in good ole’ Vancouver, Washington, though I do not think they are in production yet? (and of course the sweet Ellsworth Single Speed is made over here)