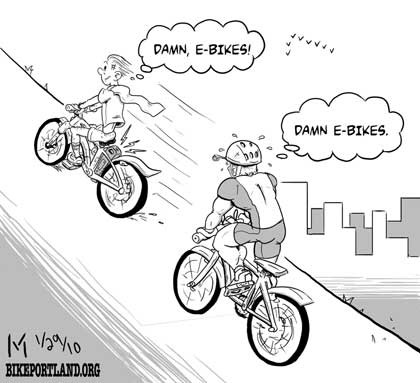 – Illustration by Mark Markovich
– Concept and script by Jonathan Maus
– Related story: In Portland (and America) ready for e-bikes?
– See past cartoons here.

[Publisher’s note: We’re all excited about this new feature. Mark Young is very talented and we’d love to keep him around. If you can, please consider sending a bit of support our way. Thank you!]

Clearly, the reason why the e-bike rider is climbing faster is due to his more svelte physique. Think Michael Rasmussen vs. Jens Voigt. 😉

the cartoon does not directly address the question of putting e-bikes in bike lanes, but in that context, the objection would come not only from sport cyclists.

Love it! Well done to you both.

e-bike = no need for a helmet?

Oooooo, a joke created with syntax as humor. Ha! Your cartoonist is a hood one. I have enjoyed the last several weeks, looking forward to the Friday cartoon. A biketoon.

Wow, was the artist climbing Mississippi in the pouring rain on Tues when dude went scooting up the hill past us?

That’s Dagwood on the e-bike.

Before the whiners chime in: its just a cartoon!

He’s the illegitimate child of Dagwood Bumstead and Archie Andrews. With a pinch of Jimmy Olson.

Wll all ebikers be required to wear a cape… like Dagwood here?

Yeah… the cape comes with the bike.

…and you don’t need to wear one of those clip on rear view mirrors because all you do all day is pass folks.

Nice to see some humor in the this whole thing. Lance-a-lots who criticize electric bikes riders are like runners criticizing of those who walk for exercise.

Runners criticize walkers because they ruined the sport. Races used to cost $20 and that included a t-shirt and a certified course. Then the suburban power walkers started showing up.

Now races cost $40 or more, the t-shirt will set you back an additional $20, and the course is “in the ballpark” of the advertised distance. To top it off, “races” are no longer athletic events. They are costly family fitness festivals with with aerobic dance warm-up performances, a toddler trot, baby stroller dash, and a hokey vendor expo. Why? Because waddling suburban hausfraus want an uplifting motivational seminar with chotchkies. The athletes that actually come to compete are ignored or derided by the walkers for being “too skinny and too intense!”.

Mark my words, e-bike owners are going to start invading Bridge Pedal, then STP, then Cycle Oregon, then…

No, it’s like runners criticizing people who ride their Segway for exercise.

lazy spinner, that was funny… . It seems you’re saying that adding a lot of extra attractions to what at one time primarily were runners ‘go for it’ fests, has driven up the cost of running events and the chotchkies associated with them.

Could be…I don’t know…but if some means can be devised to make it possible, isn’t it alright for people, besides exclusive groups…to get in on the fun? For many people, I think this is what electric assist technology is turning out to be.

For them, it’s the door to freedom. The stories are out there, of people with various disabilities for whom biking wasn’t really an option because of a few obstacles. They pedal as much as they can to get in shape over the terrain they can manage, but the assist gets them over the part of the hill they just can’t quite ascend on bare muscle alone…and they’re on their way.

I will not like seeing e-assist and e-bikes be abused by people to avoid taking good care of their physical and mental health, but it seems as though it’s possible for this technology to made to help improve people’s lives without too much of an imposition on everyone else that rides on their own power.

wsbob #17
By your argument, vehicles should be allowed in wilderness areas. A 4 wheel drive is their door to freedom.

Not just the amenities, because the events were getting larger and attracting a class of less fit participants, the costs of liability insurance, permits, EMT services, traffic control and street closures, police, etc. went up as a result.

I’m all for getting people out of cars and if the e-bikes help to achieve that goal then it is a net positive. However, I have a bad feeling that e-bike riders will start seeing themselves as cyclists and start to infiltrate cycling events. Bridge Pedal is crowded enough already. Now throw in a bunch of e-bike riders on heavy upright frames that don’t handle well. They will use their e-assist as an excuse to tackle the longer hilly ten bridge ride and since they can now do 18-20 mph without much effort and will start to mix in with experienced roadies. Marginal handling, a false sense of confidence, and no knowledge of pack riding ettiquette will lead to accidents and injuries.

Best case: the event rolls on but gets more expensive because the liability risk increases. Worst case: Sponsors drop out due to increased costs and/or bad PR generated by the wrecks. As an added bonus, “real” cyclists and “e-bikers” get locked in a hate fest that splits the bike community and reduces our effectiveness in the political and advocacy arenas.

The exclusive world of racing will not be affected since OBRA and USAC will never let e-bikes participate. I worry that big cycling events, centuries, and charity rides will suffer.

Give it a break. It never fails. Any representation of anyone sans helmet and the hall monitors have to pipe up.

It’s tired, boring, and you’re not convincing anyone of anything other than that’s about all you have to say.

(I wear a helmet)

“wsbob #17
By your argument, vehicles should be allowed in wilderness areas. A 4 wheel drive is their door to freedom.” Bob_M

Bob_M, if you say so…but I think your suggestion is stretching my argument a long,long way. I suppose the guys in the cartoon might be in the wilderness, even though the cityscape is visible in the background. The city is where e-bikes and e-assist bikes are going to have the greatest appeal and value to people.

It seems a little early to be worrying that 4 wheel drives may be allowed in the wilderness because in the city, e-bikes/e-assist bikes are being allowed on bike paths.

From what I’ve been able to gather from this site and a couple forums, is that in this country, e-bikes/e-assist is at a very early stage. There aren’t great numbers of them on the street and bike paths, and at present, the bike paths do not seem to have been taken over by marauding e-bike riders.

Before that ever happens, I tend to think limitations will be put on their usage so as to keep the presence of this type of bike from discouraging people from riding muscle only powered bikes. People will have to make efforts to be sure this is what happens. E-assist is a great tool, but not if it displaces basic muscle powered bike use.

First it was the roadies, then it was the fixie hipsters, now it seems to be the e-bike folks. It is really hard to keep up with who it is cool to hate these days!

lazy spinner: we’re already at bridgepedal. if you haven’t noticed us we must be doing it “right,” eh?

I have no hate, but the “door to freedom” argument is exactly what ORV users already say to argue for access to wilderness.

The bone of contention is that E-bikes by their very nature are motor vehicles. To argue otherwise is nonsense. They have and use a motor. Wsbob is well reasoned to note that the technology is in its early stages, and their place in the transportation soup has yet to be defined.

If they are governed to a maximum of say 12 MPH I have no beef with them using bike lanes, and I will hold my tongue when some skinny leg kid blows past me while I’m grinding up Montgomery. Hell, it might be a way to get my wife to ride with me. But There will need to be rules for these things. Companies already makes electric cycles much faster than 12 MPH and motor vehicle users can not be counted on to use courtesy and good sense.

“limitations will be put on their usage” only if people start talking early.

And they should do exactly that. The help of many people is needed to figure out how to best manage e-bike use on bike lanes so the benefit of e-bikes can be realized without adversely effecting muscle powered bike use on them, or adversely affect the overall transportation picture.

How many people on e-bikes might start showing up on bike lanes in the metro area? Thinking of the many variables involved, that’s a hard question to answer.

Bob_M’s right…electric tech can allow bikes to go very much faster than 12mph. And as always, some people like hotroddin’ whatever it is that’s getting them around.

I blew past an e-bike recumbent on Thursday up on council crest, he tried to grab my wheel, but these legs were to quick for him. Long live the legs! The best bike technology to date.

‘strue, jocko: i was pretty impressed when i saw someone climbing the hill under his own power faster than i was doing with assistance. maybe someday…! in the meantime, i’m just glad to be out and about on the bike. 🙂

Legally speaking, how are e-bikes different than electric scooters? Is anything codified? I bring this up because there will be some confusion when electric scooter users start using bike lanes because the e-bikes can. The average person sees no difference and the scooter riders may feel justified in doing so. What about MUPs like Springwater?

IMHO, another argument against bike lanes and in favor of sharrows. We’re all traffic.

From the NYT article that Elly linked:

By contrast, in China, electric bicycles have evolved into bigger machines that resemble Vespa scooters. They have small, wide-set pedals that most cyclists do not use as they travel entirely on battery power. The bikes move at up to 30 miles an hour, with a range of 50 miles on a fully charged battery.

Of course, Americans would NEVER go for something bigger, faster, and lazier, eh?