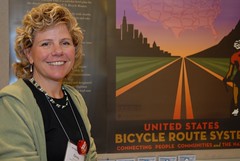 We’re excited to announce the latest event in our “An Evening With…” series of live interviews. On Wednesday, February 3rd, I’ll sit down for an in-depth conversation with Ginny Sullivan from the Adventure Cycling Association.

Ms. Sullivan is the coordinator of Adventure Cycling’s ambitious effort to create the United Bicycle Route System, a national network of bicycle routes they describe as “the largest official cycling network in the world.”

That effort has gained considerable steam since the framework of the plan was approved by the American Association of State Highway and Transportation Officials (AASHTO) back in October of 2008. Earlier this month, Adventure Cycling announced that they’ve received grants from Bikes Belong and New Belgium Brewing to continue planning the network. 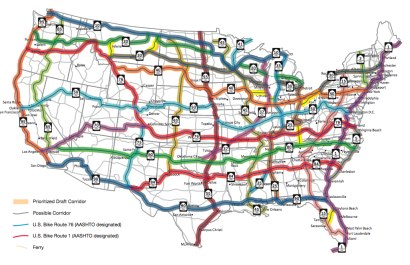 Over 20 states are already actively involved in route planning and in a recent survey of state departments of transportation, 32 of the 35 that responded were interested in some level of implementation. The USBRS is modeled after similar efforts around the world like the National Cycle Network in the United Kingdon and La Route Verte (the “Green Way”) in Canada.

Sullivan’s work on this project has given her plenty of war stories and important insights. She’s come face-to-face with the vast bureaucracy of federal transportation planning and she’s become all too familiar with barriers in the system that make it difficult for non-motorized transportation to flourish in America.

I hope you can join us. This will be a great conversation — not just about the USBRS system but about the realities and the future of bike travel.

Browse our previous coverage of the USBRS and learn more about the project at AdventureCycling.org.

We hope you can join us! Bring your questions for a Q & A that will follow.

GREAT GREAT organization. I visited the office in Missoula, MT towards the end of my cross country trip (using their maps). I showed up just as they were closing and they still let me in, gave me a drink, and led us on a tour of their facilities. I can’t say enough about them.

Any chance we could get these recorded and made available online?

I was just thinking about this group. wild! great work 🙂

I second PDXcyclist’s motion for a recording to be made available online. As a Life Member of Bikecentennial (ok, I’ll call ’em Adventure Cycling for now), but living in NYC, I can’t always get to hear them speak at events (Of course, Jim S has come to NYC twice now, so I shouldn’t really complain and I’m not).
If not an actual recording, how about a transcript of sorts?
Thanks very much.

I really like the graphic for this project, but I would say that it needs more bike rider. We’re in this together – it’s no longer about the individual driving (or riding) alone!!!