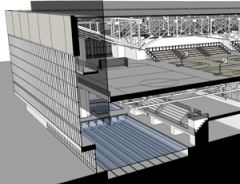 Cross section of the MARC (there’s
a velodrome in there somewhere.

The City of Portland recently ended its call for concepts to redevelop the Memorial Coliseum. There were 80 different concepts received — ranging from a world class bowling arena to “a museum that celebrates the bygone era of the automobile.”

Among the concepts, there are two that include a velodrome. One of them was proposed by Steve Brown; the racer, business consultant, and velodrome activist we’ve covered since back in 2006 when he worked a velodrome bill through the State Legislature. That effort ultimately stalled out, but Brown’s enthusiasm for bringing bicycle track racing to Portland is still going strong.

Brown’s proposal got some attention at the outset of this process, but it’s unlikely his small non-profit can keep up with the major money players that have since entered the race.

Fortunately, the proposal from Shiels Obletz Johnson, a major project development company, also includes a velodrome. Their concept is known as the MARC – the Memorial Athletic & Recreation Center. Here’s a snip from their description:

“The MARC will have a uniquely Portland spin by including facilities supporting our emerging bicycle culture, including an international-quality, demountable 152 meter velodrome…”

A velodrome would be just one of many sports at the MARC, making it “North America’s largest and most comprehensive center for sports events, athletics and training.”

And it’s good news for track fans because the MARC has some serious momentum. The Daily Journal of Commerce said it’s one of two top concepts (along with the Blazers’ “Jumptown”) and Ethan Seltzer, director of the Toulan School of Urban Studies and Planning at Portland State University, gave the MARC a strong endorsement via a guest editorial in The Oregonian yesterday.

Of course, the MARC also seems too good to be true and I have some skepticism that they can actually fit all those various sports into one complex. Which begs the question… are they just stuffing as much as they can into their proposal to line up support from various interest groups? We’ll have to wait and see how it all plays out.

You can learn more about all the concepts at a public presentation at the Coliseum on January 26th.

Am I missing something? Looking at the design images on their website it doesn’t show a velodrome.

I couldn’t find it in their drawings eithers, but that might be because it’s “demountable”… but it’s mentioned prominently in all their literature.

browns proposal is better designed, albeit singular in use, than the marc design. retention of the curved bowl inside the glass box is integral to preserving the architectural integrity of the memorial coliseum.

The only way this works, in my opinion, is that MC becomes a multi-use arena. Winterhawks, and I hate to say it but velodrome as well, is not going to pull enough water alone, to make this profitable. If it’s possible to do both (hockey and velodrome) and even have another event (is it possible to have roller-derby on the same track as v-drome) then you may have a chance. But, all that dis assembly and reassembly of for each invent will get expensive.

We don’t claim to have all the answers as this is still a “concept” largely put together as a volunteer effort just like Steve Brown’s. We are looking for serious community input on and support for the MARC proposal as an alternative to the Blazers’ proposal for the Rose Quarter. You can join the conversation at http://www.marcpdx.org and on Facebook at http://www.facebook.com/pages/Make-Your-MARC-PDX/241937585874 Thanks from marcpdx.org.

The proposal from the Blazers, from what I read over the weekend, sounds like a glorified shopping mall. That might pull in suburbanites for a while, but it would still be disappointing in my opinion.

@ #6 Nick V – You are correct. It wouldn’t be the first time the Blazers tried this, either*. The Rose Quarter in and of itself was supposed to be a centrally-focused commerce site to begin with, which as we all know didn’t work, either.

*Disclaimer – I’m a huge Trail Blazers fan, so please don’t take my comment to mean that I’m not a huge fan/supporter of the franchise. It’s just that they’ve tried before and after I read about what they want to do in the Portland Business Journal, it’s the same thing all over again and will indubitably fail (i.e. it’s far too car-centric).

We worked with Steve Brown to incorporate the concept of a 152 Meter “demountable” velodrome that could be installed in the arena for a competition or community use. We are also thinking that if its demountable, we could also install it outside in the plaza area east of the M.C. where it could be used for racing and by the community as part of a bike event or festival. We have a drawing of the 152 meter velodrome concept and will try and get it posted to the marcpdx.org website ASAP.

I also don’t like the “museum” for Nike that the Blazers propose. If you want to see a shrine for Nike, go visit the U of O. Bam!

#6
Jump Town does look like a shopping mall but also one you can live in as well according to their web site. Looks like a playground for overpriced condos. I like pandering crumbs of “enhanced amenities” for the “10,000” cyclist who travel by each day. Is that a legitimate Number?
Amenities such as what..a bike staple?

The Blazers are going to get whatever they want. The city wants to do whatever it can to keep Paul Allen happy, lest he decide at some point in the distant future to look for greener pastures.

I have to admit that #11 is probably spot on, especially if, by “the city”, he’s referring to Sam Adams and Randy Leonard who seem to think sports teams are one of Portland’s top priorities. And the Blazers have the money…..

The City of Portland would buy the Trail Blazers from Paul Allen in a heartbeat if he decided to take his ball and go somewhere else. They have proven willing to do so before.

Long I have lived in Portland(four plus decades). Before that I traveled here by train and car. It was at least twenty years before I “discovered” Alpenrose had a velodrome. I don’t want to debate the pros and cons of one, just that they arn’t promoted effeciently.
Not many here can remember the friday telecasts on channel 12 of rollerderby, or boxing. Im sure those programs brought many fans to the events and promoted the sports. My understanding is that Portland now has rollerderby again. Where is the advertising, promotion, etc.
I watch Blazer games, baseball, can I afford to go to all these events…sadly no although I am interested and would be in a centrally located v-dome.
Would channel 12 or others televise?. Would radio promote? Could we support six to nine months of races. Would we?

David,
Part of the long term plan is to televise races. My goal is to put track racing front and center in Portland. The vision is to have a place where you can ride, and then you can watch world class or local racers go at it. An event to see and be seen. Remember when the Trailblazers used to practice at the MJCC, anyone could walk in and watch. Democracy in Sport.

#1: We’ve now posted a new conceptual plan close-up of the MARC arena showing the layout of the 152M velodrome. See the bottom image at http://marcpdx.org/design/. Sorry for the delay in getting this up, I needed to wait for our “in house” (literally) web designer to get home from school!

One other thought following up on #8, if this is truly a demountable installation that could be used in the arena and outside during the summer– maybe it would be possible to buy additional straightaway sections that could be plugged in (like those slotcar or Hotwheels tracks we used to have) in the outdoor version so that it could be longer track when placed in the plaza. Just a thought. Feedback appreciated.

I’ll say it again (and again if I have to), most olympic sized velodromes are 250m length minimum. Why waste the time and investment if you can’t host national and international events.

#17: We understand your desire to see a larger velodrome. We are really intrigued by an amazing facility we saw in Melbourne here: http://bit.ly/7rNGMz This arena is used as a world class venue for bike racing on a 250M velodrome about 6-8 days a year. The rest of the time it serves as a basketball, concert and events facility. The basketball seating lifts up to the ceiling to reveal the velodrome. Amazing, and only in OZ! If we can somehow get some traction on the MARC idea and get into a detailed planning process, we think it would be worth exploring creative ways to get a larger velodrome to fit in the arena. This would also open the door to figuring out how to get a 200M track & field facility to fit as well. None of this can even be talked about if the community doesn’t line up behind the MARC idea. A lot of input is being posted at http://www.marcpdx.org and on Facebook at http://bit.ly/8DmV22 (MARC – PDX). Please continue to weigh in on the idea.

with an indoor velodrome, Portland could have a training center, independent from USA Cycling and the USOC for developing young cyclists from recreational level to the best racing athletes in the country. We could give elite cyclists an option other than the LA Home Depot center which is virtually unaccessible unless you have an “in” with the management there.