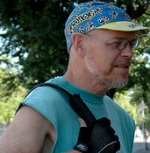 Before moving to Portland and ditching his car, Russ Willis was a founding board member of the St. Louis Regional Bicycle Federation. Russ is the author of the blog, Taking the Lane and this is his first editorial for BikePortland. This is the third article in a three-part series on The Bicycle Insurance Gap. See all three articles here.

Not very long ago, when I used to drive a car, I carried liability insurance against the possibility that I might injure or kill someone.

“As many as one in four motor vehicle operators are not carrying liability insurance at all. Zero.”

State law required me to do this as a condition of allowing me to operate the car on public roads, but hey, it was also a socially responsible thing to do. You can mess someone up pretty bad by knocking them over with a car, and I don’t have a whole lot of money.

One thing you learn when you are pricing this stuff out is that the minimum required coverage amounts are absurdly low. ORS 806.070 requires you to carry liability coverage of only $25,000 for injuring or killing someone with a motor vehicle, or $50,000 if you have been convicted within the past three years of driving under the influence. 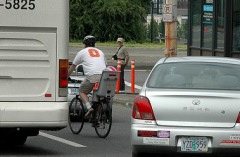 I carried something like $100,000, ’cause I am such a nice guy, and made up the difference in the premium by not carrying comprehensive. If the car was totaled, so be it. It blue booked for only about fifteen hundred anyway.

But I understood that other people might not carry more than the minimum. Someone could put me in a wheelchair, and then only be good for $25,000.

And worse, I learned that at least one out of every seven motor vehicle operators (links to PDF), and maybe as many as one in four (links to PDF), are not carrying liability insurance at all. Zero. Many of these are driving on suspended or revoked licenses. You are sharing the roads with these characters every single day.

Okay, ORS 742.502 requires an insurance company offering liability coverage to also provide uninsured/underinsured (UIM) motorist coverage as part of the package, so at least I had something to fall back on. And just to be completely clear about this: if you own a car and you have a liability policy and it has the required UIM endorsement, you are covered even if you get hit while you are on your bike or on foot.

But you gotta have the liability policy, which means you gotta have a car. Nobody is offering UIM coverage as a freestanding product to people that don’t drive. So when I got rid of the car about a year ago, I had to figure out what, if anything, I was going to do to insure against the risk that someone driving a car might hit and/or injure me.

What I ended up with was a medical policy with a very high deductible — what they call “catastrophic” coverage — but with this nifty feature that covers the first $10k, deductible waived, no copay, for treatment within the first 90 days after an “accidental injury.” Better than nothing, but not nearly as good as the coverage I was giving up.

Plan B might have been to hold onto the car or buy a clunker and just let it sit in the driveway so I could keep the liability policy and its UIM feature. But not everyone can do this, and it wasn’t the right option for me.

And in any event — and this is the crux of my argument here — it is unfair to impose on me the cost of insuring against a risk someone else is creating.

“Accidents will happen, as they say, but if I do not operate a car, I am entirely on the receiving end when they do.”

“Oh, but,” I hear you saying, “a motorist who pays for UIM motorist coverage is also paying for a risk created by someone else.” I would argue that is not really true, because every motorist participates in creating what you might call a global risk. Accidents will happen, as they say, but if I do not operate a car, I am entirely on the receiving end when they do.

It occurred to me that there ought to be a fund against which a non-motorist could claim if she is injured by an uninsured or underinsured motorist, or in a hit and run. And I figured this fund might be financed from court costs and fines in traffic cases, and possibly from premiums on liability policies sold to higher risk drivers — in particular, those SR22 policies they sell to people who have been tagged for driving without insurance or under the influence. Sort of a user fee.

I started looking into this, and stumbled across a New York statute that has been in place for fifty years that creates just such a fund. The money in the New York fund comes entirely from insurance companies, as a price for the privilege of selling liability coverage in the state, period. Pay to play, in other words. It makes perfect sense to me.

And it turns out New Jersey has a similar law, actually dating back even a few years before the New York statute. The recovery limits are rather low — the same as the minimum required liability coverage — but they are more than zero. Maryland and Michigan, and possibly some other states, have similar claims funds, though the sources of funding differ.

I don’t know how strong the insurance lobby is down in Salem, or if they would even be opposed to the idea. It might actually create a market for insurance companies to sell UIM coverage to non-motorists, to cover situations in which the recovery limits from the fund are too low.

We should make this happen — but not in a vacuum. Complete legislative overhaul is needed. It’s time to convey an unambiguous message that we are through fooling around.

Read more of our special coverage of The Bicycle Insurance Gap.

sounds like something transcon could take up, eh Russ? thanks for the well-thought-out & well-researched piece!

If I’m not mistaken, collecting from Michigan’s uninsured fund is not trivial. You need to either suffer from “death; serious impairment of a bodily function; or a permanent serious disfigurement.”

thanks, chris. incidentally, when i say “complete legislative overhaul,” some of what i have in mind is this:

one, the liability coverage minimum has to be increased, a lot. it has been a very long time since $25k could have been considered even marginally adequate.

also, we need to increase the penalties for noncompliance. SR22 should be forever, not just three years. a thirty-day suspension for multiple moving violations is a joke. and it should not require three convictions for driving under the influence or driving while suspended or negligent homicide to get a license revoked — and for life, not just for five years.

also, thanks jonathan for providing me the platform

Slightly adjacent topic: I seem to recall that several years ago, the Oregon state legislature passed a bill allowing insurance companies to sell ‘occasional driver’ insurance in Oregon. As a daily bike commuter who clocks less than 1000mi a year on my car, I would really appreciate the option of purchasing insurance that actually reflected my associated risk and liability. Sadly, last I checked, none of the insurance companies were offering a low-mileage form of coverage in Oregon, despite all that work by our legislators. Does anyone have more info on this?

In my work as an attorney representing cyclist I see these types of claims frequently.

I think the author means UM not UIM coverage. UM stands for Uninsured Motorist, i.e. a person who hits you who has no auto insurance, while UIM stands for Under Insured Motorist i.e. a person with a $25K policy who seriously injuries a cyclist (or anyone). Both a UM and a UIM claim are claims against your own auto insurance. UIM is for the amount of your coverage ABOVE the other driver’s policy limit. UM begins at the first dollar.

So bad driver has $25K insurance policy, you are hurt very badly. If you have a $50K policy (or higher) you can pursue a UIM claim on your own policy for the difference between the 2 policies.

A UM claim however in when the driver who hit you has no insurance, or a hit and run.

That difference stated, most insurance policies in Oregon have the same AMOUNT of UIM/UM coverage so they are often written as UM/UIM on the declaration page.

I think buying car insurance when you don’t have a car is a classic example of fiscal enslavement.

How many people would buy in to participate in a non-motorists’ mutual aid society?
Just curious.
(I would.)

Beth, the thing about insurance is that you never know when you’ll need it. You call it “fiscal enslavement,” I call it peace of mind.

it is enslavement if you are required to buy insurance to cover a risk that someone else has externalized and which the culture refuses to require them to cover.

It can be enslavement in the fact that you are forced to buy a car if you want auto-type insurance for your bicycle.

I think that what is needed is our own ‘pool’ or underwriting that is tailored for us and not having to force us to buy a car just to have the type of insurance that we need.

As I suggested elsewhere, I think this would be a business (and investment) opportunity for us as a community.

I think that Albina Bank was formed because of a similar vacuum as this one.

Surly, there are business types within this community who would be more knowledgeable in what it would take to form our own underwriting firm and insurance tailored for bicyclist’s needs.

Insurance is the socially responsible option, but in four years of looking, I haven’t found an insurance company that offers cyclist insurance in the area.

Don’t any of the main cycling organisations do something like the CTC’s (UK) 3rd party insurance as part of their membership?

My proposed solution to this problem is simple, and comprised of two parts.

The first is a modern, single payer health care system like most of the developed world has. Then your medical care from an accident is paid by that system.

The second part is “insurance by the gallon.” Instead of relying on car drivers to comply with the law and purchase insurance, the retail price of gasoline will include insurance. This would also mean that heavier vehicles, speeding vehicles, and vehicles that drive more miles would all pay more for insurance, which is appropriate.

To be effective, this would need to be nationwide. Since the insurance industry has purchased enough members of congress to prevent that from happening, prospects are dim.