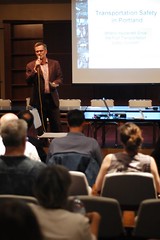 Portland Mayor Sam Adams — who according to a high-level traffic safety program staffer at PBOT “has done more than any other elected official to bring the safety issue to the forefront” — has chosen a date for the 2010 Transportation Safety Summit.

On the evening of Tuesday, February 16th, Adams will join with representatives from the Portland Police, the Oregon Department of Transportation, and state legislators to discuss safety issues with the community through short presentations and breakout sessions.

Details on the event are forthcoming, but below are some items we think are likely to be part of the agenda.

Funding will surely be a big topic. By mid-February, PBOT will have already submitted their budget, but then the Mayor’s Office will go through their own budget process to weigh safety concerns with other competing (but not necessarily unrelated) interests like maintenance, programs like Safe Routes to Schools (which was threatened with cutbacks last year), and non-motorized transportation projects. 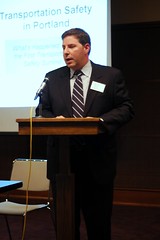 There’s also likely to be an update on new revenue PBOT will receive in coming years thanks to the passage of House Bill 2001. According to PBOT estimates, increases in the gas tax and vehicle registration fees will give them an additional $39 million to spend on transportation through 2012.

Another item we think is likely to be on the agenda is speed limits. Mayor Adams made it clear back in May that he wants ODOT to relinquish their sole authority to set speed limits. To change that authority, the City of Portland would have to lobby for a change to state law, which could take years. [For more on ODOT’s role in setting speed limits read our recent primer on the subject.]

ODOT’s Region 1 manager Jason Tell — whose region covers Multnomah and four surrounding counties — will play a prominent role in the summit. Tell recently stepped up for safety by pushing through some reforms in Metro’s Regional Transportation Plan.

The safety of people who walk on Portland’s streets is also likely to get PBOT’s attention. A string of collisions and fatalities put issue on center stage back in November, resulting in a statement from Mayor Adams, and a highly publicized demonstration in Southeast Portland.

Stay tuned for more details on this upcoming summit and make your plans to attend and be part of the conversations.

I really look forward to hearing more concrete information about what our mayor will do to make transportation safer. He definitely has done more than any other public official to put this issue in the limelight. The big question is, will he be able to stand up to opposition from auto user groups, ODOT leadership, and conservative voters

@Aaron Tarfman #1: Sam doesn’t seem to have any problem standing up to conservative voters!

ODOT, it’s true, may be a tougher nut to crack.

Don’t say never! I am embarrassed to admit I received a Photo radar ticket about 10 years ago across from the Safeway on Hawthorne (I had just left safeway and was clocked at 34 in a 25 Zone or some such thing as that). That was before I became a born again biker 🙂

I noticed a change in motorist behavior (drop in speed) on lower Hawthorne a year or two ago when the speed change first went through. But it was only when the double orange diamond change of traffic control flags were mounted on every speed sign, and only between Grand and 12th Avenue. Since then I think the speed has gone back up to what it was before.

Technically it’s a “posted speed” not a speed limit, by the way.
I attended the very first Safety Summit and found it lacking. Several of us talked with PPD about enforcement and the 10 mph “cushion” given to motorists with the photo radar. PPD blamed the judges, claiming striter enforcement (a lesser cushion) would cause the judge to throw out the citation.
Stop and watch next time you see a photo radar unit. It really is set to flash and photograph those going at least 10 mph over the posted speed. But, wait, there’s more. The put signs up in advance warning motorists “photo radar enforcement ahead” or some such warning. Still, people are speeding. What a bunch of BS! Enforce the damn limits!

Just to explain further, Oregon Revised Statutes requires that the warning sign be posted when photo radar is used–even specifies height of the sign and distance from the radar that it must be placed!–check it out at ORS 810.438.

Frustrating how nothing is simple….