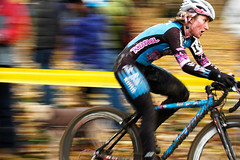 A racer streaks past the crowd during
the USGP’s Portland stop in 2007.
(Photos © J. Maus)

This weekend, the top men and women cyclocross racers from around the country will be in Portland to compete in the final race of the United States Gran Prix of Cyclocross. The two-day Stanley Portland Cup takes place at Portland International Raceway and nearly 2,000 racers and thousands of spectators are expected to take part.

Joan Hanscom, one of the event’s organizers, says some of the big-time names already registered include; Ryan Trebon, Todd Wells, Geoff Kabush, and Alison Sydor. Also competing will be local favorites like Erik Tonkin and Sue Butler.

This weekend is the finale of the 2009 USGP and Hanscom — who’s in Portland as of today checking out the course and preparing for the weekend — says they’re looking forward to a prototypically epic Portland event and course. “The weather conditions in Portland always test the riders – they have to be technically adept to handle the slick, muddy and technical course, they’ve got to be tough because the weather is, and they’ve got to be fit because the fields in Portland are always the deepest and strongest.”

But far from just a showcase for elite athletes, both Saturday and Sunday feature a full slate of amateur competition. The spirit in the amateur ranks is inspiring, says Hanscom: “The energy of the spectators and amateur athletes in Portland is amazing. Their energy is high all day – which makes it so much easier for us to do our jobs in usually hideous weather. We love it.”

Adding to the excitement around the USGP this year is that the cyclocross national championships are just one week later in nearby Bend. Hanscom says the proximity and importance of the two events are drawing a lot of racers from far beyond the Pacific Northwest. “We’re seeing huge numbers of registrants coming… to compete in Portland. We’ve got riders from New Jersey, Madison, and Louisville.”

More details at USGPCyclocross.com and browse more of the 2009 cyclocross season coverage here.