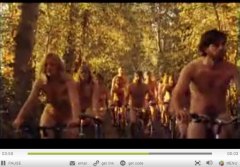 Still from video.
(Watch it below)

When The Flaming Lips announced they were looking for naked biking extras for their new music video, Portlanders responded in droves.

The resulting video for “Watching the Planet” has just been released to the public (after being screened in Portland at a party for everyone who was a part of making it). With scenes from Mt. Tabor and a beach on Sauvie Island, the video is sure to delight and amaze you, while adding further to Portland’s interesting reputation.

Check it out below (Note: Video has lots of naked people riding bikes and dancing around. Depending on where you work, you might want to wait until you get home before viewing):

Oh, I get it.
-talent+nudity=publicity

What’s with that giant rolling vagina?

I didn’t get into the video, but I still think it’s awesome he chose to do it here, and the shoots I was able to show up for were fun!

“the video is sure to delight and amaze you”

…or something that is not those words. Wow.

wayne was a super nice guy! and it was fun seeing how a video was made! steve what’s not to get the guy is a genius!

Wow, all white people. Disappointing and glaringly obvious. I think CCC’s on to something. If we want cycling to gain a larger modeshare, we need to look honestly at why it has so far attracted such a narrow demographic (as is evident with naked riders). I look forward to the day when being seen on a bike in this part of the country isn’t a political, economic, dietary, ethical, example/statement. It’ll just be how you choose to get around.

twistyaction: It was a very self-selecting group, of people who read bikeportland.org, were available for a weekday, were probably Flaming Lips fans, and who were willing to get naked and be filmed–which means a fairly small group of people. All this in one of the whitest cities in the United States. I would love to see non-white people in the video too, but it’s hardly a surprise that there weren’t.

I don’t understand how riding a bike naked for a music video says anything about my dietary preferences or my point of view on economics. I wasn’t making any kind of statement outside of a willingness to be naked on film for the Flaming Lips for free.

twistyaction, to put it another way (which is clearer now that I’ve thought about it): Looking at a video of people biking over, say, the Broadway Bridge over the course of a day, and noting that it’s mostly white people; says a great deal more about the percentage of non-white cyclists in Portland, than does a music video that happened to be filmed in Portland and Sauvie Island, and is entirely naked people.

One more comment and I’ll stop for now! I’m sorry!

Jonathan! You might not want the video to start playing automatically when you open the page. Is there a way to make it optional?

What I’m surprised by is the distinct lack of farmer tans on those cyclists! =P

Looks like a lot of fun both to shoot and watch. I was planning on taking the day off but had a deadline to meet and found out about the night and next-day shoots too late.

Portland nekkid peeps represent! Even if you are all a bunch of whities that upset other uptight whities.

twistyaction! Glaringly obvious- if we want cycling to gain a larger modeshare, we need to look honestly at why you aren’t fighting the good fight as we speak? Posting on a message board is pointless. Save the comments for the streets cause your comment is a real party-pooper. And, really, it can be applied to just about anything we see on tv. I choose to commute by bike because I want to… not because of my diet…or politics, or the fact that i am white.

they really should have applied those bright pink paper wristbands to the participants ankles instead. i think that took away the “natural” feel of the video. but it looked good other than that.

(Bike riders do tend to have much more presentable forms than the general US populace, don’t they 😉

I didn’t realise that Wayne traveled around naked in a big hairy vagina, classy!

Yeah, what is with the wrist bands? Is that supposed to represent each person being nothing more than a bar code, as in “just a number”? Or were they simply marking whose ID they had checked to avoid the subsequent embarrassment of naked minors running around in their video?

Anyway, it is interesting, and not bad at all.

you all have hpv now!

How did they find that many naked Portlanders without visible tattoos?

Other than my wedding this summer, this was probably two of the funnest days I’ve had this year. They even used the footage of Wayne in his bubble actually falling off the cargo bike rig. He was ok since enough people caught the bubble before he could hit the ground hard enough.

I shot about 60 gigs of “making of” photos/video that I’ll put online soon, I told Wayne I’d leave it offline until they got the video out.

@twistyaction of Diversity Police Union Local #242: I am also really disappointed that more non-white people don’t shop for groceries too. When I go to various stores around town all I see are white people. Grocery shopping should be more inclusive of all cultures. Sarcasm aside, we live in what looks/feels like the whitest progressive town on earth. Deal with that issue first then suddenly activities such as bike riding or grocery store shopping will become a celebration of diversity.

I loved the video. Very fun! Not only did I like the whole visual concept but the music was good too.

I would love to know how I could get my hands on one of those big bubbles for a Winter Solstice Dance that I am getting ready for. Please could anyone send me any info about it?

This won’t be funny when naked hairy men ride past my 3 year old daughter. Has Portland really just become an amusement park for hipsters?

Bob: What about hairy naked women? ‘Cause I have long hair and don’t shave anything, and I love naked bike rides.

Nudity isn’t going to permanently scar a three-year-old. All the kids I know that age love to take their clothes off. There was a toddler THERE who was naked with everyone else, and always near his mother.

Also, how do you know they were all hipsters?

Yeah, there were a toddler and a kid maybe about 7 up at Tabor, sitting right in front during one of the scenes. Before they shot the scene Wayne walked up to the Dad and told him exactly what was going to be going on and everything to make sure he was ok with it. The Dad was fine with it. The little boy couldn’t stop giggling when the girl came out of the ball.

@Bob: Although hipster bashing is getting quite dated (such as complaining about valley girls), so what? This town is a heck of a lot more fun than any other place I’ve lived in the last 25 years.

Argh! Accidentally hit the submit button, apologies for the typos/proofreading.

“There was a toddler and a kid of about 7 years old up at Mt. Tabor”

This was awesome enjoyed the music and the video. I had heard it was going to go but couldn’t make it. Glad to see that there were others willing to step up. Way to go Portland!!