[This story was written by Mark Reber] 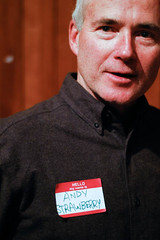 Portland’s emergence as a hub of bike manufacturing seems new and shiny like the paint on the bikes at this week’s upcoming Oregon Handmade Bicycle Show. But the area’s provenance as a leading force in the bike business has its roots, just like the roots of the builders themselves, in its early pioneers.

No one understands this better than Andy Newlands of Terra Nova Cycles (a.k.a. Strawberry Cyclesport). He started building bikes when leather was the preferred material for helmets. I talked with Newlands recently about those early years.

“I graduated from the University of Washington with a Civil Engineering degree in 1970,” he explained. “It wasn’t exactly the best economy for finding a job in Seattle, so I started looking at what I might do to earn a living. Somehow, building bikes came into view.”

“Back then, seeing Peugeots and Raleighs inspired those of us who had seen racing bikes only on posters. But, when I started building bikes, or wanting to build bikes, you couldn’t even find the parts.”

It wasn’t that transcendental. Newlands raced and followed racing. He came back to his home in Portland after graduation and, like many locals, was a customer at Kissler’s Cyclery. There, the legendary Frans Pauwels inspired a generation of riders.

“When I think about the bike business, I think about Frans,” Newlands said. “He really got us excited about riding bikes, about racing, about what you could do on a bike. Of course, he was competitive, too, and he showed us what it was like to be dropped on a ride. There were few that could hold his wheel for very long.” 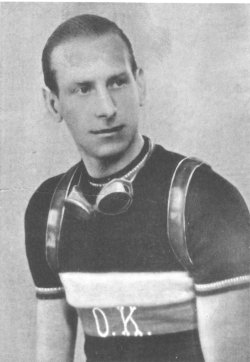 That sort of competitive drive and perseverance are as important today for the area’s bike businesses as they were in Pauwels’ day. His successful career in professional racing ended when he brought his wife and three children to Portland in 1953 from their native Holland. Ironically, his first job was pumping gas, not pumping the pedals. 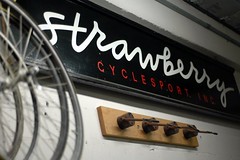 It wasn’t long before he took a job at Kissler’s and eventually bought the shop. For Newlands and others like him, it was a shrine to European racing, and, more importantly European bicycles.

“Back then, seeing Peugeots and Raleighs inspired those of us who had seen racing bikes only on posters,” Newlands said. “But, when I started building bikes, or wanting to build bikes, you couldn’t even find the parts.”

He did get some help after writing to an English manufacturer in the summer of 1971. Newlands proudly displays in his home a letter from G. V. Donovan, executive director of Carlton Cycle Works, Nottinghamshire, England. It provided some bare bones advice about how to get started. Much of it was humorous, but it also warned, “In all seriousness, custom frame building is not easy and you will need luck; I hope you get it.”

“We looked at the Oregon Brewers Guild as a model. We got together a notoriously independent group of builders to provide mutual benefits and raise the bar for all of us.”

Newlands needed luck but he also needed tools and materials. That same letter provided valuable information about where and how to source those. What he did have was a partner, another local legend, Mark DiNucci (profiled recently in the Portland Mercury).

He and DiNucci started building bikes together that same year. Their shop was located across the street from the building now occupied by River City Bicycles.

“I mitered and cut the tubes and Mark would braze them,” Newlands explained. “It was on the job training, but we produced some good bikes.”

DiNucci left in 1975 and went on to a career in the bicycle business with Specialized and Sapa Profiles of Portland. Newlands stuck with the custom bike building, but also explored another aspect of the business: tools. Today, Newlands says more than half his business comes from his custom-built tools, made for everything from bottom bracket facing to metal cutting.

To prove that custom frame building is not easy, Newlands has also gone back to his own roots as an engineer, at times, to lend his expertise to another form of transportation, light rail. He pointed to the West Hills from his booth at the Goose Hollow Inn. 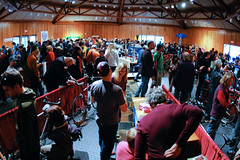 “In the 90’s, I put my degree to use to help with the design, then construction of the West Side Light Rail Line,” he said. “I worked on the tunnel by day, but I kept the bike building going at night, in the basement.”

By the 1990s, custom frame building was no longer an esoteric or isolated craft. Bill Davidson and Richard Sachs in Seattle, Ben Serotta in the Saratoga, New York and a host of other large and small builders were plying their craft. As growth continued and began to take off, it wasn’t long before frame building would be one contributor to an industry that would be taken seriously in Portland. According to Alta Planning and Design’s 2008 update to their original 2006 study, the Portland economy gets $90 million in direct economic value from bicycle shops, builders, accessory makers and services.

And, with that growth and its impact on the local economy came nudges and advice to put a trade association together.

Newlands heeded that advice and the Oregon Bicycle Constructors Association (OBCA) was born in 2006.

“We looked at the Oregon Brewers Guild as a model,” Newlands said. “We got together a notoriously independent group of builders to provide mutual benefits and raise the bar for all of us.”

Newlands, a founder of the OBCA and currently a director, pointed to the types of association or guild services that may help set Oregon builders apart. One example would be frame and fork testing along the lines of the European CEN standards.

“Quality standards could be something we make available to members either through outsourcing to existing labs or, possibly, in our own lab,” Newlands speculated. “Testing is familiar to me as an engineer, but it’s not something that custom frame builders have had much exposure to. However, it could be something that helps set OBCA members apart.”

For the builder, though, the toughest part of the trade may have nothing to do with torches or cutting tools.

Ben Farver of Argonaut Cycles, who shares shop space with Newlands, said making frames can be relatively easy, but creating a sustainable business model is not. 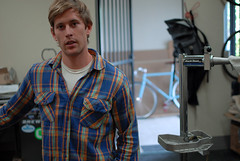 “I came to bike building from a degree in history, but with an individual aesthetic about the artisanal craft,” he said. “I like to make bikes that are cohesive and highly personal. But the tough part of the trade is finance and marketing.”

Newlands agreed with his young shopmate’s assessment and pointed to the OBCA as one source where builders might find help with those issues. He said the successful 2007 Handmade Bicycle Show was an example.

“We had 27 builders exhibiting their bikes and more than 2,000 people saw them,” he explained. “That’s the kind of exposure that can bring awareness to new and experienced builders alike.”

That show represented frame builders, but next weekend’s event, like the OBCA itself, has expanded to include frame builders, the United Bicycle Institute, accessory and component manufacturers, apparel makers, and even everyday enthusiasts.

Newlands is excited about this weekend’s show. The number of vendors with displays has increased more than 30% and he hopes for a similar increase in attendance.

There are 37 frame builders and associated businesses confirmed for the Oregon Handmade Bicycle Show. It’s open to the public Saturday from 9:00 to 6:00. Admission is $8 and includes a pint glass or water bottle (while supplies last). After the show there’s a Halloween costume party with live music from Chervona from 8:00 to midnight. The show continues on Sunday. Full details at OregonFramebuilders.org.

— Special thanks to Kelley Dodd for her help researching this story.

Too awesome. Thanks for the effort of collecting all of the info in that story.

Doesn’t Strawberry supply frame building parts? I always suspected that mostly because of this, Strawberry was an incubator for many of the frame builders in the area. That connection is still a little unclear to me. At the very least maybe the business was inspiration for others who saw the bikes around town.

It would be super cool to see a photo of Kisslers.

Andy is top notch, and his LAN71 tools are the quintessence.