[This story is part of our ongoing coverage of the six-week Oregon Manifest event. See all previous coverage here.] 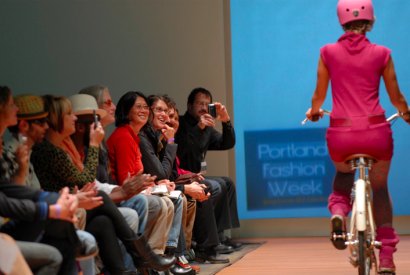 The fashion world got an eyeful of bicycles when Portland Fashion Week hosted the Ready to Roll show on Saturday.
-Slideshow below/Gallery–
(Photos © J. Maus)

The fashion world and Portland’s bike scene will never be the same following Saturday’s Ready to Roll show. Produced by Momentum Magazine as a benefit for Oregon Manifest, the show helped put to rest the notion that in order to ride a bike, you have to wear spandex or neon (or both). And, for many of the professional models (who pedaled down the runway) and industry types in the crowd, it was an energetic and fun introduction to kinetic fashion.

“This is just a fun way to widen the perception of what cycling can look like.”
— Amy Walker, publisher of Momentum Magazine

The show was an official event of Portland Fashion Week. That meant this wasn’t the type of bike event many of you might be used to. For starters, the show happened way at the northern end of Swan Island in an industrial shipyard warehouse. That location, as well as ticket prices ($18.75 at the door) that were a bit steep for some, meant that the bike crowd wasn’t as thick as usual.

But that was actually just the point. This wasn’t about appealing to the bike crowd, this was about putting bikes and bike-specific fashion in front of the Northwest’s top style-makers and fashionistas. And on that account, the show was a smashing success.

The first sequence (that’s fashion show lingo for the opening act) featured the familiar faces of Portland’s beloved Team Beer along with local racer (and former UPS bike delivery-woman) Tina Brubaker. And, I must say, for a bunch of runway newbies, they nailed it.

Tina beamed as she confidently strutted her stuff in a Nau jacket and tight leggings astride a gorgeous Soma mixte. Kevin also sported a Nau jacket, and completed the look with a plaid flannel, striped socks, and of course, his Team Beer cap. John went for the serious and studly look in his big puffy jacket and black jeans. Kevin Beth and Danielle showed that ladies can ride in mini-skirts. Amber looked like a pro as she removed her jacket to reveal a tight-fitting, long-sleeve top and an eye-catching necklace. 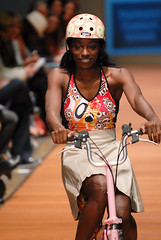 On stage, they whooped it up, playfully interacting with each other and letting the crowd know that cycling is sexy — yet not too serious.

The professional models that followed seemed to feel the fun vibe and did their best — despite nerves from having to pedal and walk with a bicycle on the runway — to keep it going. One person in the crowd told me afterward that it was the first time he’d been to a fashion show “when all the models couldn’t help from smiling.” 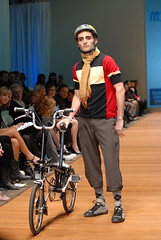 Nedim showed the crowd what
his Brompton could do.

Model Nedim Korkmaz from Turkey rolled out on a foldable Brompton. After he dismounted, he expertly flipped up the rear wheel, than flipped it back out — all while maintaining his focus on the lenses of the photographers. After the show, Korkmaz, who moved to Portland from Turkey back in January and rides “occasionally” to classes at Portland Community College, said he practiced the move several times before the show. “I wanted to show the crowd that a bicycle can be used different ways.”

Korkmaz and the other models looked amazing as they rode smoothly down the runway. It was exciting to see them wearing local brand names like Nutcase helmets, bags from Queen Bee, hand made shoes by Jeff Mandel, and clothes from Nau, Icebreaker and Castelli.

Bike industry companies were well represented (Sheila Moon and B. Spoke Tailor’s stuff was hot!), but not all the fashion was bike-specific. And, why should it be?

One woman (see below) stole the show in a red, flowing Betsey Johnson summer dress and sexy stiletto heels. When she first strolled down the runway, I thought, “Oh come on, that’s not bike fashion,” but by the end of her turn, I thought, “Hell yes!”.

The models weren’t the only ones looking fantastic on Saturday. The crowd and the bike racks were full of stylish folks. Here’s a bit of the off-runway action:

One face in the crowd was former Nike Vice President in charge of apparel Stephen Gomez. Gomez, who’s now on the BTA Board and just returned from a trip to Amsterdam and Copenhagen, said he felt the show “struck a good balance between fashion and fine-tuned bike clothing.”

“Bike fashion has really come from two places; messengers and the fashion world. Somewhere there will be a merger because they’re really coming toward each other now.”
— Stephen Gomez, former Nike VP of Apparel

I asked Gomez if fashionable clothes with bike-friendly details will ever be accessible enough for people without a big budget or friends in the industry. He said the problem is with the market. It’s just not big enough yet for a large company with the distribution and manufacturing channels to step in and make less expensive clothing a reality. “It’s a hybrid market between pure fashion and real riding. Adding performance is important, but fashion always tends to be expensive.”

Gomez added, “Bike fashion has really come from two places; messengers and the fashion world. Somewhere there will be a merger because they’re really coming toward each other now.” 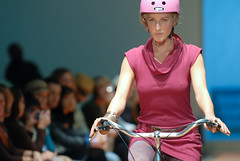 “We don’t care about fashion for fashion’s sake. We care about people riding bikes and they have to wear clothes. This is about expression… We express ourselves through clothing and it helps to have some examples so we’re creating that imagery. This is just a fun way to widen the perception of what cycling can look like.”

For more of the styles on and off the runway, watch the slideshow below or browse the gallery (gallery includes the Concours d Elegance event and afterparty):

remember when fashion designers jumped all over grunge? and you thought “wtf? this is just what i wear? why do i need it re-packaged with the price jacked up?” or maybe you think of fashion designers hyping a “punk” look? or just pick anything you’re into that has been co-opted, branded and sold. this is what pops into my head with stuff like this. maybe i’m off base, i’m sure everyone involved has the best of intentions.

“Bike fashion has really come from two places; messengers and the fashion world. Somewhere there will be a merger because they’re really coming toward each other now.”
I disagree – messengers are only a small percentage of all bicyclists. Most bike fashion that is currently out there is a smart combination of personal style and functionality. If the regular fashion industry wants to be successful in this market, there needs to be a re-thinking of form, function… and sizes!

there might be few messengers overall, but their impact on fashion has been huge… so in that respect, I agree with Stephen.

Just FYI, Stephen also spoke about how important he sees NYC in this equation. They are the seat of the U.S. fashion industry and they are doing a lot to promote bicycling. Because of that, they are likely to be the bike fashion trendsetters of the future.

bikesnob has a few remarks on the biking image in today’s “blogticle”.

PS: sorry; I should have written “cycling image”

“You think that you’re too cool for school, but I have a newsflash for you Walter Cronkite… you aren’t. ”

I feel so foolish now! To think that I have purchased cycling apparel for maximum visibility, weather protection, and to guard against third degree saddle induced crotch rash.

See, that’s where everybody goes off the path, so to speak…it’s just about the (normal) clothes you like (whatever those are) and THEN get on a bike (Cycle Chic’s true meaning). Just a matter of accommodating your clothing style with the appropriate bike. Very simple and comfortable.

Too much “bike fashion,” not enough “fashion (with bikes!).” That said, it was great to see bikes and Team Beer on the runway. Great work, Momentum!

i still can’t get over how gorgeous Tina Brubaker is. dammmmmmmn.

Let biking be what it is, getting from one place to another in whatever comfy and safe getup works for you; this is just another whoring of business and media moguls grabbing whatever is trendy and making money by sexing it up. Fashion is failing, old and lame … and for the middle aged.

Just curious,
#6, from Nick V: for whom was that reply? Or to put it another way, WHO is not Walter Cronkite?
Ride safely.

Great…now we have to be “fashionable” to ride a bike?

This is yet more proof that it is possible to look great while riding.

“We don’t care about fashion for fashion’s sake.”

Two can play that game. From the rest of the fashion industry: “We don’t care about bikes for bike’s sake. Gimme me more dresses, DAMMIT.”

No malice was intended. Talk of modeling and runways inspired me to quote a line from “Zoolander”. Worth renting and even buying if you haven’t seen it. “Orange Mocha Frappuccino!!!!”

Thank you for the awesome write up and photos! I wasn’t able to attend the show and it is super-cool to see this!

How cute and fun! I love it!

I often like to dress cute–not always with the current fashion–and I like doing it on my bicycle too! But like everyone else, some days I just wear what’s comfortable and functional.

Fashion and style should be fun. Wear what you like!

you know, in many cycling circles, lycra is a fashion statement. too (not that I’d be caught dead in the stuff…)

It’s simple. If you are going out on a sport ride lyrca is perfect. If you are Touring then lycra or some more Rivendell style stuff is perfect (depends on you), and if you are riding your bike around town to different places all day because you don’t drive – then this style of bike fashion is perfect.

I have full lycra kits for sport and practical around town clothes for normal riding days. Do I really need to pick a side?

None of these photos sport traditional logo covered lycra racer clothing! WTF? Is that too long fashion dying or dead?