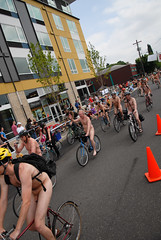 Coyne went on, “So I read a couple stories about the naked bicycle riding. I know Jillian [Kelsheimer Sevick, former BikePortland neighbor and currently merchandising manager for the Flaming Lips] from Portland and thought — I wanna do it for a video.”

The plan for the shoot makes Portland’s annual naked bike events sound fairly run of the mill. “I’m having one of my giant space bubbles covered in fake fox fur,” Coyne said. “Its going to look like some giant fur egg, and the people on bicycles are gonna sort of be born and erupt out of this fur, vaginalistic thing.” 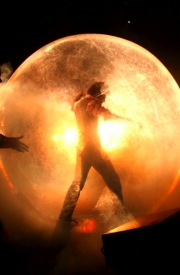 Coyne in a “giant space bubble”
(Photo by Flaming Lips)

As with other naked rides, the event is meant to be freespirited rather than lewd, Coyne said. “There’s a difference between pornography and just freaks who are naked. This is about unrestricted freedom and a good lawlessness that’s always sort of implied at our shows.”

The video is being made for the final song, called “Watching the Planets,” on the Flaming Lips’ upcoming album appropriately titled Embryonic. The song is “an epic…march, almost. It goes on this hypnotic groove,” Coyne said. The video’s concept is still emerging: “Maybe I’ll even get naked for the video, too. I don’t even know how it ends — maybe it ends with them all getting clothed and making me get naked and shoving me back into the giant fur egg. I just came up with that right now.”

The shoot is from 10am to 10pm on Wednesday, September 23rd. Participation is on a drop-in basis. The sign-in table will be the basketball courts near the top of Mount Tabor.

Here’s what the crew is looking for (via an email from Sevick Kersheimer):

For the sake of the shoot we would rather no tall bikes or abnormally small bikes, it’s just easier on the camera guy, George. Though if some show up I’m sure they will figure it out. We are looking for things to be as natural as possible so we are discouraging costumes and body paint. Though if people want to make themselves shiny with baby oil or something, that will play off the lights well!

Shooting will go on all day, so participants can join the fun for the entire 12 hours, or just drop by for an hour or two. No RSVP is required, just show up (clothed, please!) with valid ID.
There you’ll be greeted by Coyne and the Flaming Lips crew, who will set you up with a release form, a sign up sheet, and a secure area to stash your clothes.

Coyne says that the video should be available for viewing within about two weeks after the shoot, “so long as i don’t get arrested and nobody gets hurt.” The record is set to be released in the second week of October, and this is one of there or four music videos they’re hoping to release concurrently.

I suppose this will be my warm up for the Blind Date at the Dairy cross race!

Wayne Coyne with all his Zoobomber friends and rap music DOES NOT represent regular everyday bikers! How dare he?!

(This sounds awesome. I want a giant egg covered in fake foxes.)

Sounds like fun. I’ll have to check my PTO balance.

This is Portland, after all…

I’M THERE. Period. End of story.

I’m out. The world is not ready to see that…

ohhh wow thats very interesting something to see thats for sure

Free to be you and me

quote: if people want to make themselves shiny with baby oil or something, that will play off the lights well!

cool. there is no shame in the human body. But in San Francisco the problem with Baker Beach was that it was an easy target for some people with mental heath issues watching from far and sometimes too close. Given this is public property, how is the band going to keep things safe if some dude shows up and causes trouble?

The free thing about the world naked bike ride is the safety. The whole group is a moving target, and if someone causes you discomfort, it is very easy to go slower or faster and not see them again.

Is it required to be completely naked?

Ohh my, what am i going to wear?

Time to wax the brownstar.

I love this town!

After the mind-blowing show they threw down for us at Edgefield in August, I think we owe ’em this much. We’re there, Coyne. Just tell us where to stash our pants.

It would be great to see a good turnout for this. Sure there were a few thousand during the midnight ride this year, but only about 50 at the midday ride. Be brave people! Tell your friends!

That headline is so Portland.

will i not get arrested for doing this?

yea… i was the nekkid guy cuffed & stuffed in vancouver on todd’s aloha low bar crawl. the 1st time i’ve been arrested (yes i was booked nude) and i’d like to think i’m not a repeat “offender”.

my next court date is monday the twenty-first. to the folks that were on the ride~my public defender would like your name & phone # so you can state to my intent. please contact or leave a message with neil anderson (my public defender) at 360 906-7234 if you are willing to go to bat for me.

if you are opposed to this sort of freedom of expression…. my bare ass would like to give you a big smooch!

seriously, there’s gonna be like 10000 people that show up i bet. tabor is going to be like a frickin nuthouse! which, of course means i’ll show up.

the so-called “nude scene” in the musical hair is at the end of the first act, before the intermission. a simple be-in in central park, no climbing of mountains or blood or fire or new civilizations.

vaginalistic is my new favorite word.

#12: Call me crazy, but I would bet that most any film or video shoot is going to have security. The film industry temporarily gathering to shoot a production is quite different than a nude beach. Just a hunch.

See you there PDX!!!

most extras just stand around a lot. rather than just roll for 100 feet and have it end perhaps we can organize a more substantial ride afterward.

vantuckymatt #21… I spoke with your attorney and he tells me he specificaly needs to talk to someone who was with you at the time of arrest.Since I wasn’t,I could offer little help. Anyone who was on the ride in question who was near Matt and witnessed the arrest, please call his attorney,listed above in post #21.
That said, I am glad Oregons Constitution regards nudity as a form of expression. And I am happy the Flaming Lips are doing this shoot in Portland, not across the river. We can be pretty smug about nudity here, but it aint so everywhere. I bet even with the Oregon Constitution, police in Gresham or Roseburg would respond more like their Vancouver counterparts.

KEXP just played a new Flaming Lips song and mentioned this on air.

Oh man… I need to get back home!

oh…i am jealous…will have to ride around psp in your honor…lucky pdx.

Remember what happened when Dave Chappelle showed up in Portland and told a few people about it. There are going to be a LOT of people here. Please stay home if you’re not up for getting naked.

I have a lot of personal appearance issues. I’m a bit overweight and I’ve hated my body for most of my life now. But for some reason, I find myself unable to find a feasible reason not to do this. I am so excited for this, it gets my heart rate up.

Thank you, Flaming Lips, for giving me the perfect reason to kick myself in the right direction of positive self-esteem!

Now, if only I could convince someone to go with me…

Prefunk at Radio Room on Alberta Tuesday tonight. They have Lips specials and will play Lips tunes. Patios and bike parking. Hopefully Wayne shows up for a strategy meeting…or a beer. Either way, I’m in.