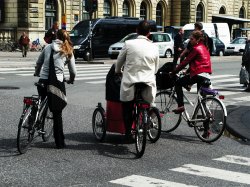 Coming soon to Portland
(in more ways than one).
(Photo: Mikael Colville-Andersen)

Dreams on Wheels — a major exhibition of Danish cycling culture and its impact on urban design, transportation and society — is coming to Portland in October.

The exhibit is being brought to Portland through a collaboration between the City of Portland, the Danish Embassy, and organizers of the six-week Oregon Manifest event. Dreams on Wheels is a traveling exhibit that, according to a press release “merges urban cycling culture, design intelligence, and environmental consciousness”. The exhibit features case studies on how cycling has affected Danish culture and society.

Portland’s bike story will also be featured in the exhibit. City officials and event organizers are putting together a display to feature photographs and other visual representations of Portland’s bike culture.

The Portland stop is a coup for Oregon Manifest organizers, who have expanded their event way beyond just the focus on custom bicycle builders it had last year. Jocelyn SyCip, director of the event says “Oregon Manifest has expanded this year to broadcast the many ways cycling can impact our lives.”

The exhibit is set to open in Portland on October 9th with a special reception and opening festivities that will be attended by the Danish Ambassador to the U.S., Friis Arne Peterson. Also coming to Portland as part of Dreams on Wheels will be Danish filmmaker, photographer, and journalist Mikael Colville-Andersen of the popular blog, Copenhagenize.

Dreams on Wheels has previously made stops in Paris, Tokyo, Edinburgh, Moscow and London. In Portland, the exhibit will run from October 2nd to November 8th at the Oregon Manifest’s Pop-Up Bike Union Storefront located at 539 NW 10th in the Pearl District.

Sorry DwaineDibbly… the opening party is the 9th and the soft opening is the 2nd. — Jonathan