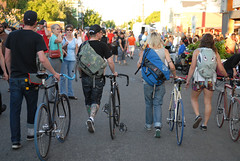 Mayor’s office would rather have folks
park… and then walk during Last Thursday.
(Photos © J. Maus)

Shoshanah Oppenheim, the Mayor’s staffer who has been working with the Alberta community on the carfree Last Thursday, said they want to clear up as much space for pedestrians as possible for tonight’s event.

She got in touch with us today in hopes that we’d ask everyone who is riding a bike to Last Thursday on Alberta to please consider locking the bike up instead of walking with it. The City expects huge crowds and Oppenheim says the City has partnered with the Community Cycling Center (NE 17th and Alberta) to provide additional bike parking capacity for tonight ($1 suggested donation). The idea is to centralize bike parking to free up pedestrian space. 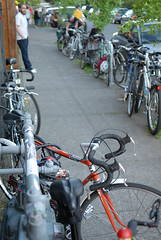 A side street during Last
Thursday in May

In addition to parking at the CCC, there is a new bike corral at NE 31st in front of Vita Cafe and of course staple racks along Alberta and on side streets (which are usually filled up, as you can see from photo at right).

I think this is a good suggestion. This is not a mandate from the Mayor’s office, it’s just a request to remind folks to be conscious of the crowds and that more people can fit on the street if less bikes are being pulled through.

That being said, I think a lot of folks (including myself), tend to start on one end of the street and walk a few blocks with their bike, so it’s not convenient to lock it up. And then there’s everyone who would never consider locking up their bike because, as we all know, in Portland they’re a must-have fashion accessory.

Hopefully the extra racks provide enough space! After getting slammed in the back of my leg by a sharp bike pedal at the Mississippi St Fair I hope more people walk. Or just pay attention.

Do everyone a favor, lock up your bike, pick up your trash, and be mindful of your noise level when leaving. The neighborhood would greatly appreciate it.

I must say that I bike everywhere but I seldom walk the bike anywhere. It’s hard enough to keep track of where my two feet are going, plus I hate banging my shins on my pedals.

Sounds like a good opportunity for bicyclists to show their consideration by taking the bus.

See that wall of cycles in the photo?

Don’t be those people.

Taking the bus??? Are you saying that I shouldn’t even ride my bike to Last Thursday? Are you seriously suggesting that it would be inconsiderate to do so? Just wow.

But I do agree with Carlos. Always a good idea.

Funny, this on the heels of the O piece yesterday about walking bikes as a fashion statement. I’m with peejay though. I think a nice request to cyclists to at least be aware of the problem is perfectly fine. However, this particular request seems to cross the line and is actually a discouragement.

Maybe it’s time to revamp commercial sidewalk use, ’cause at the heart of any problem like this is that of high usage levels. Sidewalk congestion of this sort is usually the result of some commercial event. Even if it’s just people lining up for entry into a venue, public use should always take precedent over the interests of business.

So, how about requesting business owners benefiting from Last Thursday if they might try to help with congestion? This more to spread the blame around, and avoid singling out bicycles. You know, if the city feels obliged to blame any one for plugged sidewalks that is.

The Mayor’s office is now requesting that you don’t walk at Last Thursday due to walking congestion.

#4: They are lame. If they were riding, and could control them well at <3mph, they’d take up less space. But yah, ride ’em or park ’em. But please ride instead of infernal combustion everywhere and anytime you can.

(I have ridden my bike through crowds like that and on sidewalks, but I can ride at walking pace and trackstand at will on the fixie. I’ll park at the first opportunity usually. Otherwise I’d feel like a dbag.)

Just got back from Alberta — walked up there on my own two feet. The street was pretty crowded and there were a lot of people riding, walking, and standing with their bikes in the street and on the sidewalk. There were bikes locked to every stationary post in sight — except for in the CCC’s valet bike parking zone, which only had three or four takers when I went by, and lots of empty space. Photos coming soon.

please let us know what events we’re allowed to ride to on advance so we don’t show up with too many bikes. Wouldn’t want anyone to know what’s going on, would we?

And Vance is with me? Ick!

After getting hit TWICE by a reckless pedicab driver at the previous Last Thursday while walking (without any apologies or acknowledgment), I’m all for this.

It’s crowded enough to ask bikers to avoid riding at this event.

phew….less bikes to dodge did afford me more attention to avoiding the dude roller blading in an inflatable cow costume.

i feel this will get the message across better:

Funny to think that a year ago, CARS were trying to roll through the crowds-what a nightmare! Good to see this level of enthusiasm and I agree that parking the bike makes more sense. But discouraging people to ride THERE is just silly. Ride there, park a few blocks away (or get there early), ride back.

Re: CCC’s bike parking.
I have honestly never even noticed it until last night. Maybe I’m too involved with whatever is going on along Alberta.
Perhaps a big sign pointing folks to the bike parking at CCC, maybe there is on and I’ve not noticed that either. 🙂
Either way, it seems walking the bike is a sorta lame-o fashion statement and there was still plenty of that last night.
How can CCC get more visibility for their bike parking?

I attended Last Thursday last night and had a hard time finding a place to park the bike near the roadblock at 15th…if I ever go back to this event, I would definitely use the CCC parking area.

I’m guessing the problem was that people naturally want to park their bikes at the beginning / end of the street closure, not in the middle of it– where the CCC is located.

I think much better signage is needed if people are really going to lock their bike up in a central place…like big arrows at regular intervals or on the street closure barricades. I walked there since I like a block away, but I didn’t even notice CCCs bike parking offer even though I walked right past.

I would also say that it was a little annoying to have an impromptu bike parade try to roll through the center of the crowd at ~9:00 or so, ringing their bells furiously and trying to get people to move out of their way so they didn’t have to stop their tallbikes. I am all for bike parades, but it sort of seems like critical mass in reverse when you try to bike through a crowd of pedestrians…

Overall I didn’t think the number of people walking their bikes around was that bad. I would rather people ride than drive to first Thursday, though I did let someone park their car in my driveway since they couldn’t find parking (my cars were taking up the street parking and blocked in)

Who would even want to push a bike through that crowd? Or ride in it for that matter.

Or even be there! Seriously, am I missing something on Alberta that is interesting enough to make me put up with being in that herd?

I live about two blocks off Alberta and I avoid Last Thursday like the plague.

The only time I bring my bike into the last thurs. crowd is when there is an awesome Michael Jackson bike dance flash-mob.

Someone, or the city should start a bike valet. There was one in Santa Monica for the local Farmer’s Market. Basically, it was a strip on the side of the street with a long removable “rack” where valets would take your bike, rack it for you, and give you a ticket. They would watch the bikes so you didn’t need to lock it up. Cost was a $1. It was great because it was hard to find available bike staples around the area. You ride up, hand off your bike, and enjoy your time.

CC could do a lot better if they would even advertise for this service! i couldnt even find it on their website!