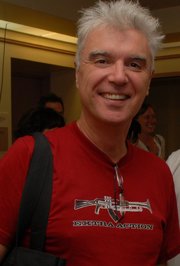 David Byrne, the musician and artist who has also ridden a bike as his main form of transportation for decades, will kick off the promotion of his upcoming book, Bicycle Diaries, with an event in Portland on September 30th.

Byrne played a sold out show in Portland last month and he’ll hope for a similar showing for an event he’s partnered up with Powell’s Books on called, Where We’re Going and Where We’ve Been – Bicycles, Cities and Transportation in Portland.

The event will be held at the Bagdad Theater (3702 SE Hawthorne Blvd) on September 30th at 7 pm. Here’s the blurb from Powell’s:

Byrne’s book is available for
pre-order from Powell’s.

Byrne is fascinated by cities, especially as visited on a trusty fold-up bicycle. In Bicycle Diaries, musings from his years cycling through such places as Sydney, Australia; Manila, Philippines; San Francisco; or his home of New York, the former Talking Head offers his frank views on urban planning, art and postmodern civilization in general.

Each of the three speakers will have about 10 minutes on a different topic. Mia Birk will speak about the past/present/future of bike planning in Portland, Timo Forsberg will talk about Portland’s bike culture (he is a veteran of the scene), and I’ve been pegged to talk about “bicycle activism”.

It should be a very entertaining and enlightening evening. (If anyone has suggestions about what I should talk about, get in touch.)

Tickets for the event go on sale next Wednesday (7/29). The $26 price includes entry and a copy of Bicycle Diaries. Tickets will be available at the Bagdad or Crystal Ballroom (1332 W Burnside St) box offices or via Ticketmaster.

Funny, haven’t you stressed repeatedly that your not a “bike activist” ?
(which defies sense to me it seems since you run this newspaper)
Anyway, welcome to little Beirut David !!

‘Rocker’ not so much.

Do they even know that Timo saw him play with Talking Heads at Toads Place like in ’78 or ’79? Wow! Now he gets to be on the same stage as David Byrne. Good thing the Bagdad stage is bigger.

…but does Jeff Mapes get to review “Bicycle Diaries” for the NYTimes?

two silver foxes for the price of one? I’m sold…