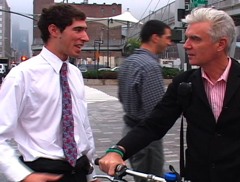 David Byrne, NYC resident, former Talking Heads front man and biking’s coolest celebrity endorser/advocate, will be in Portland this summer and he’s got a bike book set to be published in September.

Byrne — a daily bike commuter for 30 years — has made a big name for himself in biking circles for (among other things) his advocacy and involvement in the New York City bike scene. He collaborated with the NYC Dept. of Transportation to design a series of art racks, and in February 2007 Byrne joined carfree advocate Gil Penalosa and staffers from NYC’s Transportation Alternatives for a bike ride that was captured by Streetfilms.