I’ve got great news for bike lovers and horrible news for bike thieves… It’s been about four years since we first launched the BikePortland Stolen Bike Listings and now, after a long hiatus, they are back and better than ever.

But before I share more about our new and vastly improved listings, let me share how we got to this point…

Back in the day, I would input all the listings manually. But once we started recovering bikes (so many that I actually stopped keeping track), word spread quickly (the media loved it) and I couldn’t keep up the manual entry (I knew something had to change when I answered my phone in the middle of the night and a woman was sobbing on the other end as she described her stolen steed).

Thankfully, about a year after our listings launched, I teamed up with web programmer Michael Jones. He knew his skills could make our listings better and together we created Finetoothcog and integrated it tightly with BikePortland.org (listings on Finetoothcog would automagically appear here). 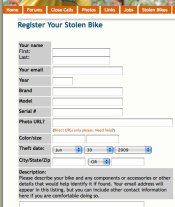 A screenshot from our new listing page.

Unfortunately, due to a technical glitch (and the fact that Mr. Jones got very busy with work that actually paid the bills), the Finetoothcog/BikePortland Stolen Bike Listings went kaput in February of 2008. Since then, I just have not had the time or inclination to make them work again. Until now…

At the beginning of this year, I connected with Bryan Hance. Bryan is the guy behind StolenBicycleRegistry.com (SBR), a national database of stolen bikes. With an assist from Michael Jones, Bryan and I got together to figure out a way to bring BikePortland’s listings back to life.

After a lot of tinkering, the result was a WordPress plugin created by Bryan that integrates bike listings on BikePortland with the larger (and more sophisticated) SBR database.

Thanks to Bryan, listings submitted here on BikePortland are also listed in the SBR (and the two stay synced, even if a listing is edited after the fact). This is important, because once your stolen bike is a part of his listings, they are added to the SBR “Watchlist” emails sent out twice a month to over 400 subsribers, and they are available to anyone using the SBR serial number search tool (which also has a mobile version).

We’ve also set up a separate Twitter feed, @StolenBikesPDX, for all our listings and so far over 70 people are signed up. In addition, we have about 170 people (mostly local bike shop mechanics who watch their service areas for suspicious bikes) who subscribe to the RSS feed (and/or a digest email) of our listings and the most recent listings are posted on the sidebar on every page of BikePortland.org.

We’ve already had 45 listings since we soft-launched this new feature at the beginning of June, and they’re already having an impact! Portland police officer Robert Pickett told us last week that he seized a stolen bike, but had no idea who owned it. But, once the woman posted her bike on BikePortland, Pickett saw the listing, returned the bike to her and put together a decent criminal case against the suspect.

We’re still tweaking things, so your feedback is appreciated. Check out our previous Bike Theft coverage and stay tuned for more news about this tool and articles about how to prevent and recover stolen bikes.

You can list a bike, check current listings, and learn more at our Bike Theft Central Page.

Want to help support BikePortland and get some valuable exposure for your business or product? We are looking for a promotional partner to sponsor our Stolen Bike Listings feature. If you’re interested, please drop us a line.

Awesome! Great work Jonathan and thanks to all those who contributed.

Sounds like the first recovery could be a story deserving of its own article.

Great work, Jonathan. This is a wonderful service to the community.

Huzzah! and slick! and thanks!

Well, there are still a few minor glitches here and there but they all my fault, not Johnathan’s. 🙂 We’ll get them ironed out.

But, seriously, if your bike gets stolen PLEASE PLEASE register it with the cops and the SBR – there are a lot of decent and honest people out there on the lookout for hot bikes.

I just had a listing from 2007 pop up as found on the SBR this morning, so there’s always hope, even years later, for getting your ride back.

Does this service scan Craigslist too? Because that was such a cool feature of the old version.

As for craigslist scanning no that is not a feature, however you can set that up fairly easily yourself…

NOTE: You can also setup a ‘saved search’ on Ebay.

hey MJ…. I’m just curious… if it is a relatively easy thing to set up for each user to scan Craigslist, why not incorporate it into the real deal. Then its one less place that a person with a stolen bike has to go look (or set up an automated RSS feed….)

I second Jessica’s comment that craigslist scanning “was such a cool feature of the old version.”

oh… and thank you VERY much for getting this back up and running. This is such an important tool and resource for people.

I have a couple of questions. I checked the page, but the answers were not immediately obvious to me.

1) If have parts of my bike stolen (i.e. my seat and post recently had that fate) can I list them? or must it be an entire bike.

2) Is that 503-823-3333 number good for making police reports in the entire area? I would think there would be different numbers if you aren’t immediately in Portland proper. It may be helpful to list those for people as well.

Thanks again for getting this up and running!

Historically one of the most exciting parts of bikeportland has been the stolen bike justice stories. So glad to have this back!

I’m happy to hear there is someone tracking stolen bikes. As someone who’s had bikes ripped off, it sucks.

But that’s a pretty disgusting photo to publish. What, all homeless dudes at Waterfront have stolen bikes? come on…
Bike thieves come in all shapes and sizes, including lots of middle class kids from the suburbs, and people that are much more tech savy that a waterfront squatter.

But I want to re-inforce that I think this is a cool project and I applaud bikeportland for their advocacy in this regard.

I hope everyone is also aware of the National Bike Registry program. For $10 your bike is registered in their database for 10 years, or $25 for 30 years. If you get a different bike you can change the registration for the remaining duration. Law enforcement agencies get free access to the database so they can return stolen bikes to their rightful owners. After registering my bike, I was surprised to see that hundreds of police departments across the country participate in the program, but none of the police departments in the Portland/Vancouver metro area do. I sent an email to several local police departments asking them to participate in the program, but after two weeks so far only the Gresham Police have responded, vaguely saying they would consider it.

I would like to encourage BikePortland readers to email local police departments and ask them to participate in the NBR program. It doesn’t cost police departments anything, all they have to do is contact the NBR. Considering how much we love our bikes in this town, we should demand that the police take advantage of such a great resource, there’s no reason they shouldn’t.

Is there anything Officer Pickett can’t do?

“Is there anything Officer Pickett can’t do?”

Get a word in edgewise when I corner him at a social event. (I really gotta stop doing that.)