The official unveiling happens tomorrow, but I just came across the first photo of the new Zoobomb Pyle as it stands right now, fully installed, at the corner of 13th and W. Burnside. 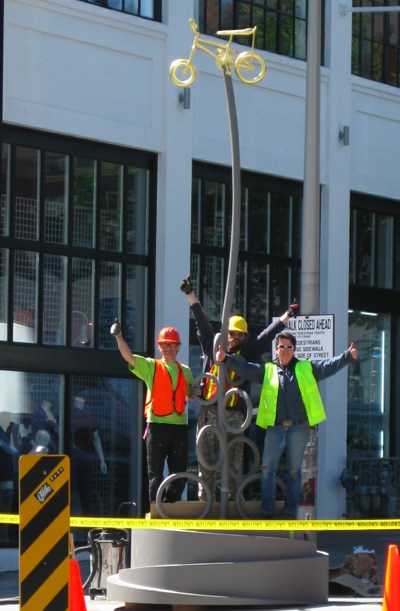 Yes, that is a gold mini-bike.

I am so proud.

This is something you’ve got to see in person… especially once it becomes complete with the adornment of a pile of mini-bikes. Details on tomorrow’s official unveiling can be found here. (Animal costumes encouraged).

(Does the tail light blink red?)

Wow. I’m actually proud to live in this town at this moment. *Not Sarcasm*

Nice work of “art”
I have to ask: What’s the deal with the “pyle” Why stack bikes in a heap? I’ve never understood this.

…the way this city makes me feel at home…I could sing!

This is so …monumental! hahaha!
I can’t wait to see it in person tomorrow.
Can’t believe that fateful night seven years ago would lead to this! yaya!

Wow way to spoil the surprise

People are going to want to climb that pole and touch the gold minibike with their hand. Is this Portland’s counterpart to Ireland’s Blarney Stone? Seriously, the thing looks fine…graceful. I’ll be interested to see the different forms created when masses of bikes are mounted to it.

I guess they should have put a little red hood over it before the unveiling?

And perhaps there is a little surprise too – a mini MAX train underneath?

That is the coolest thing I have seen in a long time.

Wow, can’t wait to see it. It will be on the list of places to take out of towners. This is Portland!

That makes my heart sing

Well Done Guys! It looks great! Personally i am not a fan of gold, but that “cherry on top” looks amazing.

The gold mini-bike at the top = brilliant!

People, we live in a city that builds monuments to Zoobomb.

We live in a city the birthed Zoobomb.

I am lost for words!

Congratulations on being able to get $10,000 on that art project with this economy!

Is going to look great with bikes on it

Much better than I expected. I actually like it.

Anyone know the over/under on how long before someone climbs up and breaks the gold bike off?

Totally awesome. I wanna touch it …

Soon as rent’s due.

there were plans to sheath the pretty gold cherry-on-top, but a scant week before the unveiling, we found out that the gold leaf needed a month or two to cure, so the sheath would’ve needed to’ve been put in place without touching the cherry at all. Our design options for the sheath at that point would’ve taken too long to enact. Boo!

Still, this sculpture is so exciting, and the fact that it isn’t sheathed shouldn’t keep you from attending the opening ceremonies today:

That is very cool. Quite beautiful, too!

I like the statue but would’ve appreciated a diy effort without taxpayer money. That truly would’ve been zoobomb.

Quite accidentally drove by it last night – it is an awesome site to behold, and it makes me proud to be a portlander.

…and get a sneak peek at the sweet helmets Nutcase donated to us. They’ll be housed in “the chamber” and lent to our guests. Thanks Nutcase!

About time. Grats bombers and it looks really nice.

stoked to see everyone keepin’ it positive

I think Portland’s strong bicycling culture and reputation are great. I think the creativity within the culture is great too.

That said, the whole zoo bomb thing is pretty dumb in my opinion. No disrespect to those who get off on it, but I just think getting lit and antagonizing TriMet and a bunch of the neighbors as a means of enjoying yourself is pretty childish and stupid. I guess I’m the buzzkill, but irritating others – even indirectly – is not my idea of a good time. Sorry.

Probably not a big surprise that I think the sculpture is pretty dumb too. Zoo bomb will probably go the way of the dinosaur in due course. We’ll be wondering what this sculpture was for. It’s not like it’s such a compelling piece that it contributes all by itself. I’d rather the $10,000 go elsewhere. How about that proposed bike boulevard on Going? Or, if art’s the thing, I dig those cool artsy bike parking racks around town.

And just for the record, I’m not a Republican, I like wacky Portland, I think Last Thursday is a much cooler event than say… First Thursday, etc. I’m basically your garden-variety liberal Portlander.

But this thing… really? Not hating, but I’m just saying the whole zoo bomb thing isn’t that cool to me. I’m clearly in the minority here, and that’s fine.

If people want to educate me on how zoo bomb positively contributes to a sustained effort to make Portland more bike-friendly I welcome it. I don’t get it.

Dissent, have you ever zoobombed? If not you won’t get it.

But i’ll try anyway . . . Zoobombers are some the most respectful, self-responsible partiers in this town. Zoobombing is super fun, especially on a mini. It’s about having a good time, riding fast, gettin a little crazy. It’s about community, and the Zoobomb community is ROCKSOLID. It’s a tight club and it’s open to new members, even you.

We don’t antagonize TriMet or their riders. Most of the engineers and passangers dig us.

“Zoo bomb will probably go the way of the dinosaur in due course.” My friend you are dinosaur-dead wrong here. What part of EVERY Sunday for seven years without fail do you not understand?

i challange you to educate yourself. Come on out some sunday eve this summer. If it’s not for you, fine. But don’t dis what you do not know.

Nope, I haven’t done it so thanks for asking. Agreed that the most informed perspective comes from personal experience.

There have been clashes with neighbors and TriMet so that needs to be acknowledged. It may be a “one bad apple” situation, as is usually the case in these situations. But those incidents are out there.

Seven years running is indeed a long time. Not exactly statue worthy from my view, but cool.

I’d rather see a statue in commemoration of the regular everyday folks who were killed by cars. To me those folks are martyrs at some level. Not to be antagonistic against those who drive cars, but going about your daily business on bike is honorable. How about a ghost bike statue? Now that would bring tears to my eyes.

I think that, shall I say…the beauty… of the choice to make the “..cherry..” atop the pole a mini-bike, is that even if the zbomb ever goes by the wayside, kids, upon seeing the cherry will continue to be inspired by it to want to bike. That’s transferable energy. Kids will look up there and immediately recognize that it’s almost exactly like their own bike at home.

“I’d rather see a statue in commemoration of the regular everyday folks who were killed by cars. To me those folks are martyrs”

i agree 100% . . .
and am working on deadlined project of this exact nature. Would you like to help?

i need images of Matthew Shekel, Michael Tibbins, Kerin Holtz and any one else killed before them on their bike all the way up to Damien’s dad. It’s not limited to Portland accidents, those are just the one’s i know about.

i’ll take help from anyone out there with this image collection process. Please send to biketemple@gmail.com
include dates and any other helpful info.

Dissent,
zoobomb is also about bikes and their liberating power, i forgot to mention that but i am sure you got that part of it.
See you on the hill or in email-land.

If you want money to go to a specific cause, work for it. Your monument idea sounds great. Seems like Kernal Loosie can connect you with that cause.

It bums me out, though, for a pro-bike group to get some money and then someone immediately comes out and says, “The money should have gone to pro-bike Project X,” as if money only gets awarded to pro-bike stuff once a century and “we really screwed it up by celebrating pro-bike Project Y instead of pro-bike Project X.” Sure, everyone has their idea of the best way to spend tax dollars. But can’t we all celebrate the fact that money has been put toward pro-bike public art, regardless of how specifically it reflects your personal biking lifestyle?

Who did the beautiful gilding work? Maybe I missed the credit, but if not could someone please provide it?

The gilding was done by myself,my daughter Montana Maurice, Elin and Nancy Thorn at Gold Leaf Restoration in SE Portland.Some pictures of the leafing here:
http://www.odoka.org/the_work/zoobomb_pyle/
Nancy owns Gold Leaf Restoration and is an avid cyclist, commuting from Vancouver to SE Portland daily. When I called her for leafing advice she enthusiastically gave me the low down, and then generously offered for me to bring the bike in do the leafing there with her assistant Elin and herself.
I can not say enough good things about the woman. Need something leafed…go there!