The Ginger Ninjas playing an
impromptu gig in a plaza in
Guadalajara while locals pedal
to generate electricity.
(Photo: Ginger Ninjas)

A bike-powered band that roams the globe on fully-loaded Xtracycles to bring the good word of a sustainable lifestyle to everyone that cares to listen. If that’s not the type of band many Portlanders can get behind, I don’t know what is.

The Ginger Ninjas — a band headed up by Xtracycle co-founder Kipchoge Spencer — will be riding through Portland this weekend and they’re looking for places to put on their “pedal-powered rock show”. 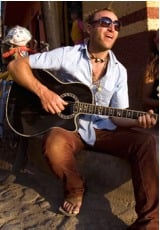 In case you haven’t noticed, Xtracycles (short for bikes that have an Xtracycle kit attached, which elongates the wheelbase and makes any bike into a “longtail” cargo carrying machine) have nearly become the Portland cargo-bike standard. Local shops can barely keep them in stock and it seems every week another family at my daughter’s school has dumped the mini-van for one.

The Ginger Ninjas take Xtracycles to the extreme. Last year they loaded up for a 5,000 mile journey from Northern California to Mexico City — nearly 100% human powered and with all their music gear in tow. During their shows, they have audience members pedal their bikes to generate electricity for their amps and mics. 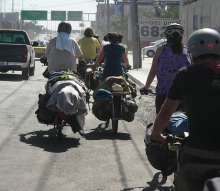 This is how the Ginger Ninjas roll.

This is a great band (I had the pleasure of hearing a pared down version of it live last year and it was very inspiring) and they’re hoping Portland will make them feel welcome. This Portland swing is due to a last-minute schedule change so they’re looking for contacts and hook-ups for volunteers and places to play. They can set-up their show anywhere, so things like parks and farmer’s markets are ideal.

If you can help connect the band to venues and/or want to help promote local shows, drop a line to Cara at gingerninjas@gmail.com. The band will be in Portland from Friday (5/22) to Sunday (5/24).

Stay tuned to the BikePorltand Twitter feed and/or Page Two for show times and locations.

To get inspired by their bikes and their music, check out this great, four-minute video from the Ginger Ninjas’ 5,000 mile bike tour to Mexico:

I wish I could help. I want to see this. I will bring a video camera. I beg that you post an update on the front page so I don’t miss this!

Too bad this didn’t coincide with one of the Sunday Parkways dates. I’m very excited to see them, looks fantastic.

Bicycle Music Festival to hit all the Sunday Parkways would totally ROCK!

LuckyLab – how ’bout the upstairs stage in Multnomah Village shop?

Great idea. Would’ve been even better with more than a couple days’ notice on the band’s part.

If you share some route details, I bet you could get a posse of Xtracycles, other cargo bikes, and other bikes to roll along with.

I’m just looking for an excuse to run my green Down Low Glow and test out the freshly upgraded coffee delivery system.

i think they should come on the north freak ride!

this friday night at 10pm at irving park, ne 7th and Freemont

thanks for shout jonathan, and thanks for the ideas all. pleasolution!

in the end, we sided with beth, better to do portland a little justice with more notice.

YES!!! to bicycle music festival portland! we just helped put one on in Chico last weekend and several of us agreed that it was one of the best days of our lives, no hyperbole. hard to describe how magic of a synthesis of the coolest elements of the emergent bike culture that the bmf can be.

I haven’t heard of the Sunday parkways. I’ll check it.

Anyone interested in helping to organize a portland BMF for later in the summer or Fall?