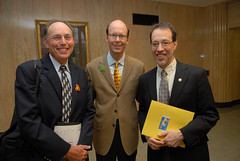 Billing it as a “A new kind of town hall,” two Oregon State Legislators will lead a bike ride around their districts next month.

Representative Michael Dembrow and Senator Jackie Dingfelder — both of whom represent districts in Northeast Portland — will join their constituents for a bike tour around the Cully neighborhood on May 9th. The six-mile ride will make a stop at the Rigler School Community Garden for a brief work party and organizers are considering a stop at the site of the upcoming cycletrack (slated to go in on Cully Blvd between Killingsworth and Prescott).

For residents without access to a bicycle, Portland-based Pedal Bike Tours will provide one. 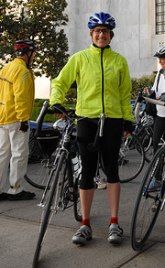 Sen. Dingfelder at the legislator
bike ride on Wednesday.

Alex Berke, a legislative aid to Rep. Dembrow, said both legislators are bike advocates. Dingfelder is a BTA Alica Award winner and former employee of the Bike Gallery. Dembrow was a co-sponsor of the Idaho Stop Law and he regularly rides around Portland with his family. “They miss bike commuting,” said Berke, “and this is a fun way for them to be out and about in their districts.”

Berke told us that Rep. Dembrow is always looking for new ways to engage with constituents. According to Berke, they felt doing a bike ride would be a great way to get people involved with state government who wouldn’t normally think of attending a regular town hall meeting.

Anyone interested in joining the ride should RSVP to Rep. Dembrow’s office via email to rep.michaeldembrow@state.or.us or by calling (503) 986-1445.

Rep. Dembrow, Sen. Dingfelder and You
A Bike Ride in Cully Neighborhood
Saturday, May 9th, 9:30am
Wilshire Park (NE 33rd and Skidmore)

This is awesome! What a wonderful way for state legislators to encourage their constituents to go green!

Brilliant! Great way to be out in the community and supporting legislation on sustainability with one’s actions.

Love it! If they want to make another stop at my garden for a brief work party, I’ll make them fresh lemonade.

Hopefully Jackie D. will slow it down for the regular bikers- I have seen that woman going up Rocky Butte like other people go down it!

Great to see your (I live in WA) doing this! Speaking of cycling legislators, how is Jason Atkinson doing?

This is great. I just emailed my reps (Sen. Richard Devlin and Rep. Chris Garrett) letting them know I would love to go on a ride with them. Cool stuff, thanks for sharing.

I just RSVP’ed. What a great way to connect with your constituents.

Sounds great! And for their next two-wheeled meeting I say they lead the district in a ride to Salem.

I love the Reps as much as the next semi-Portlander… but I’m so out of shape I’m scared I’ll have to follow behind in a cab! Do post an advised workout.