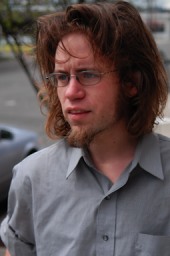 The City of Portland is currently in the process of updating their “private for hire transportation” policies. As part of this update, and partially at the request of local pedicab operators, they will also be regulating pedicabs for the first time.

The growth of pedicabs has skyrocketed in Portland in recent years in large part due to new businesses like PDX Pedicabs and Portland Cascadia Pedicabs.

Ryan Hashagen, owner of Portland Cascadia Pedicabs, is all for new regulations. He wants pedicabs to be treated as legitimate businesses and he wants customers to know they’ll be assured a safe ride. Hashagen knows all to well about the importance of safety. In August of 2008 one of his Seattle-based pedicabs was involved in a crash that left a 60-year old man dead.

However, Hashagen is very concerned that the city’s proposed regulations will effectively kill his business (and that of other pedicab operators). Hashagen contends that they were written by “auto-centric interests” and that they are based more on an interest in generating revenue (through licensing fees) than by safety concerns. Hashagen has been making the rounds to the local media and he has become an outspoken critic of the way the city has handled the issue thus far.

He stopped by our office today and I asked him to share more about his concerns. Watch the video interview below.


We’ll have more on this story as it develops.

In the current situation, pedicab regulation is good thing™. The Private For-Hire Transportation Board of Review is the best group suited towards working with the Pedicab companies and the 100 drivers. They’re focus is (and has always been) on licensing, safety, and consistent rates.

The Private For-Hire Transportation Board of Review simply wants them to have commercial insurance and a business license. Hashagen is trying to turn this into a revenue issue, when it’s not – every Portland business pays at least $100/year for their business license. Why are pedicabs different?

If the pedicab drivers promise to cut back on the bean burritos, does that count?
I hope Portland’s government can walk the walk and find a way to realistically integrate this alternate mode of public transportation.
I can’t stop thinking of a Geico commercial. Sorry.

David (#2) – That’s not true at all. Every business is required to either apply for a business license or for an exemption. If your business grosses less than $50,000 per year, you are exempt from the requirement to have a business license.

Pedicab business owners with 1-3 pedicabs could easily fall under that threshold, and pay no business license fees at all.

Even the big operators like PDX Pedicab and Portland Cascadia Pedicabs gross less than the $50,000 a year exemption requirement. These businesses are break even and provide a social service to the community while creating small scale industry and jobs. They also slow down traffic in a really cute way!

Pedicabs are essential non polluting transportation for millions in Asia. They are cheap and accessible for almost anyone. Pedicabs ought to be subsidized, not taxed! This policy is bass-akwards.

David, the pedicab operators are currently subject to the Portland City Business License Fee, Multnomah County taxes, Oregon taxes and federal taxes, to the extent they are otherwise required to file in each jurisdiction. Further regulation has no bearing on that fact.

Ryan (#5) – “break even” refers to net revenue. Gross revenue is the total amount taken in before expenses.

I don’t know the particulars of the business, but if you pay a pedicab operator $12k per year (which is below the poverty level), then you have gross revenues of over $50,000 a year or else you won’t stay in business very long.

Schrauf (#7) – yep, plus also employment taxes, Tri-Met Transit District tax, and worker’s compensation insurance, among other costs. Being an employer sucks in many ways.

Regulation of the industry is good, so long as it doesn’t put a burden on it so high as to put them out of business.

Michael (#6) – I agree, but I suspect that the local taxi companies would not.

Making each pedicab operator tote a 20lbs fire extinguisher around seems perfectly reasonable. It will come in handy when his bicycle malfunctions and bursts into flames! And let’s talk about seatbelt use and airbags….

“Hashagen contends that they were written by ‘auto-centric interests.'”

#10, Donna, ditto. Maybe the bikey interests should make campaign contributions and partake in some other benign, legally allowable BRIBERY too? Naaaaaaaaaaaaaaaah.

Illegal bribery works EVERYTIME! If no one gits caught, it’s not illegal, right? 😛

A friend worked as a pedi-cab operator so I just wanted to clarify how the business works (at least, the one for which he worked, I believe they all work similarly). The drivers pay a nightly fee to use the pedi-cab, and keeps whatever fares and tips he receives above that amount. Depending on the organization, there might be a cut of the fares over and above the rental fee. None of the drivers are paid a living wage at all, but are considered independent contractors; and business is conducted in cash so I’d be willing to wager the income is under-reported all around.

A $40,000-a-year gross revenue would be a liberal estimate, under this business model.

Does anyone else think Ryan Hashagen looks like Conrad from The Bicyclist’s Show?

I drive a motorized cab. I just want to make it clear that this is not necessarily a big push from cab companies — the city is proposing our permit fee to increase from $65/year to $240 every two years, so we definitely have something to lose, too. And while I certainly don’t agree that a pedicab needs “pollution control devices” and fire extinguishers, I do think a yearly permit fee is fair. Should it be as much as I pay? Probably not. But if I had it my way I guess I’d rather pay a high permit fee in lieu of all the other taxes I get nailed with each year because I’m self-employed.
I’ll keep my fingers crossed the city council has enough sense to realize some of the mandates are outlandish, but I do find it awesome that ya’ll might get some standard rates set for fares…if that’s what you want, that is.
Keep up the good work, and see you on the streets.

And one more thing: I don’t know how the meeting is set up, but if I were a pedicabber I would ask to be first up or have a separate meeting. There is more than likely going to be a huge showdown between cab vs. town car drivers…An overheated, long-winded, drawn-out showdown from veteran drivers that may overshadow other contingents such as yourself. Just sayin.

As one of the original crew starting pedicabs in NYC in the early 90’s, I’d like to chime in.

I can’t speak to most pedicab operations today, but back then our drivers were all independent contractors. We modeled our business after existing taxicabs, so it would be familiar to City officials. We had a very successful meeting with city officials who supported the idea of pedicabs; and they basically told us there’s nothing stopping us, but please do a good job [of self-regulation].
A strong undercurrent of our operational policies was to avoid irritating the taxicab cartel in NYC. We decided to service the lower Manhattan area only, as far as cruising for fares; but going broader for special events. We didn’t want to be perceived as a threat to the powerful taxi + limousine lobby.

Safety is certainly the big concern, and it can be difficult to manage driver behavior. From what I’ve seen downtown on weekend evenings, I’d have to agree that some degree of regulation and/or enforcement is in order.
But let’s recognize that pedicabs are not inherently unsafe – any more than one should claim that a bicycle is unsafe. One obvious improvement would be more stringent lighting requirements.

While my finger is less on the pulse these days regarding pedicab operations, it would seem that only a small change is needed. Basic insurance is in place, and I assume driver’s licenses are required. So tightening up bad behavior should simply mean more oversight by pedicab companies, and more enforcement of traffic violations.

Driving a pedicab really is a HUGE responsibility. Carrying people is a much higher responsibility than toting cargo, but reflects many of the same needs and circumstances. And we certainly want to move cargo around the city a lot more sustainably than we do today – with the exception of B-line.

In the final analysis, pedicab operations MUST CONTINUE as a super-obvious alternative to automotive transport in dense urban areas. Does the City of Portland truly want to move in a more sustainable direction? The City Council’s response to this issue will be telling.

I’ll be there [council hearing] on May 6 to support continued operations of the greenest transportation in existence.

Why can’t they regulate themselves? Have all the pedicab companies meet and come up with regulation and call each other out if they don’t follow through.

Then, too, this whole thing could be run the way that rickshaw operators do it in developing countries in Asia. Most don’t own their vehicles, pay exhorbitant fees to rent the rickshaws from the owners (who own dozens to hundreds), and in addition they rent sleeping quarters from the rickshaw owners because their wages as rickshaw drivers are barrely enough to pay for food and clothing, let alone rent on an apartment of their own.

For an enlightening look at human-powered taxis in developing countries, I suggest the excellent book, “Chasing Rickshaws”.

Public discussion is great. We want regulation, just include the pedicabs and drivers at the table