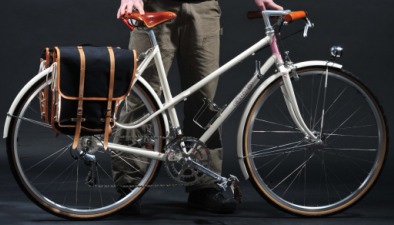 This year at the North American Handmade Bicycle Show (NAHBS) city bikes were all the rage, and, after a panel of jurors looked over all of them, they decided the best one came from Portland. 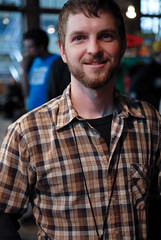 Local bike builder Mitch Pryor of MAP Bicycles maintained Portland’s winning streak in the category by taking home the “Best City Bike” trophy. Fittingly, for America’s most bike-friendly big city, a Portland builder has taken home this award every year it has been offered (in 2007 and 2008 it went to a bike made by Joseph Ahearne).

Pryor — who honed his rack making skills with Ahearne before launching his own company — made his debut at the Oregon Manifest show back in October. Pryor’s award-winning city bike was made for a customer in Colorado and it was partly inspired by the bicycle drawings of French artist Daniel Rebour. 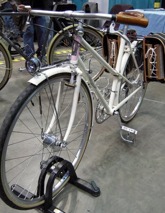 Pryor was one of seven Portland-based builders that made the trek to Indianapolis to exhibit at NAHBS this year. To cut down on costs, they shipped all their bikes and booths in the same truck. The truck was donated by local bike industry supporter Christophe Esayian who works at shipping and logistics company Expeditors International.

According to NAHBS spokesman Paul Skilbeck, total attendance for the three-day show was just under 6,500 people. That’s about 300 shy of the record for attendance set last year in Portland.

Mitch is a top notch builder with an classic sense of style. Congratulations, Mitch!

Congratulations Mitch! That is a beautiful rig.

BikePortland,
You’ve got to put up more pictures of the bikes you saw! So excited to see everyone’s new work. Bring NAHBS back to PDX!

Congratulations Mitch! This is a well-deserved award, and we all look forward to more beautiful bikes from MAP.

Way to go Mitch!!! Keep rocking with MAP bikes. I’ll have to come talk to you as soon as I finish college and make some money! 🙂

“You’ve got to put up more pictures of the bikes you saw! “

I wish I could! unfortunately I wasn’t able to there this year. just google NAHBS 2009 and you’ll find a ton of photos.

That bike is a beauty. The honor of “Best City Bike” should be taken in very high regard considering the many purposes the bikes serve. Way to go Mitch!

Maybe one day a trike will win best … oh wait, Sacha already did that. ;0)

Congratulations on your award. I can’t wait to see how “aesthetically pleasing” this years trophy is. 😉

Folks – Mitch fabricates jaw dropping bikes – You owe it to yourself to check them out in the flesh – and buy one too.

Thanks to everyone for the support. I really was surprised and honored to receive the award for the best city bike. It took a while to get city bikes recognized at NAHBS, and now the city bicycle is emerging stronger than ever. I am confident this trend will continue as evidenced by the sheer number of dedicated mid-west cyclists that made their way to this years show.

Hmmm… When they hold the show in Portland, more people come. Maybe they should hold it here more often?

(And that is a beautiful bike.)

Nicely done Mitch! All of your bikes looked great, and it was awesome that you got the prize. This years judging was a better solution to the voting issues, instead of leaving it to the builders (most of us can’t possibly see everything during the show) it was decided by a panel of dedicated judges that made a point to look at everything. That makes the award all the more impressive and Mitch should be very proud!

man, between Ahearne and Pryor they def crank a lot of bike love out of their tight shop. congrats mitch!

is it just me or all male portland bike builders svelte, bearded, humble and handsome?

A hard earned award for all that quiet, humble slaving away. Mitch deserves every ounce of recognition for his beautiful work.

Get your orders in now before another Portland builder gets a waiting list that goes for years!