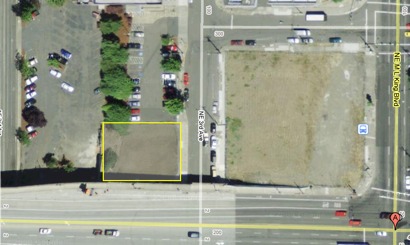 The PDC and the Parks Bureau are working with a group of citizens on a possible pump track at this location.

This morning I was able to learn more information about an idea to create a bicycle “pump track”* just north of the east end of the Burnside Bridge.

Lam says the land won’t be redeveloped for “a couple of years” so they’re looking for other ways to use the space. The PDC wants the site to be used by the community in the interim period. They have already inked plans to allow the Burnside Skatepark (which is under the bridge) to expand into an adjacent parking lot and Lam confirmed that they are involved in talks with citizens and the Portland Parks Bureau to possibly use a small parcel as a bicycle pump track.

The group that has been working with Parks to find a site for BMX-style bike riding is the same group that we reported on back in November. That group is headed up by David Reese and Will Heiberg. Reese and Heiberg are Portland dads who just want an off-street place for their kids to ride.

Lam says once she heard about the group she thought the small parcel (in graphic above) just might be a good fit. She told me she likes the idea of doing “something fun for little kids so parents can take them there.”

Construction on the Burnside-Couch couplet project is slated to being this summer, and Lam has some concerns about safety in the area with large trucks and equipment present. But at this point she says, “We’re in the infancy of the discusssion”.

Heiberg and Reese are happy to be at the table and are hopeful the plan moves forward. Heiberg told me on the phone this morning that he wants to install a beginner and intermediate pump track with rollers and berms. “It would be great for kids,” he explained, “but it will have appeal to a much broader audience.”

Watch this short video for an example of what we might see in Portland:

Thank you for defining a pump track. I had no idea what it was before reading this. Looks like fun!

The polo haus house of the axles of evil has just completed its micro pump track in there back yard alot of fun polohaus.blogspot.com photos of it there.

I’ve ridden pump tracks before, they are lots of fun and an unbelievable workout. 3-4 laps and you are really feeling it. Great for building bicycle skills and confidence.

and here I thought ‘pump’ had something to do with a mountain bike group! silly me…

stay out of the skatepark!

I will ride my bike in the skate park any damn time I wish. Did it last night! Will do it again!

Count One Ghost Industries in to help if we can. Portland needs to be more MTB friendly for sure