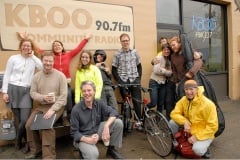 Here’s how Ayleen Crotty, the show’s co-founder, explained the decision:

KBOO is undergoing some much-needed restructuring to revitalize their programming…

Unfortunately the staff has made a decision to cut the KBOO Bike Show to a half hour program.

This change would eliminate our ability to take calls from listeners and foster a vibrant community dialog. We will not be able to dig deeply into heated issues like the “Idaho Stop” [Editor: Listen to the most recent show, on this very issue, here].

Crotty requests that the show’s listeners take immediate action: “Today is the day to get the word to KBOO, as they’re making their decisions now. ”

Crotty and Sara Stout started the KBOO Bike Show several years ago as a way to reach out to inform, converse, and entertain on all things bike-related with the general public, biking and non. A couple of years ago the team expanded to include Carl Larson and Tori Bortman.

When the show first began it was a half-hour program, but in a few short months it was popular enough to gain an hour-long time slot. The show runs on the first Wednesday of every month from 9am to 10am.

Crotty won an Alice Award from the BTA in 2005 in part for her role in creating the show.

Crotty makes the case that the show has made a difference:

Over the years, we have had powerful conversations with drivers confused about how to interact with cyclists, friends grieving over the loss of loved ones as a result of run-ins with cars, jubilant cyclists creating amazing projects, riders from Amsterdam, Chicago, Bolivia, Prague…

Honestly, to hear the voices of those listeners who call in, I know we’ve made a difference out there on the road. We’ve helped make the roads safer, we’ve educated and we’ve helped some drivers feel more at ease as they navigate among cyclists. This important conversation simply does not and cannot happen while we’re on the road.

You can also listen to archived editions of the KBOO Bike Show thanks to Chris Smith at PortlandTransport.com. Bike Show highlights from over the years are available at the show’s website.

UPDATE: KBOO has told the Bike Show team that because of the volume of calls and emails they received in support of the show, they will be keeping it in its hour-long time slot on Wednesday morning. The team says thanks to everyone who showed their support!

UPDATE 2/22: We made some factual errors in our story. According to KBOO, keeping the show at a full one-hour had nothing to do with the “volume of calls and emails they received” as we reported above. The KBOO programming staff was working to accommodate the requests of the Bike Show hosts and BikePortland caught the story while those negotiations were taking place.

That’s terrible! If anything, this show needs to be expanded to a weekly format. Which I pestered Carl about at the anniversary show, but apparently it’s a huge amount of work just to make a monthly show.

The call-in part is valuable in that it’s the one place in the local media I can think of where a civil dialog happens between drivers and cyclists. Sometimes drivers call to complain about cyclists, but end up getting a friendly and informed response from the hosts and guests.

In imagining a weekly show, the first thing I would think to expand would be the call-in part.

The Bike Show and Democracy Now are the two shows I seek out on KBOO. I’ll definitely drop a line to the station.

I donate my money to KBOO and they cut the length of my favorite program in half? I usually take the time listening to the show to give my bike its monthly cleaning. Now I guess I’ll have to clean twice as quickly. :-/

“I usually take the time listening to the show to give my bike its monthly cleaning.”

Brilliant lifehack!! I might give that a try myself…

Why couldn’t they use a live podcast type forum to additional programing as they had time?

Thank you so much to everyone who has shown their support for our program! It has been very heartwarming to hear from all of you.

On the KBOO end if things, it is a very complex re-structuring process, so I can’t easily answer questions about how this came to be, but it definitely was a blow to the collective.

The GOOD NEWS is that thanks to all of your sending in your messages to KBOO, they are looking into allowing us to keep our one hour program. At points, the AM News Director said she was getting an e-mail ever two minutes from show fans! that is very impressive.

If you’ve never heard our show, please tune in at any time to our online archives.

Let’s see, cycling is on the rise, and so they cut the show in half. Nothing like making yourself less relevant.

What will they do with the freed up 1/2 hour? Let me guess, more Grateful Dead.

I wrote my email as soon as I saw the alert from you, Ayleen. Thanks for the heads up. I hope we make a difference and keep that hour, it’s a valuable part of the community.

Two nerds are riding along on a tandem listening to kboo radio show , when suddenly, the one on the front slams on the brakes, gets off and starts letting air out of the tires.

The one on the back says: “HEY! What are you doing that for!?”

The first nerd says, “My seat was too high and was hurting my butt. I wanted to lower it a bit.”

So the one in the back has had enought. He jumps off, loosens his own seat and spins it round to face the other direction.

Now it’s the first guy’s turn to wonder what’s going on. “What are you doing?” he asks his friend.

“Look mate,” says the rider in the back, “if you’re going to do stupid stuff like that, I’m going home!!”

Why not just podcast the show? Maybe bikeportland.org could host it? I think you would probably get even more listeners. Unfortunately, KBOO’s future is a mess.

Making radio isn’t as simple as just making a podcast. KBOO is an invaluable resource. They provide quality equipment to do off-air interviews, editing equipments, studios for us to do fun things like live bands, training, support, an engineer, phone lines, long distance calls, promotion and so much more.

For our January show with Blind Pilot, two volunteers arrived at the station at 7:30 in the morning to figure out the complicated logistics of multiple mics, two studios, a room full of guests, call from listeners and much more.

And there is something to be said for real radio…

There is an inherent quality of radio shows that adds value to our Consciousness, google the programers and let them know how you feal about the changes they have in mind. Sometimes small actions can make a big difference

Ooh. This sucks. I rarely catch the show live but always listen to the podcast. Time make my voice heard as a KBOO member.
WHo do we talk to if we call the number above?

The updated headline says it’ll stay at 1 hour. This article has been good for me because I didn’t know about this program in the first place. I suspect I’m not alone. So this inadvertent advertising will probably cause a spike in listeners. Ideal.

I never heard of it either

I have never heard of the show, but I will tune in for sure to see what it is all about. Thanks for the the article that made me aware of it!
THANKS!

Power to the (email) people! The full show is back!

Does BikePortland do a regular, “Tomorrow on the KBOO Bike Show” feature? I know I’ve seen a few, but is it every month? Seems like that would be a handy way to let Portland’s bike-riding audience know when to tune in. Because if I have one problem with KBOO, it’s not knowing when to tune in to catch the specific shows I want to hear. I think there is a KBOO calender online, but honestly, if events aren’t popping up in an email notification for me, or somewhere – like BikePortland, or my online calendar – that I’m checking frequently, they’re lost to me.

If there isn’t already a regular “tomorrow on the Bike Show” feature, and you guys feel too overburdened to start one, I’d be happy to help if I can.

I just made a donation to KBOO to demonstrate support for the Bike Show… and to thank the management for deciding to keep it an hour long.

You can earmark donations to the Bike Show.

Bike Show Rocks!
Hooray to KBOO for keeping it a full hour!