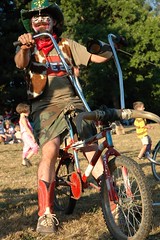 Dingo the Clown on one
of his many fantastical bikes.
(Photo © J. Maus)

He was the ring-leader of the now defunct Alberta Street Clownhouse. I, and many others, spent many Last Thursdays hanging out at the Clownhouse and watching and participating in all the crazy, zany gags and events they used to do (most of them involving fire and tall bikes).

Since the rent was raised on the house, Dingo and all the others have moved on.

These days, Dingo is doing great. He’s working harder than ever at various open mic nights in pubs and cafes throughout Portland and his performances are packing them in. 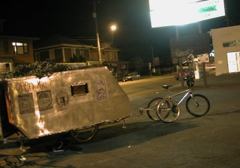 On his frequently updated (and often quite personal) blog, Dingo shared a bit about his current residence (which was built by none other than mobile-home bike legend Brian Campbell):

“…it’s dry and warm, more than you may think. It has internet, sound system and other good stuff. I’m looking for a yard to pay rent and live in for a few months, I want to build a livingroom to dock my house to so i need a back yard to live in for January.”

Dingo is a true Portland original and I miss the Clownhouse.

I’ll have to check in on Dingo’s blog. Hope Caffeine and the kids are doing o.k. .