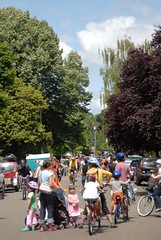 Details of Sunday Parkways 2009 are slowly leaking out of the Transportation Options division at PDOT.

Last year’s event — which opened up a six-mile loop of North Portland streets to people and prohibited cars — was a ground-breaking success. In 2009, PDOT says they’ll expand the event to three separate days in three different parts of the city.

According to Janis McDonald, one of the lead staffers on the project, the upcoming Sunday Parkways will consist of a North Portland route in June, a Northeast route in July and a Southeast route in August.

McDonald says her office was inundated emails and phone calls from all over the city after last year’s event; “People were saying, bring it to my neighhood!, so we wanted to spread the fun around.”

The event may also last longer in 2009. Under consideration is an idea to start the event an hour earlier later at 9:00 am and keep the streets carfree until 4:00 pm. 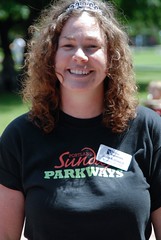 A longer event means PDOT will need even more volunteers. Voluneer organizer McDonald says they hope to recruit “400 happy people to help with each event.” She also added that the shifts will be shorter this year so volunteers can have more time to enjoy the event.

Routes that can handle the large crowds, that have safe arterial crossings and have minimal impact to TriMet service are expected to be finalized by January.

The City is busy contacting neighborhoods and business and community organizations about potential routes and collaborations. So far, Kaiser Permanente and Bike Gallery have pledged to support the event, however, McDonald says more sponsors will be necessary to make all three events a reality.

If you’re interested in becoming a sponsor or a volunteer of the event, contact Janis McDonald in the Office of Transportation at (503) 823-5358 or via email – janis[dot]mcdonald[at]pdxtrans.[dot]org. PDOT is also seeking vendor and performer ideas as well.

woo hoo!!! I missed last year’s event so I’m very much looking forward to it!!! Wouldn’t mind checking out all 3! 😀

Hmmm, I wonder how they will set up that SE route? I hope they bring it past my house on Lincoln (already a hopping bike boulevard), maybe down through Ladds, plus Clinton as another East/West section. It would be great to funnel folks into Mt. Tabor Park also!

If you bring it back to North Portland please consider actually closing N. Portland Blvd. to traffic. As a pedestrian it would have been nice to be able to walk along Portland Blvd and/or cross it without having to dodge traffic. As it was, the traffic on Portland Blvd was consistently held up as bicyclists were allowed to cross by Peninsula Park. So you had numerous cars idling for 5 to 10 minutes and spewing their exhaust just so bicyclists could cross. It seemed kind of counterproductive.

The first one was a blast. I’m going to volunteer this time around.

I wonder if the goals of Parkways are best served by putting people on existing bike boulevards, or letting them ride car-free where then might not be able to otherwise? A combination of both, I imagine: on the boulevards to bring awareness of their existence, but also on roads not usually considered bike-friendly, to create a seed of speculation on how we might make those roads friendlier. Maybe with an emphasis on the boulevards, to get riders familiar with those routes so they keep using them post-Parkways.

PDOT is coming to the Concordia Neighborhood Association Board Meeting on 12/9 to discuss the NE Portland route.

The CNA board meetings are open to the public. The CNA Board meets on the 2nd Tuesday of the month at 7 pm in the Community Room of McMenamin’s Kennedy School.

I would like to see a parkway that brings the park to the city, not the city to the park. I believe the original intent of the ciclovia was to take public space that was devoted entirely to motor vehicle traffic and devote it instead non-motor vehicle use. The roads are public space, for public use for a few Sundays of motor free fun.

I appreciate that the planners are being careful and polite, but I believe what is being created is more like a roving block party than a ciclovia. Hey, a roving block party is fun too, but I would like to see some emphasis on creating a consistent, central and enduring route for the parkway.

I would like to see the parkway connect across the river and across hwy 30. I think it’s fine to have special attractions in each neighborhood, but let’s look at closing Grand and Burnside, Foster and Powell, the Park blocks and NW 23rd instead of sticking to back streets and existing bike routes.

True, people will demand more, so plan for success not failure. Create a route that can be kept and expanded upon.

“Hey, a roving block party is fun too, but I would like to see some emphasis on creating a consistent, central and enduring route for the parkway.”

I agree with you Shoemaker. I am disappointed at the direction they’ve decided to take this. I think it’s a mistake to spread the route around as I think it will gain much more traction if it’s a repeat event at the same location.

Also, I think it’s time for PDOT to explore a bit more aggressive route. Residential streets are fine, but the spirit of the concept is like you say, closing major thoroughfares downtown. Until that happens, I will reserve full excitement for this event.

I think Gil Penalosa would be disappointed.

it went past my house last year and would like to see a repeat. I was blown away by the attendence. In the morning it looked like hardly anyone was going by, later in the day the whole street was just packed solid. Couldn’t ask for a better comunity building event

Please please please bring this concept to some of the neighborhoods outside of the inner core. The event last year was fantastic and folks who see and participate in it will likely have their minds changed about cycling in general.

This is great news. I rode to this event last year with some friends and a three four year olds. We had a great time.

I agree I’d rather see them downtown, as we ride the neighborhoods all the time. Downtown with the kids would be really fun.

Still, like I said, we had a great at the first one and will definitely volunteer/ go to the next ones.

where does the BP community think these should be done? seems as if we would be able to have some input on the route designations if we ask nicely…