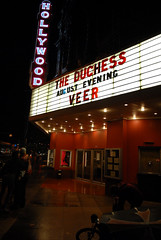 Veer on the marquee
for the very first time.
(Photos © J. Maus)

The producer and filmmakers behind Veer, a feature documentary about the Portland bike scene (I shared my thoughts about it back in September), held a special premier screening for cast and crew at Hollywood Theater on Thursday night.

Many of the personalities that star in the film were on hand, including Bicycle Transportation Alliance executive director Scott Bricker, former Sprockette Lauren Pedersen, advocate and non-profit organizer Steven Kung, and Gabe Graff, formerly of the Community Cycling Center and now on the Safe Routes to Schools staff at PDOT. 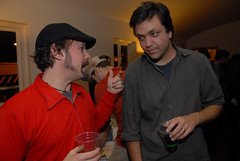 Also at the premier were many of Portland’s best freak bike builders and a host of Zoobombers (they’re featured extensively in the film), including graphic artist and Zoobomb regular Gabriel Amadeus Tiller. Veer follows Tiller’s exploits through the creation of the 2007 Pedalpalooza poster to his victory in the 2007 Zoobomb Century.

Following the film, there was a sort of giddy energy in the theater lobby. Scott Bricker beamed, clearly pleased that the film portrays his Salem lobbying efforts in a heroic light. Gabe Graff — whose trials and tribulations teaching kids’ bike safety at the Community Cycling Center are one of the main storylines — told me later that seeing himself on the big screen for the first time, “wasn’t nearly as embarrassing as I thought it would be.” 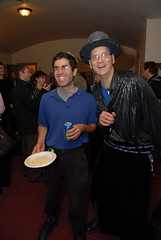 After sharing congratulations and opinions, the talked turned to an after-party.

As we enjoyed rounds of drinks and bad karaoke at Chopsticks (on Burnside), it sort of felt like Veer, the sequel.

The official premier of Veer will be November 21st at the Hollywood Theater. You can sign up on the Veer website to get tickets. Also, Greg Fredette, Jason Turner, Gabe Amadeus, Scott Bricker and myself will be guests on KINK FM (101.9 in Portland) on Wednesday morning at around 11:00 am.

Go forth and kick ass for the bicycle lord!

Veer is phenomenal – everyone who can should go out and see it!

what time is the Premier?