AOL’s Lemondrop (an “edgy women’s lifestyle site”) has put together a list of the The 51 Hottest Politicians in America.

#1 on the list is 32-year-old Oregon State representative Ben Cannon from Southeast Portland. I searched my archives and found this shot of him pedaling along the Marine Drive bike path in July 2007: 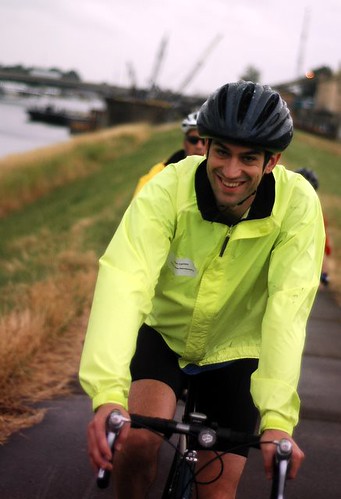 I rode with Ben a few years back at one of the Cycle Oregon policymakers rides. I was impressed that he was a State Representative at such a young age (he’s clearly got a bright future ahead of him), but I had no idea he was such a “hottie”.

Here’s how AOL’s Lemondrop describes him:

This guy teaches middle school and is an avid cyclist. He’s also got that grunge-cute look of a guy who plays in an indie rock band on the side. We like. A lot.

Congratulations Ben! Hopefully you can use this important endorsement in your current re-election campaign ;-).

Ha Ha, at 32 when you have not shaved for a couple of days it is rugged and sexy. At 52 you just look scruffy. Oh well time marches on ­¤Öü

Go Ben! He’s my rep. and has done a great job for us in outer S.E. And The world can always use more cycling middle school teachers ­¤śē
btw – Jonathan, you neglected to mention Ben’s up for re-election.
Vote!

thanks mmann.. my oversight.. i’ve edited the story and linked to his re-election site. cheers.

Damn. I thought it was going to be a woman so all the angry neo-feminists could come out of the woodwork.

Damn he is sexy.

What’s to say at 52 you look scruffy.

I am 55 and still look young and sexy.

Do I detect a hint of agism?

Dude’s got a great website and run-down on his position regarding the issues. One of the best amongst his priorities is his commitment to “…bridge the urban-rural divide by building relationships with non-Portland legislators, including members outside the Democratic Party.”.

There is way to much energy being wasted on competition rather than recognition of common interests and co-operative efforts made to serve them.

So, wait… Each state only gets one politician?

That’s lame, because Sam Adams is sooooo at the top of my list. And compared to some of the other winners on the Lemondrop site? Absurd! No contest…

My wife mostly. Actually I look better than than I did 20 years ago. (And yes, it was kind of a low bar.) Now, I really cannot do the silver-gray stubble thing without looking scary. Agism? Perhaps, although I find the touch of grey in my wife’s hair very attractive.

This is exactly what I want to hear a politician say.

“Priorities. I will work to repeal Measure 11. Our prisons budget rose 30% in the last biennium as a result of our policy of mandatory minimum sentences ¢ even for non-violent offenders. If we donÆt fund school now, we fund more prisons later.”

ridiculous that they have this, but…
he is hott!

Umm….you guys are nuts? I wen’t to ARbor, and he was my teacher for 3 years. He really is a sweet, kind, informed man and a brilliant, promising politician. But he is not attractive! Speaking as a girl who went through a crush about every three weeks in middleschool, he is not hot. If his status as the hottest politician in america brings him recognition for his grass-roots politics (he won’t take donations over $100 and not from any organizations, only individuals), commitment to direct interaction with the community he represents, and political oppinions, great. But who cares what he looks like? Oh, and all the sites don’t mention, he is 6 feet 6 inches tall, so you spend most of your time staring into his chest rather than his face. I’m glad to see that other post-ers are looking at his website and the issies he cares about. his site is votebencannon.com