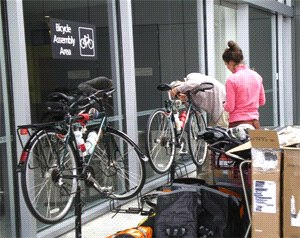 A bike assembly area — like this
one at the Christchurch Airport in New Zealand —
might be installed at PDX by this spring.
–More images below–
(Photos courtesy Jason Gately/PDX)

The Portland International Airport (PDX) hopes to become the first airport in the United States to offer bike assembly areas and other services for two-wheeled travelers.

Already in existence at airports in New Zealand and British Columbia, the idea is to set aside a dedicated facility where people could re-assemble their bicycles before they hit the road, or take them apart and pack them up prior to getting on a plane.

According to PDX aviation planner Jason Gately, who I confirmed the plans with this morning, the idea (which sprang from a brainstorming session at the Oregon Bike Summit back in April) is to have the facility on the lower level near the MAX light rail station and baggage claim area. Gately says it would be placed outside (under cover) and would include at least two bike clamps and an air pump (bolted to the ground).

“We want to promote bike tourism as much as possible…and PDX is a natural gateway for that.”
— Jason Gately, aviation planner at PDX

There will also be a new Travel Oregon kiosk to tout our regional bikeways and direct travelers to the assembly facilities.

Other ideas Gately hopes to incorporate into the plans are a bike tool loan program and a way to recycle and/or sell cardboard bike boxes and provide storage and access to hardshell cases.

Gately says this idea is a natural fit with PDX’s vision to, “promote bicycling in the region as an integral part of our culture,” and he adds that, “we want to promote bike tourism as much as possible…and PDX is a natural gateway for that.” 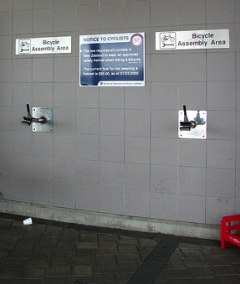 The bike assembly area at the Auckland Airport in New Zealand.

Gately has been working with Travel Oregon and Travel Portland, and recently met with Jerry Norquist of Cycle Oregon and Matt Picio of CycleWild (a non-profit focused on bike-touring) to get their input on the plans. 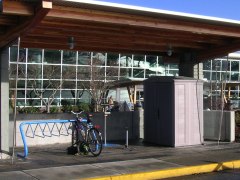 This bike assembly area at an
airport in Victoria BC includes a tool
shed and bike lockers.

The new bike assembly area is just a concept at this time, and there’s currently no funding set aside for it. Gately estimates it would only cost a “couple of thousand” dollars at the maximum.

He thinks there’s a good chance the Port will sign off on the plan: “It’s low-cost and high-benefit, and it fits in with a lot of other things we’re doing.” But, even if the Port doesn’t fund it themselves, “Maybe a local bike shop or other business would want to sponsor it,” says Gately, “or maybe we can find some grant money to make it happen”.

Gately hopes the new facility is installed and ready to go in 4-6 months, just as the spring biking season gets underway.

If you think this is a good idea, or if you’d use something like this yourself, Gately encourages feedback and emails of support to the Port of Portland management. Fill out their contact form with your comments here.

It’s very important to provide facilities to recycle a cardboard bike box, and to store a bike case at the airport. Otherwise, the idea won’t be very useful.

Some bike cases are pretty big. There are folks who travel with ‘non typical’ bikes – recumbants, tandems, etc.

This is a great idea. Bike tourism in this state is a huge win/win for everybody and we should be promoting it like crazy. How about all bikes fly free in and out of PDX? I can’t imagine the airlines going for something like this (nickel and dimeing B@#$%^&S!) but maybe our bike community/local shops/tour companies could put some pressure on the airport/airlines?

I’ll never forget flying into JFK from London, arriving in the wee hours, and unboxing the bike I’d just purchased in Denmark–parts all over the terminal floor. I was so proud of how I got everything together (it was more taken apart than most bikes usually are)…except the tires! Flat. My plan was to ride the bike from JFK into the city while the sun came up. So much for that. I stopped at the garages for the rental car companies, but even though they have pumps, they don’t have Presta adapters, of course. So, I dragged my flat-tired, heavy-laden new bike onto a series of trains, then walked it to the earliest-opening Manhattan bike shop I could find and sat in the rain for two hours waiting for it to open.

I now carry a Presta adapter on the valvestem, but the point is: it sure would’ve been nice to have a pump at the terminal and to put that thing together with real tools. Bravo PDX!

Time and time again I have been incredibly impressed with both the Port of Portland and Jason Gately in particular for their responsiveness and support for cycling. From the quick movement on the bike parking in 2006:

To the custom bike display, and now this.

Thank you to the Port and Jason for taking a great idea and working towards making it reality.

Hmm, when I’ve traveled I have just assembled and disassembled my bike in the airport lobby. At PDX, they’d make me go outside?

In addition to Richard’s excellent suggestion re: facilities to recycle bike boxes, they should have boxes for sale. A major source of annoyance on bike-powered journeys is either a) finding a place to store your bike box or b) buying a new one for the return.

Storing bags at the airport might be interesting. While backpacking in the UK, I used the storage facility at heathrow. The cost was a little high, but it involved sending the bags through xray security. I had a ton of aluminum climbing gear, so they had to rip the bags open anyway.

One more suggestion, is to put in one of those vending machines containing everything from intertubes, water bottles to power bars. Maybe this could be liscenced to a bike shop to stock it and make a profit. The liscence fee could go to pay for the entire set up. A shop like the bike gallery could call it their PDX shop and have directions (via the max) to one of its many stores.

How many people are checking their bikes as luggage considering it now costs between $100 and $150 each way?

It’s cheaper to ship via FedEx UPS to your hotel or destination address and assemble there.

Awesome!
Hopefully other US airports will follow the lead of PDX. Best airport for lots of reasons.

Not impressed. PDX Greyhound station has the space to put a bike together. Just watch for that stick-in-the-mud black dude sporting a pseudo-badge giving cyclists a hard time.

So, you just put your bike in a cab at the airport, pay them to take you to the Greyhound station and assemble it there? That’s a much better solution.

Interesting — I’d never thought of this; although I was pleased to notice a good number of bikes in the rack at PDX this morning.

Awesome! Maybe rather than a mounted floor pump, it could be a quarter-operated gas-station-style pump. (With presta adaptor, of course).

Pabstslut, why bother taking the cab from PDX. Simply arrive at the Greyhound station on Glisan from whatever originating city. Problem SOLVED.

Besides, better class of people on the buses, except for THAT brothaaa on a power trip.

This is pretty cool. I invested in a bike with S&S couplers, so I don’t need much space, but a stand would be kind of nice.
TSA types don’t like to see anyone “assebling” any types of anything near the airport, that is for sure. You probably will never see a set up like this at DFW…

A lot of people travel through our airport either starting or ending their TransAmerica cross country bicycle tour. The start and end points are Astoria, OR and Yorktown, VA. This is a great idea. Check out the route.

Canuck remarked:
“How many people are checking their bikes as luggage considering it now costs between $100 and $150 each way?

It’s cheaper to ship via FedEx UPS to your hotel or destination address and assemble there.”

Not to mention that FedEx & UPS have a much better track record of delivering you ride unscathed … and you don’t have to fight with cabbies to get your bike from the airport to the hotel (even if I assembled and rode it, carrying the bike box would be a pain).

When travelling w/ bike these days, I always ship it to the hotel or a local bike shop before getting on the plane.

The complexity in bike travel has always been what to do with the bike box. It needs to be stored (versus recycled) so it can be used again for the return trip. Bike boxes (both plastic and cardboard) are rather large so the space required and associated admin to manage the boxes adds up a bit.

I am very pleased for this incremental progress because it’s a great idea. I dream of one day being able to be served at the level of the motorist. If you think about the amount of infrastructure to support it, between the giant parking structures, parking shuttles, payment kiosks, waiting areas, etc. it’s really quite amazing. Consider if a tiny 1% of those expenses were applied to cycling infrastructure.

Canuck #11, Natty #20: It’s about as cheap to ship to a local bike shop and let them handle the assembly. That’s what I’ve been doing lately–no more looking for a suitable box, worrying about what to do with the box, damage from the baggage handlers, and other hassles. The shops have all the supplies needed for disassembly and assembly, and can do a better job of packing the bike than most amateur wrenches can.

Great plan, and a good step for our city…now if it didn’t cost $100+ to fly with a bike we’d be set. I like Another Doug’s idea…ship from and to a bike shop.

I’ve assembled my bike right by the baggage carousel. But I didn’t have a pump so I just took the assembled bike on the max with flat tires and all. The people at the baggage service will recycle. They just told me to leave the box in the hall and someone would take care of it….
This will be useful for the two other times I do this in my life.

yeah, this would be sweet, to again mention, if it wasn’t an extra $300 round trip to bring a bike!!! i even had mine disasembled, in a box, and they still hit me on the price. so, i’d say lets put our cash into other projects that people will actually use.