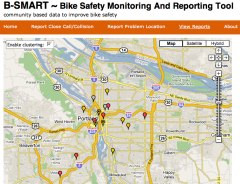 Screenshot — Try it out!

The new close calls map I offered a sneak peek of back in August has been launched.

We’ve even come up with a snazzy acronym…

This Google Maps-based tool allows you to report close calls, collisions, and problem locations. To input data, you’ll need to register with a valid email address (anyone can view reports).

Also, when you register you’ll be able to opt-in for notifications about bike-safety related topics in the neighborhood around your close call. For example, if PDOT is looking for feedback, or has scheduled an open house event in a certain neighborhood, you would be emailed with details on how to get involved.

B-SMART was developed by Joe Broach (a Ph.D. student in Urban Studies at Portland State University) in collaboration with BikePortland.org. It will take the place of my, Wanted: Your close calls post that has logged over 600 close call reports since it was published in August of 2005.

Spread the word, stay tuned for updates, and please leave feedback. Comments can be left here, or you can send an email to Joe Broach at joebroach [at] gmail [dot] com.

— Take a look at the “View Reports” screen (data populated with close calls reported on BikePortland.org).

Sounds like it’s going to be a really usefull tool!

I pray for the day when tools like this are not needed, but I’m glad to hear that this is out there for us.

Nice work, but 2 things should be considered. First, a vehicle driver option to report a close call. This is of course 2 sided. Second, perhaps a comment section similar to this. I know this opens up some pointless online quips, but I saw a report from a woman riding her bike with a child up SE 39th near Fred Meyer. This place is extremely dangerous, surrounded by decent bike friendly alternatives, and extremely NARROW! It would be a good forum for people to discuss options for these areas as well.

i’ll email Joe and see what we can do about getting this thing down to SF. 🙂

I second Andrew C. I reported a close call that I witnessed from the car (but wasn’t part of) and there weren’t really compatible options for that scenario.

Awesome tool though and I hope it helps the city to improve some of the problem areas in the city. Thanks Joe!

It’s a very nice tool, and I intend to consult it often. Good work and many thanks to all who made this happen.

I wouldn’t complain about it at all except that I hope the feedback will be useful. I reported a problem intersection where the problem in question occurs for both eastbound and westbound cyclists, but the tool only allows me to chose a single direction as the primary problem direction.

See the introduction post on the B-SMART home page regarding non-cyclist reports:

“What about non-cyclists’ experiences? While the experiences of motorists, pedestrians, and other non-cyclists are certainly valuable, their inclusion would make the data much more difficult to interpret. If there were enough interest, separate databases for other groups would be possible in the future.”

There are several issues with mixing cyclist/non-cyclist reports that Jonathan and I discussed at length:

2) Since motorists outnumber cyclists by probably 50 to 1 or more in Portland metro, motorist reports could quickly swamp cyclist reports and mask the issues most important to cyclists.

3) The concept of a “close call” or “problem location” is inherently subjective. There’s a good chance different user groups have different ideas of what those concepts mean. Mixing their ideas would make the data even harder to interpret.

It could be that separate databases could be added in the future, though. Thanks for the feedback.

Thanks Joe for the feedback,

Instead of adding a separate map for other modes of transport, possibly adding an ‘observer’ tab could cover that option? Then if victims/near-victims post their collision or close call they can be paired and collaborated on?

Should I use this to report problems in Vancouver as well?

Some problem locations can be pretty obvious, like the residential area of E.Burnside just east of 82nd Avenue where I narrowly missed being run over a couple of years ago by a motorist backing out of her driveway who was not watching for cyclists passing by in the bike lane (And then she proceeded to drive so close as to run me out of the bike lane off to the right side of the road.)

An addition that might be pretty great would be an input button within a reported problem location. Say another user has reported a dangerous intersection for bad design, and rated it severity: 2. Someone else could come by and push a button rating it at 4 and your wizardry could show the average, severity: 3, while also showing the number of users who agree the intersection is dangerous.

so maybe I’m missing the point but wouldn’t a statistic/tip based database be kinda obsolete when everyone already knows what intersections are dangerous? why not have an intersection guide?it would be a bit faster than waiting for accidents to happen.
but I’m just a courier what do i know

Thank you for the effort.
Two others have already asked about using it in different cities. This will work. Simply input your postal code and hit the Jump To Location” button. What I wonder is, will this screw up the repoing and utility of it or will it make the tool even better? (That’s not rhetorical, I actually would like to know)

I imagine you considered integrating this with the stolen bike data. Why not offer the option of “Theft” under “Report Problem Area”? Certainly it broadens the data set but if you could also filter reports by that criterion it seems it would allow people to see where the worst theft locations are too so all could take appropriate action.
Thanks again.

I saw the report on KGW tonight about this site and feel I need to post a comment.

Yes I am a driver, yet I’m also involved in the development of an alternate transportation vehicle, so here are the problems that I see with bike riders in Portland.

1. Viability (this does not apply to everyone).

Have any of you noticed how bright the headlights are on motorcycles and how even some of the new ones have “Mars Lights” (from 1950’s trains) in them as well? Let’s face it, the little LED or any LITTLE head or tail light when meshed in with all of the other lights on the road makes bike riders extremely hard to see at times of day in many locations.

“But your the driver, you’re in the car, it’s your responsibility to see us, it’s the law”

Common sense dictates that vehicles are bigger and if you can’t be seen then you’re going to be hit because the driver doesn’t know that you’re there. It’s also your responsibility to be seen and then means paying attention to what the driver is doing if you can see. Reading the road is the key to staying out of accidents, no matter what you use to get down the road.

Don’t cop one if you can’t be seen or are doing something like running a stop sign or red light when you shouldn’t be. And if a car has the right of way because you’re not at the intersection yet when the car moves due to your speed being slower, then zip your trap as we don’t need to hear your selfish biased opinion.

The rules of the road do apply to everyone and that includes bikers.

3. The Lane Blockers/Encroachers and the left turn riders:

Look, you’re not a car, truck or bus so if you don’t have an electric motor assist, then move to the right hand side of the road and don’t block the road lane as you’re no more important than the rest of us. If you’re caught behind a bus that’s blocking the bike lane to let people off, then don’t pull out into traffic and expect ever car to stop for you, that’s just plain STUPID, and especially at night, even if there are several of you in a row like sheep following the leader to go off of a cliff. Plus if we as drivers have to yield for the bus to pull back out into traffic, then so do you as bike riders because Yield means Yield, period!

If you’re making a left turn from a turn lane, then BUST YOUR ASS and get moving, those green arrows are short enough and if your putzing along, you’re screwing us all over, including the biker a few cars back.

Some people don’t like to share the road, contrary to what you may think after reading this, neither do I, but just because you’re on a bike doesn’t mean that you can’t be called a stupid driver too if you do the things listed above.

Also, you don’t need to flip it back because that doesn’t solve the problem.

This tool is really amazing and will be of great help. I really appreciate the good work, keep it up guys.