In 1993 an upstart bike advocacy group called the Bicycle Transportation Alliance — headed by Rex Burkholder (now a Metro councilor) — filed a lawsuit against the City of Portland because of a lack of bicycle facilities around the Rose Garden Arena.

This morning, 15 years after that legal battle (which ended after the BTA backed off two years later, their point being made), PDOT crews (with the blessing of TriMet) began the striping and installation of new bike lanes through the Rose Quarter Transit Center — making passage through the area for bicycles safer, more efficient, and legal. 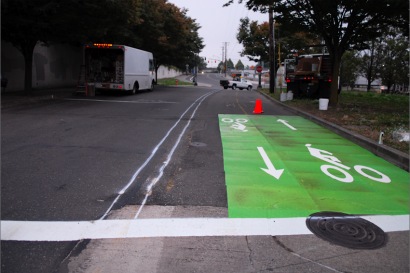 The new lane is 12-feet wide to accomodate two-way bike traffic and it runs from NE Multnomah to N. Interstate. 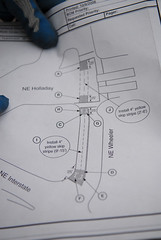 The original plans called for the entire lane to be filled in with green thermoplastic material. However, budget constraints have resulted in a plan (see the blueprint of the work order at right) to only fill in four, 25-foot sections of the lane with green.

PDOT’s bike coordinator Roger Geller says that they decided to save money and focus the green areas where pedestrians, bicyclists, and TriMet operators should pay extra attention. Geller added that PDOT will also install new bikeway network signs in the area. 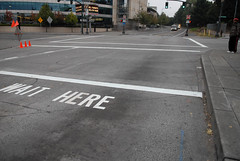 In addition to the new bike lane, a new bike box with the “WAIT HERE” marking has been installed on the SE corner of NE Multnomah and Wheeler (it will be filled in with green later today). This is intended to give more space, prevent right-hooks, and provide added visibility for bike riders who are headed north on Wheeler.

PDOT has also added a fresh coat of paint to crosswalks and TriMet will re-route some buses off of NE Wheeler. In addition, PDOT plans to remove the existing bike lane from NE Multnomah, which will now see more bus traffic and a new bus stop. 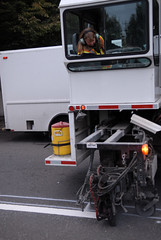 There’s nothing like the smell
of fresh bike lane paint
in the morning.

On a side note, the Portland Tribune published a story about the new bike facilities this morning. They tried hard to frame it as a controversy with the headline, Busy Rose Quarter Transit Center gets controversial bike lane: There’s still a conflict as TriMet bus drivers oppose bicyclists in transit hub . They dredged up the petition signed by bus and MAX operators that strongly opposed the changes.

What the Tribune didn’t mention is that the informal, unofficial petition was acknowledged by TriMet and the operator who wrote it has since attended a field review of the proposed changes and is now working with TriMet to develop training materials to help fellow operators deal with the addition of the new bike facilities.

The new bike lane, bike box, and signs are expected to be completely installed by this evening, at which time, the Rose Quarter Transit Center will be open for bikes. Finally.

____
UPDATE: Michelle Poyourow from the BTA just commented that there’s a ribbon-cutting event planned for tomorro (Thursday) afternoon at 1:45 pm with Commissioner Sam Adams, TriMet Director Fred Hansen, and the PDOT, BTA and TriMet staff that made this come together. (**Meet at the Peace Sign Garden above the Eastbank Esplanade. Do not congregate in the Transit Center.)

Yay! Now I can legally do what I have always done!

Looks like I’m going to have to go and check it out soon… When’s last Thursday? ðŸ˜‰

I might have to check this new option out. I currently bike on NE Multnomah to NE Lloyd and go past the convention center to access the Steel Bridge.

The Trib article noted a portion on NE Wheeler that cyclists are required to walk past. Is this still the case or is it another example of their outdated reporting?

I think the Trib’s reference to walking bikes describes the current system, and not the new one. Poorly worded, but not inaccurate. This intersection has been THE hang-up in my daily commute, so I’m extremely pleased the fix is now in place.

There will be a big fuss tomorrow (Thursday) afternoon at 1:45 pm with Commissioner Sam Adams, TriMet Director Fred Hansen, and the PDOT, BTA and TriMet staff that made this come together. And lots of happy bike commuters.

You should join them for an inaugural ride down the center and a ribbon-busting ceremony. Wear green!

Jonathan (or Roger, if you’re reading this), how much are the 4 sections of thermoplastic costing the city? How much would it have cost to cover the entire lane as originally envisioned?

Thanks for continuing to cover this story!

Remember…Just Because It’s green doesn’t mean you don’t have to pay attention.

Sweet. But… Is green the right color? Seems to me it’s a color that’s already used in traffic control.

Can I ride through here today on my way home from work at 5:00?

In the future, can they raise up the cycling area or use a low curb or those plastic lane designators to really segregate it. This might be a great area to test out the concept of separated bikeways for the rest of the city.

So they’ve run out of money for green plastic? Is this why they haven’t filled in the bike box on the NW Broadway & Hoyt, or is that the test intersection to see if someone dies if you just install a bike box but no green plastic?

This is such a milestone. I have long thought of this as both a real and symbolic black eye for Portland, but honestly, I never thought we’d see a solution. I always said that if we ever actually solved the Rose Quarter I’d personally host a party to write thank-you notes to Fred Hansen, so here’s my chance:

Please join me next Monday 10/20 at the Hawthorne Lucky Lab at 5:30 pm for a thank-you note writing party. I’ll bring the giant novelty cards and the felt-tip pens; you should just bring your stories about how much this fix means to you.

So I tried to take this route this morning, but my trip straight down NE Multnomah took me to Interstate. Where am I supposed to turn to get on NE Holladay?

I’d been waiting to hear that it was actually open. I’m going to try it out tonight on the way home!