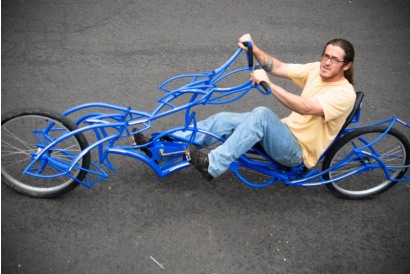 Neal Fegan and “Blue” outside his shop in St. Johns.
View slideshow below
(Photos © J. Maus)

In some ways, Portland seems like the most obvious, and yet most unlikely place for Neal Fegan to have ended up. 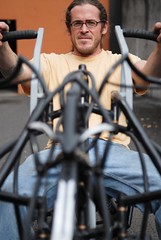 Up until just a few months ago, the 32-year-old art school graduate and former bike messenger on the mean streets of Manhattan, was plying his trade in a shop under the big skies of Bozeman Montana.

Early this spring, he entered a few of his “sculptural velocipedes” in an an art bike contest being held in Portland. Then, one week before his planned trip west, he got evicted from his apartment in Bozeman and decided to pack up and move to Portland for good.

Trained as a sculptor, Fegan built his first bike on a whim about two years ago and was immediately hooked. “I remember the first one I built,” he recalled “I thought, holy crap, I can make it and ride it.”

Since then he has launched Montana Transit Authority and creating art bikes has become his passion. “I wish I could just do this all day” he told me, scanning the bikes in his shop.

But for now, Fegan works as a breakfast cook at a bar in St. Johns, escaping into his shop under the St. Johns Bridge where his wild creations come to life. 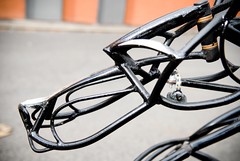 Fegan’s aptly named “Dog” has a head and tail
that bobbles side to side as you pedal.

Fegan’s bikes are a stark contrast to his subdued personality; they are equal parts chopper, rolling topiary, and kinetic sculpture. As he rode one of them (which he calls “Dog” because of its head and tail) in the parking lot in front of his shop, it struck me as something Batman would ride after Peak Oil hits. 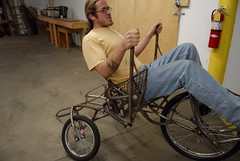 And, at 10-14 feet long and upwards of 80 pounds a piece, his bikes have no trouble turning heads on their own.

Fegan attributes his building style to his parents and Legos.

His dad was an engineer for the Navy and his mom was an artist. “I grew up looking at art and engineering books,” he said. That might explain how he arrived at his distinctive 8-point steering design. 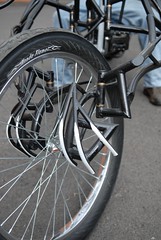 Note the floating pivot points
near the axle (which is held
by claws).

Several of Fegan’s bikes have a nifty steering system that he says was developed after seeing chopper motorcycles. “I like the way they look, but you can’t turn them because they rake the neck out. If you can’t turn, who cares how good it looks?! I’m a sculptor, I play with Legos, I wanted to do it differently, and it ended up working really well.”

Riding one of the bikes with the 8-point system, the first thing you realize is that both of your hands steer independently. It takes some getting used to, but once you’re rolling, the ride is smooth and you feel like you’re piloting something more than just a bike.

For Fegan, going beyond the ordinary is his main inspiration. About his “Dog” bike, he said, “When I was a little kid, I always tried to ride my dog…so I figured, now I’m making bikes, I might as well make a dog I can ride.”

See the “Dog” and more from Neal Fegan in the slideshow below:


Come and meet Neal at the Oregon Manifest show (October 10-12th). At the show, you can find out what makes the “Dog” so special (you can’t see it in my photos) and you can also get a glimpse at his latest creations (including a new pedicab/utility/work-bike design that could be revolutionary).

Neal, Keep up the Awesome Work!

That was one SWEET ride…

I’d love to know what the price range is for one of those works of art.

oh man, that 8-point steering system is blowing my mind!

But can you take them on Tri-Met?

These are incredible works of art, and I look forward to getting a chance to see them up-close. They look fantastic!

Amazing, I love the flowing aesthetics of the design. Would be fantastically pleasing to cruise along on one of those. I’m a fan of “Blue.”

Johnny from MTA here. The a complete basic 8 point steering frame, “Blue”, starts around $2500. The 3 wheeled “Red” will cost around $1500. If you want to add custom sculptural elements the sky is the limit.
JF

These are the most beautiful choppers I’ve ever seen. The greyhound sculpture on “Dog” is frankly museum worthy.

neal,got a christmas letter from susie.she said to check out your site.very cool!are the bikes carbon steel tube?alloy?alum?where do you get the tubing?also,could you give me her e-mail address. cousin dan

Hi Neal!
This is your old neighbor on Terrace Crest in El Cajon. I love your bikes! As an art teacher myself, you are doing what I only dream. Congratulations! I got a new kind of bike for Christmas. It’s a Trikke. Look it up on the net (Trikke.com) I am still learning to ride it but I know it is going to be loads of fun when I do. I got a letter from your parents at Christmas. Nice to hear everyone is doing great.

Hey Neal,
I was a childhood friend of Bobbby’s. Your parents sent Jonathon’s Velocipedes
video to mine… how great! I remember your big gray “lap” dog… I know what you mean about wanting to ride him. Looks like you are fulfilling a dream. Congratulations!
Beth