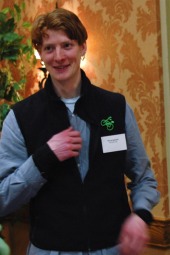 The announcement was made by TriMet communications director Carolyn Young during a presentation at the recent Pro Walk/Pro Bike conference in Seattle.

Baldwin starts today and he told me last week that he’ll be working with TriMet’s GIS & Location-Based Services team doing software and Web development. Back in June, TriMet unveiled their latest online trip-planning tool and TriMet developer Bibiana McHugh said she was working with Baldwin to incorporate bike routes.

At this time, TriMet’s trip-planner is not truly multi-modal (meaning it can’t give complete, door-to-door route suggestions if you bike or walk to the transit stop), but perhaps with the addition of Baldwin to their team that goal will come closer to reality.

Screen grab of the bike route from my office to City Hall compliments of byCycle.org (notice the overlay of the city bike map).

Baldwin told me last week that, “Working on byCycle directly will not be part of my official duties.” He also added that “there is some interest at TriMet for a multi-modal trip planner, but I wouldn’t want to speculate on that.” (TriMet’s McHugh wasn’t available for comment at press time).

Baldwin sprung onto the bike scene nearly three years ago when he integrated data from Metro’s Bike There! map into his Google-map powered byCycle.org tool. He (and his partner on the project Lauren Donohue) later added a blog/website widget (see it in my sidebar below) and they have been refining the tool and trying to raise money for further development ever since.

So, what will happen to byCycle now?

Baldwin says he’s considering “open-sourcing” the code and “releasing it into the wild”. His hope is to let others take over the main development of the tool and he thinks making byCycle open source “will remove certain barriers and lead to a better product overall.”

One thing that some of us around here would find awesome is a map that works well in the iPhone. Please ignore this message if that\’s not you.

I\’d like to see integrated with something like Google Maps. Since Google was so enamored of the TriMet Trip Planner that they imitated it, maybe now they can use Wyatt\’s work to figure out how to include a \”bike there\” function directions.

That\’s really great! Shows a real commitment from Tri-Met to cyclists and peds, and it\’s a pretty smart way to build a very powerful tool. Wonder if they will license it to other municipalities? (Or if the source will be released?)

Congrats to Wyatt. One of hundreds of bike guys and girls finding their way into the mainstream. The revolution rolls on 2 wheels.

That is so cool! I love bycycle and hope he does release it for all.

I\’m with you on creating better maps/trip planners for the iPhone and other mobile devices. That\’s something that\’s been on my to-do list for years. I\’m hoping that making byCycle open source will help us roll out these kinds of improvements much more quickly.

Lauren, in addition to being an animal lover, is a nice person. Well, at least she was very kind to me when I was getting established in Portland. So I\’m all too happy, three years later, that Lauren and Wyatt\’s byCycle project has been so fruitful.

I\’ll be excited when it\’s open-sourced… I want to see the code and maybe start contributing and adding maps for other places.

As someone who is not program-literate, I still find ByCycle occasionally incomplete and/or frustrating to use.

I hope that there will be enough people who actually know how to work with \”open source\” programming and who also have the time and energy to keep tweaking ByCycle to improve and expand it.

Wyatt and Lauren, I\’m one of the many people who use your site and never say thanks. Since I live in Vancouver, I don\’t know Portland routes that well. Just wanted to say thanks here – finally!

Congrats on your new job Wyatt!

Congrats, Wyatt! I look forward to seeing the improvements to Tri-Met\’s tools that you\’ll bring, and it\’s great that you\’ll be compensated for your work. Best of luck w/ Tri-Met!

Wyatt Baldwin does a kick ass job for Trimet. It’s not always easy and I have sat in on a meeting with him last summer and I can say that he is working hard.