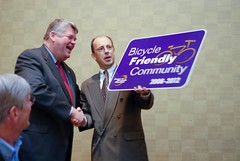 Today at the Westin Hotel in downtown Seattle was the official opening day of the Fifteenth International Symposium on Walking and Bicycling, a.k.a., the Pro Walk/Pro Bike conference.

Held every two years and put on by the National Center for Walking and Biking, the conference is a meeting of the minds of America’s best and brightest in the fields of bikeway and pedestrian planning, engineering, design, education, advocacy, and so on. They’ve come to learn from 80 workshops, network with others in their fields, and get an up-close look at Seattle.

At the opening plenary, the new executive director of the NCWB Sharon Roerty announced a record 800 people are attending this year’s event. 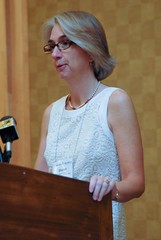 Sharon Roerty of the National
Center for Bicycle and Walking.

Roerty used her opening remarks to inspire and rally the troops. She posed a challenge to the assembled advocates and consultants to convince people to let go of their fear of change and to, “Move our communities from reservation to implementation.” She urged participants to, “…help shift people’s attention from the polls and the 4-year election cycle to good policy.”

“The best way to get past the fear of change,” remarked Roerty, “is to get them to participate in the change.”

Also speaking this morning was editor of Governing Magazine and incoming President of the NCWB Peter Harkness. Harkness painted a picture of opportunity to push the bike issue into the forefront of the American mainstream but also warned of a “dark side” of increased altercations with motor vehicles that has emerged.

“The car culture is not going to fade away easily…but it’s finally on the run. We have to usher it out the door.”
— NCBW president Peter Harkness

“The car culture is not going to fade away easily,” he said, “but it’s finally on the run. We have to usher it out the door.”

Following Harkness (and others) was a short address by Seattle Mayor Greg Nickels. Nickels, who was introduced as “the poster-boy of local governments taking control of national issues”, used the opportunity to share his success in getting 850 mayors to sign onto his US Mayors Climate Protection Agreement.

On the topic of Climate Change, Nickels said he has “great hopes” that our country’s next administration, “Will not only acknowledge it, but will take the revolutionary action to solve it.” 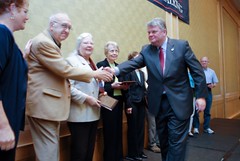 On transportation, Nickels declared that in Seattle, “We recognize that the age of the automobile has passed,” and he said they’re working toward a balanced transportation system. A major part of that balance is the 25 mile Burke-Gilman Trail that was opened in 1978.

Backing up those words, Nickels announced that he’ll include $8.6 million in his upcoming budget to complete a major missing link of the trail. He hopes that connection will help with his goal of tripling bike mode share in Seattle by 2010.

Looking back before moving forward, Nickels then paid a special honor to the community activists who fought to create the Burke-Gilman Trail 30 years ago. In a ceremony following his remarks, Nickels gave several founding members of the Burke Gilman Trail Park Committee a special plaque for their efforts and he officially proclaimed September 3rd as “Burke-Gilman Day”.

Also at this morning’s opening plenary, executive director of the League of American Bicyclists Andy Clarke presented Mayor Nickels with a Gold-level Bicycle Friendly Community award. According to David Hiller, advocacy director for Cascade Bicycle Club, Seattle has a bike mode share of 4.2%.

Seattle joins 84 other U.S. cities that have a BFC designation and becomes just the seventh to receive the League’s “Gold” ranking.

Speaking of rankings, tomorrow night I’ll be able to share the scoop on how all 50 states faired in the League’s new Bike Friendly State rankings. I met with League director Andy Clarke and program manager Jeff Peel about the rankings this morning, but I’m sworn to secrecy until tomorrow.

Stay tuned for that and more coverage from Seattle in the coming days.

Oh, how I miss the Burke. Not so much those dark, rainy rides to my morning Civ Pro class, but mostly those weekend rides from Fremont out to Redmond. Definitely the folks who got the Burke made deserve some huge credit, and so does Nickels.

Just so long as they aren\’t better than Portland, they can be whatever metal they want. 😉

But really, congrats to our starbucksy neighbors to the north. Excited to see how Oregon fared tomorrow!

I hate to be the one putting this out there, but Seattle is certainly not the model of city cycling I would like to see disseminated to the rest of the country. The BurkeGT is fine for riding on with a family, under 12mph, but certainly should not be considered infrastructure for a bicycle commuting culture. The bike lanes in Seattle have long been limited to dangerous roads like 2nd Ave (where folk drive about 35+) and have included parking to the left of the lane. Nickels is pushing downtown density without making the downtown easier to navigate on foot or by bike. Not a great example. Fortunately I have moved to PDX, a city that has a truly diverse cycling community behind it, not just a flashy facade of preconceived notions.