“There are a lot of [bike-sharing] systems out there and we really want to pick the best model.”
–Shoshanah Oppenheim, transportation policy aide for Commissioner Adams

With the announcement last week that the City of Portland has canceled their search for a bike-sharing vendor, some are wondering what’s next in Portland’s public-bike future.

Adams’ transportation policy staffer Shoshanah Oppenheim told me that, once they began to “delve into the meat of the responses” to their Request for Proposals (RFP, which was sent out on July 17, 2007), “it was clear we needed to do more analysis.”

“we can’t talk to potential providers and continue to learn from them… it was hindering our ability to do the analysis we wanted to do to make sure the program was the right style and scope that would work for Portland.” 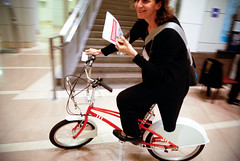 These “SmartBikes” are planned for use in Washington D.C.

Oppenheim spoke to the complexity of rolling out a public bike-sharing system. Commissioner Adams just returned from a trip to Stockholm (and other places) to observe their transportation infrastructure and even that system, she said, “has a lot of flaws”.

“There are a lot of [bike-sharing] systems out there and we really want to pick the best model.”

She’s right. Choices for bike-sharing systems abound. The most successful to date has been Paris’ “Velib“, but cities all over the world already have programs in place (or are planning them). The Bike-Sharing Blog has created a Google Map mash-up of them all.

If Portland can’t find the right vendor, perhaps we should just design, create, and manage the system ourselves? The city of Montreal did, and it looks to be a winner. Their recently launched “Public Bike System” boasts modular racks and kiosks, uses wireless techonology, and is solar-powered.

Oppenheim didn’t offer any hints on which direction Portland would go, but added that mayor-elect Adams is, “committed to a system that is effective”.

To that end, Oppenheim says this time around they’ve assigned a project team staffed by PDOT employees to do further analysis and “go deeper” into how to successfully implement the system.

Oppenheim wouldn’t put a date on when another RFP would be issued, but said they would put another one out once they’ve completed their internal research.

For more on Portland’s bike-sharing quest, view the coverage archives.

Sounds good.. like it\’s still alive.. I hope the bike sharing system they do get will allow parents to transport not only themselves but their kids; with at least some of the bikes having seats for a toddler or small child.

I really like the \’let us build it ourselves\’ approach. We should do it.

Also, I\’d like to see bike advocates from different cities work with each other. I don\’t know how it might work, but it would seem to me that if we work together somehow, we might be able to achieve more leverage – over vendors, for instance. We could say things like, \”Look [Company X], Portland is going to do this bike share thing with or without you. We would like you to be a part of this. If it goes well, Austin and San Francisco and Kansas City and Miami are going to look _very_ favorably upon you.\” Maybe it could even be semi-formalized.

A bike sharing system could help to aleviate the pressure on the MAX system too. I know many commuters who would love to use a bike on both ends of thier commute, instead of bringing a bike on the train with them… Does Trimet have any interest in adding it to thier services?

Coaster has a key point of the bike share. Check in and check out at MAX stops should be the first priority. Riding the bike from MAX to your destination could seriously relieve TriMet\’s bus load and lighten the bike load on the trains.

How cool would that be if your monthly TriMet pass also included bikes!

Riding from the MAX stop to some kind of town center is great, but the way West side is setup, kiosks should be near the employers which may not be near anything else in particular.

I\’m sure west side employers would consider redirecting funds from shuttle services to bike share.

I used the Paris system when I was there last summer. It was really quite nice. You could pick up a bike in one location and drop it off in another. If racks were too full, they would automatically contact the home base and bikes could be moved around. I really enjoyed the ability to drop a bike off at a destination instead of having to worry about locking it up. Having plenty of stations with 10-15 spots around town was extremely helpful. Big hubs were also nice at the major transit hubs.

The Paris system is awesome. I\’ve have a great picture of a barge on the Seine from last fall loaded up with bikes being shuttled back to somewhere…

It\’s a great idea. Not for the City government, but it\’s a great idea.
The City should instead be figuring out some way to pave the dirt roads in the Cully neighborhood. That\’s what they really need to do. I mean, they can cobble those streets to make Cully feel more like Paris if they want, but they should figure something out.

Why would we build it ourselves rather than learning from others, including from their mistakes?

What makes us think the CoP has the engineering, programming, and management expertise to \”design, build, and manage\” such a system?