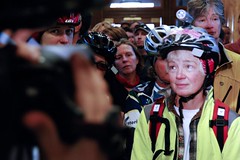 Jan Verrinder at the bike safety press conference
in City Hall a week after her husband Bob
was nearly killed in a collision with a
car on Marine Drive.
(Photo © J. Maus)

The two young lives we lost grabbed most of the headlines, but sandwiched between both of them was another tragedy that almost had a similar storyline.

Luckily, the collision between Bob Verrinder and a car on Marine Drive on October 18th did not claim his life. But even today, he struggles on the road to recovery.

His wife Jan Verrinder has been by his side the entire time. Initially following her husband’s brush with death, she became activated and made her face public at a City Hall bike safety press conference. But since then, she has focused solely on supporting him.

“They told me in the beginning over and over, ‘It’s long and slow.’ They were right.” 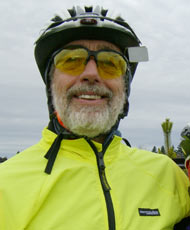 Bob Verrinder before the crash.
(Photo courtesy of Bob’s friends)

Jan says Bob is in good spirits and that, “Physically and mentally he is improving. ”

She credits the trauma doctors at Legacy Emanuel hospital for saving his life. Bob was diagnosed with post-traumatic hyrdocephalus (a.k.a. “water on the brain”) back in January and he recently “began to come back to life” after shunt surgery which Jan says, “saved his brain from drowning”.

Fully healed on the outside, Bob is now working with therapists to help heal is brain, relearn movements, and strengthen his muscles.

Jan told me she has read the blog of Anna-Carin Davidson, whose husband Eric is also still recovering from a hit-and-run with a car back in May. “It was difficult,” she said, “because her story reads so much like my log of daily letters I wrote to Bob before he came out of the fog.”

Her support has been steadfast, but Jan says, for people like her and Anna-Carin, there isn’t much choice.

“People marvel, but honestly there’s not much to do other than what we’re doing: hang in, look for the good, fight when you must, collapse when necessary, and love and support. I wish them well.”

Things will never be the same for Jan and Bob Verrinder, but they still have each other.

“I was told early on that I would have my husband back, but that he would be different. I can see that the doctors were right. Fortunately, I love New Bob as much or more than Old Bob, so we will make it, though our lives are changed.”

But even though much has changed, some things remain the same, and Jan remains optimistic about the future. “His sense of humor is just as good as it was. Every day I see something new and good.”

Thank you, Jonathan, for the update. What strong people Bob and his wife are. It is good to know that there is reason to be optimistic about Bob\’s future, despite the long road of rehabilitation still ahead.

Thanks for posting this Jonathan. When I am writing articles on pedestrians and I include fatality statistics, I look for the injury statistics and they are hard to find. It is good to be reminded how crashes change lives. And that we need to continue to work to improve our laws and streetscapes to protect vulnerable users.

Thanks Jonathan. I follow Anna-Carin\’s blog daily and pull for Eric (even though I don\’t know them), and I know the cycling community has been supportive due to your publicity. We\’ve donated money through published info and sent cards and some great souls have donated their time and efforts to help out, so this information is always good to publish along with these stories. My heart goes out to Bob and Jan in their struggle; best wishes for a full and speedy recovery! If there\’s anything we can do please pass info along through Jonathan.

I\’m had them in my thoughts all year long. Thanks for the update.
One thing I\’ve wondered about regarding this accident is do the flashing pedestrain lights actually change from yelllow to red or do they just flash yellow? If not why not. I as telling other car drivers about this accident recently. One said the though yellow eant that he still had the right of way & for pedestrian or who is crossing had to watch for him. The other knew it means to stop & them proceed. I know in this accident the yellow lights were flashing. Given the servity of the accident wouldn\’t it be better to go to flashing red?

I wrote (e-mailed )to the City of Portland transportation department and asked that they look into this intersection. I ride it almost weekly and can see how dangerous it is because it\’s not clear to either cars or peds/bikes who has the right of way or when. They investigated the incident and dismissed it, saying there is enough visibility for cyclists/peds to see cars coming. Of course, if that were true, a cautious, well-seasoned cyclist like Bob would\’ve seen the car that hit him instead of having his life change. If anyone wants to try the City of Portland trans.dept again – go for it! The more people that complain the better. I suggested they change the flashing yellow to red as well. How many lives could this save? Just one? Still worth it!