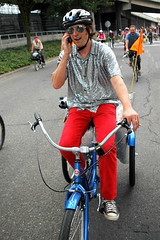 One of the fringe benefits of pedaling around Portland this time of year are all interesting bikes and people you come across.

One such person is Dan Kaufman.

Dan lives just off the Springwater Corridor Trail in Sellwood with this wife Kirsten (a real estate agent who gives home tours by bike) and his three kids.

Dan is the man behind CrankMyChain! Cycle TV, and in addition to being a fab filmmaker, he’s also a songwriter and audio/video/internet guru. 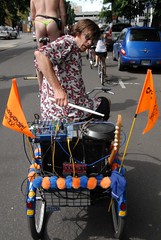 To do his thing at bike events throughout the city, he’s created what he calls his “Disco Trike” — a news-gathering, music-playing, live webcasting, party machine.

Dan rolled out Disco Trike Version 2.0 for the first time on the Splash Dance Ride over the weekend and he rocked while we rolled and danced in several downtown fountains.

I asked Dan to share the rundown on what he’s got on the Trike.

“The sound system is powered by two 36 amp hour, six volt, deep discharge gel type batteries ran in series — (it can run all day). I use my Polytone bass amp for the amplification.

I have tied a whole slew of analog gear I have collected since the late 80’s including, a DR110 Dr. Rhythm drum machine and a Synare analog drum pad which I refer to as the electronic gong.

Through the mixing board I also hook up an iPod, my guitar (with octave pedal so it can sound like a bass), a microphone, and a loop pedal.” 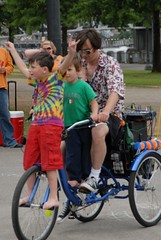 It also doubles as a kid-carrier.

The Splash Dance Ride was his first time out with the new, instrument-enhanced version of the Trike and Dan says he’s still learning the system.

“I hope to get a lot better at running the music side of the system to play dance beats and my own compositions like Naked Bike Ride and Now I’m Rollin’ [two songs he wrote himself].”

He apparently also made quite an impression after his Splash Dance debut. “Maybe some folks will even hire out me and the system. I got some interest at Jameson Square fountain.”

See the Disco Trike in action in the short video clip below (note: the music is all live from Dan and the Trike!):


Keep on rockin’ in the (car)free world Dan!

Just needs a wah-wah on his pedal and he\’s all set!

SKUL gang in Boston has a real disco bike. It is a tall bike with a ~2ft diameter motorized disco ball, lights, and soundsystem. Do comments support HTML tags to link to photos?

Thats cool, I bet all that added weight makes it more difficult to stop though. Not to mention you might not even know you need to stop if your trying to adjust the music. Great bike regardless though.

I\’ve been considering building a rolling projection/light show. Perhaps one day we will combine forces.

Right on. Super Thanks for the plug, Jonathan! The options are unlimited.

We love you, Dan!

NICE! Dan! Can\’t wait to see it live in person. Will it be at MCBF this afternoon?

Hello, I\’m just ambling on here from google… I saw Todd\’s comment about the disco bike in Boston and I swear that I saw it (along with a pack of other CRAZY bikes and bikers!) last night at about 3AM riding home from Porter Square and I really want to see some pictures of that crazy crowd. I was too slow to capture it on my camera. It was so RANDOM! Post a link to shots if you have them!

We saw that group too! last night near inman square at around 1:00 am. There was like 6-8 guys on crazy bikes and the tall bike with the disco ball. They were playing Jackson five and had lights going off – who are these guys?? It was surreal!