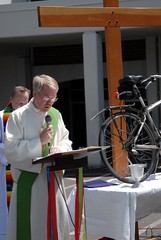 In a respectful and poignant outdoor ceremony, St. Mary’s Cathedral in Northwest Portland held their first-ever Blessing of the Bikes on Sunday.

The service opened with a hymn and continued with a series of prayers and intercessions meant to recognize and celebrate the contribution of cyclists to the community.

A large wooden cross was carried out into the courtyard and a bicycle was placed atop a table at the base of the cross. A small, yet sincere crowd of about 40 or so people had gathered under blue skies to hear the rites and take heed of the blessing.

Several times during the ceremony, bike bells twinkled gently and offered a sense of connection among those in attendance. 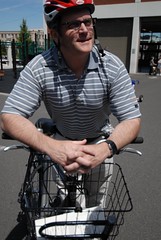 Unexpectedly, mayor-elect Sam Adams rolled up (on his shiny new Trek hybrid with a front basket). He said a few words at the end of ceremony and shared with us his efforts to partner with the community to improve bike safety throughout the city. “Every loss is an incredible tragedy,” he said. Adams then added that he and his staff are working to improve bike safety and that, “it happens one project at a time.”

At the end of the prayer, the bikes in attendance where splashed with holy water.

After the service, I asked Deacon Thomas Gornick for a copy of the words he shared. Here are a few of the passages where bikes where mentioned:

“Let us then, call on God to bless those who have worked on bicycles, roads, bike paths and other projects to bring people together and to protect with his gracious help those who will make use of roads, paths, bicycles and all means of transportation.”

“Through the intercession of Our Lady of Ghisallo [the Patroness of Bicycling], who watches over travelers and cyclists, may all those who ride in our community have safe journeys and be guided by a spirit of community and kindness.”

After that prayer, six names were read and a single church bell rang out after each one. At that moment I noticed Tracey Sparling‘s aunt (Susie Kubota) and mom (Sophie Sparling)… 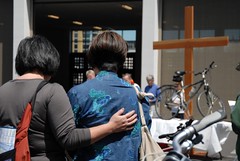 Even a few bike cops showed up, hoping for a little bit of added protection while fighting crime perhaps? 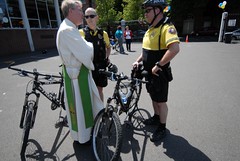 — For more photos of the event check out the gallery.

I\’ll admit I\’m a little perplexed by the blessing, but I\’m not religious so…

I\’d love to hear from a person in attendance, what this action meant to you as a religious or spiritual person.

My girlfriend and I were in attendance yesterday. This was our first ride together and I\’m so glad we chose this event to attend. The reading of the names was a very real reminder of how dangerous life on the roads can be.
We were both really impressed that Mayor Elect Adams showed up. It\’s nice when an elected official shows up but doesn\’t have to.
Anyway, just wanted to express my support for events like this. We had a great afternoon and look forward to next year.

seems…odd.
has the church ever blessed a motorcycle?
pair of pedestrian walking shoes?

blast! i knew id forgotten *something* this weekend. next year, i suppose.

and bahueh – ive heard of churches holding blessings for all kinds of things – im pretty sure cars among them – but this is portland, sooooo… 🙂 and as far as my bike is concerned, a little extra blessing cant hurt! 🙂 its just a little step further than affixing a st christophers medallion (patron saint of travellers/transportation), or (as i have) a madonna del ghisallo medallion. now if only there were a archangel gabriel medallion (patron saint of messengers), cause, well, thats pretty badass if you ask me, whos hardly catholic 🙂

Everyone was very friendly and kind and I got the impression that the parish and clergy simply wish us well out there. They even blessed the people who build our roads and bike infrastructure. I\’m not particularly religious anymore, but I enjoyed the fellowship and appreciated all the positive thoughts projected in our direction.

I hope they do it next year and that more people check it out. It may not help, but it also couldn\’t hurt.

bahueh (#3) – They bless cars in Copacabana, as related by Elicia and Andy here:

I think it\’s fantastic. Then again, I grew up Roman Catholic.

i attended: i\’m not at all religious, but i appreciate a good ritual. and as a new bicyclist, i don\’t mind a little extra protection. 😉 the ringing of the bells (both large & small) was awesome, and the recognition of those injured/killed was unexpectedly moving.

i was surprised it didn\’t seem to make it onto the news, though, considering how many tv cameras were there. just a story in the oregonian (and they didn\’t include the photo online, it looks like.)

i also attended, not because i am catholic but because i believe in the power of prayer. Not that a \”god\” answers our prayers as such. Call it setting intention, whatever, it\’s still powerful. i do believe in a deity and i pray to it; it\’s the same one the pope and pagan are praying to in my construct, and i\’ll take all the blessings of safety i can get. As has been stated, i most certianly am not increasing my chances of geting knocked out of the saddle by enlisting any cosmic forces . . . unless of course, i was hit on the way to the ritual.
Which i wasn\’t, thank God(dess).

For any pagans out there, the relevant deity is Mercury, aka Hermes, Wodan, etc. He is the god of messengers, road travelers, and athletes, among others.

Thanks to everyone who attended and to Jonathan from BikePortland for the postive support.

Like so many I was very touched by Tracey\’s family presence. It made our first blessing special and focused our conintued need to support each other in the community.

As I headed home, I rode past 15th and Burnside. Tracy\’s family was decorating and fixing up her \”Ghost Bike.\” It was a special ending to a good day.

As far as respect for those killed. Of course.

I don\’t want to turn this into a religious debate, but why all the hatred of Catholics? Seriously, what sort of propaganda have you been reading to make you think nothing good could ever come out of a Catholic church?

And haven\’t you ever heard of Catholic guilt???? Of course this ceremony was sincere.

People feel bad that bicyclists have died, people are worried for the state of the environment and want to see a world where more people ride bikes and can do so safely. This is how Catholics respond, with ceremony and prayer. It\’s actually very comforting and helpful to take a moment to stop, reflect, and show reverence for situations that feel overwhelming.

And boo boo, if you really feel that way, I challenge you to sit down and have lunch with the priest who performed the ceremony, share your views in a respectful manner and listen open-mindedly. I bet he\’d be willing.

All the best cyclists are affiliated with the Pedal-Powered Goddess.

Did you know you have an eternal bike soul?

Have you accepted the Pedal-Powered Goddess as your personal saviour?

Skwaraz, that was incredibly sweet and … bizarre. I had to listen several times. She is very compelling.=)