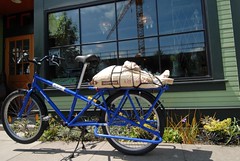 On Saturday, I decided to put the Yuba Mundo through a few paces.

When he dropped it off last week, local Mundo man Jeremy Towsey-French said the bike excels at carrying awkward loads. With that in mind, I decided to use it to pick up a few things I needed around the house — two large wooden screen doors and a 50-pound bag of chicken feed.

The bag of feed (which I picked up from Pistils Nursery on N. Mississippi) fit nicely along the top of the rack and I used Jeremy’s webbed, bungee straps to fasten it down. At 50 pounds, the bag of feed was only about 12% of the maximum capacity of the stout rear rack, so I headed down Mississippi to a recycled building materials store to add to the load.

Once there (with the help of a very nice man named Clay), I strapped on two extra-wide, wooden screen doors. As you can see from the photos, the load wasn’t perfectly balanced. One of the doors was placed on its side and the other stood straight up (so much so that I clipped several branches as I rode home).

At first, I was worried the doors would slip off the rack, but as I got going I gained confidence. The bike rode predictably and the large tires helped soak up bumps.

A man on his porch having a cell phone conversation: “… a guy riding his bike with two doors, only on Webster [street]!”

A guy on a bike who passed me by: “For a while there I thought I was in China.”

A lady walking on the sidewalk: “That’s quite a pickup truck you’ve got there.”

I love a bike that challenges people’s perception of what a bike can do — and the Mundo does precisely that. 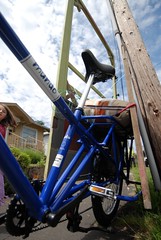 A few months ago I tested an electric-assisted bakfiets and zipped effortlessly through the neighborhood at 18mph. Riding a large and heavy bicycle that could go just as fast as motor vehicle traffic, altered my thinking about bikes. For the first time I truly felt like I was nearing a more level playing field with my motorized counterparts.

Riding the Mundo has a similar effect.

With it’s tank-like construction and beefy, integrated cargo rack, it does seem like a human-powered pickup truck. I could envision a group of neighbors buying a Mundo and keeping it as a shared resource for use whenever hauling beckoned (whether it was a trip to pick up lumber or just a long grocery list).

The Mundo is not a city bike, nor is it a bike most people would want as a daily driver, but it excels at its intended purpose — utility. If you want a bike that rides well even while carrying massive loads, without putting a massive dent in your pocketbook, a Mundo might be right for you.

— The Mundo is made in Germany and it retails for just under $1,000 (with bi-pod kickstand and fenders).
— Visit StumptownMundo.com for more information.

Wonderful colors on the photos, Johnathan. That blue frame looks beautiful loaded up with those gray and green screen doors.

Jonathan, What are your feelings on the mundo as a potential family bike?

i\’m sure it would make a capable family bike. Jeremy tells me that Bobike (maker of great child seats) has hardware that would fit the Mundo rack.

I didn\’t check to see if my Burley trailer could attach to the axle or not.

And I too thought about how perfect it would be for a bike-based business… especially if you had some custom work boxes made for the rack.

it would also be great for pulling up to art events like Last Thursday on Alberta and displaying your wares.

What do you think are the pros and cons of this bike versus an Xtracycle setup?

What an awesome experience! It sounds fantastic.

Jeremy let me take one for a short spin (with my daughter sitting on the rack) at the Voodoo parade. My first thought was how stable it felt – no discernable wheel flop at all. They dubbed the color \”Peacekeeper blue\” – as in UN peacekeeper color. I don\’t think I\’d use it enough to justify the cost (and hauling it up and down the basement stairs!) but I love the idea of a \”community Mundo.\” I\’ve thought before that everyone on the street owning their own lawn mower is just silly. This could be like the neighborhood pickup truck, only cooler.

Wow, I just can\’t believe that load is safe by looking at those pictures.

I guess I\’d need to try it for myself- it really does seem incredible.

So I\’m curious–are these bikes available to rent, say, by the hour/day for random tasks(such as screen door/chicken feed delivery)?

I only ask because like you said, it would be nice to use for utility purposes, but it doesn\’t seem like an investment if you wouldn\’t use it all the time. ( though it would be nice to have a few neighbors invest in something like this for community projects and the like).

I love the fact that these options exist to further simplify the lives of the bike-only commuters of Portland. yay team!

Great question regarding the Mundo\’s ability to carry children. The solid, integrated top carrier is ideal for hauling smaller humans as the carrier geometry helps keep feet out of the wheels and there isn\’t any flex. Throw a cushy deck on top, add some stoker bars and you\’ve got a seat long and wide enough for two. We cover this a bit in our FAQs: http://tinyurl.com/5aoxfe

I\’m impressed with the abilities this bike has. What worries me is with the solid ability to carry all that weight how solid is that kickstand? I\’d hate to load that bike down and have it collapse while parked.

…remember future bike truckers…to secure your load and carry a red flag/ rag to place on your load end…or the police man will pull you over. 😉

hate to call you out like this jonathan, but im pretty sure that when i bike home with those bags of chicken feed at pistils, theyre 50 lbs 🙂

and jeremy, im pretty sure you could get at least 5 good-sized children on there if youre willing to strap them down like cargo 🙂

chilly willy – id say that load is safe, though i dont particularly like that vertical door. i wouldnt carry it that way, and i do bike cargo for a living 🙂

but i think that the idea of community-shared cargo bikes, even if theyre only within a few families (and yes, even if theyre just longtails 🙂 ), is freaking fantastic – a really great way to work things in for those people who stop me and ask what my long haul costs, saying \”whatd that cost you, about $500-700?\” argh…

70 lbs is 15% of the total load?! that is 466lb load capacity! this is pretty cool, I really dig the rack integrated into the frame idea. similar to one my co-worker said he saw in Amsterdam, a second-seat rack!

There you go – construction workers on bikes!

check the website link on my name ^ – \”one less van.\” It\’s a blog (not mine) that has a bunch of different transportation options for bikes.

I remember 10 years ago I ran into a bum in Eugene who had this massive bicycle that had an extended frame, about 10 feet long, with an enclosed cargo space. He also had an actual cab built around the rider, with around 30+ gears, and even a radio!

It was crazy. It had the acceleration of a semi truck with a lawnmower engine, but he said he could haul 500 pounds in it!

God I wish I had had a camera that day…

I ran in to Jonathan Saturday on Mississippi, got to see the Mundo both empty and loaded. That is a massive looking bike. It appeared to be handling the load just fine, at least from on onlookers point of view.

Later that day I had opportunity to mention this bike to one of the local shops that does bike rental, and the idea of them stocking a rental Mundo was not dismissed out of hand, so that opportunity may exist at some point.

Thom…talk to Mark at Revolver…I know he has been talking about having a long wheel base shop bike. Perhaps he can rent it out between his errands.

Any families in City Center Vancouver what to start a transport bike share system?

I have the trailers and bakfiets. You just need the attitude and cash ($200 per year per family – I would think.)

Too bad Zipcar is not ready to add a bakfiets or 2 to their stable for member use (in Portland). 😉

That\’s actually pretty cool, J.Maus! I\’d hate to have to ride it up hills fully loaded, though– and unfortunately, everything from my house is downhill (which means an uphill slog going home)!

Love the idea of a neighborhood Mundo!

These are all tremendously excellent ideas and I welcome anyone interested in coming by to try out the Mundo. One ride is all it takes to set the wheels of imagine in motion. 🙂

In Indonesia we use to see people riding a regular bike with a heavy load of anything from : oak doors, live chickens, straws, three-people sized bamboo bench, mother and her child,…

this bike is suitable for them, unfortunately the price is not. for comparison, with us$300 you can purchase a decent quality MTB here.

I’m just about to buy one of these, as I need a bike which can get me up and down some severe inclines ( 220 yards in 1 1/2 miles ) on my work commute, carry anything from a full load of laundry or the week’s groceries to eight sacks full of well-rotted manure for my allotment, and give the significant other a nice ride along the canal towpath.