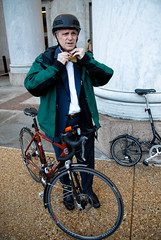 In this photo taken in March,
Blumenauer gets ready to ride in
front of the Rayburn House Office
Building in Washington DC.
(Photo © J. Maus)

In some ways Portland’s Platinum designation is more important for America than it is for our city. What the award does is to provide inspiration and an example to cities around the country to start making a renewed effort to mirror our accomplishments.

Below is the text of a short address Blumenauer made on the floor of the U.S. House of Representatives yesterday:

“There are some people in America that are doing something to provide more choices to Americans, to burn calories instead of fossil fuels. I’m proud that my community, Portland Oregon was just designated a Platinum level bicycle friendly city — the highest level granted by the League of American Bicyclists.

Portland celebrates three decades of consistently applying policies that promote cycling and the third consecutive year of double-digit growth in bicycle ridership. This makes a big difference for real live people. It’s why Portlanders are nine-times more likely to ride a bicycle than the average American. And part of a rich choice menu for Portlanders — with cars and transit and bicycles — which ends up having them drive 20% percent less that the average American family and that translates into a savings of $2500 a year per family that they can spend on education, on housing, on entertainment, on investing back into the community.

I suggest that it’s time to celebrate choices and I’m proud that Portland, Oregon has decided to give cyclists the choices they deserve.”

Blumenauer’s mix of buzzwords and statistics can hopefully go a long way toward convincing more Washington lawmakers that bikes are a cheap, simple, and readily available solution to many of the problems facing our country.

His staffers sent me a link to the video and I snipped out the audio below for your listening pleasure (there’s one hiccup about 3/4 way through, sorry).
[audio:blumenauerPlatinum.mp3]

That was a fantastic little speech. Way to go Earl!

I\’ll say it again – I\’m willing to lose him as a representative if he\’s tagged as Transportation Secretary by the next administration. Who better?

I get \”error opening file\” when I try to listen to the speech.

ack.. sorry.. forgot to upload the file. Should work now!

Mmann – I don\’t know if I agree with that, although that would be pretty slick. The problem is that as a representative he is gaining more and more clout in the House. He\’s the leader of a decently large caucus (the bike caucus); he\’s also on two of the most sought after committees (budget and ways & means). It takes many years to get a rep into a position like he is in, especially from a state like Oregon (I love our state, but we\’re not exactly the heaviest of hitters). Getting appointed as Transportation Secretary, however, is also a major position. I would point out that Transportation Secretaries tend to have a very short lifespan. Norman Mineta , under president Bush, was the longest running Transportation Secretary at 5 years. Libby Dole and the two secretaries under Clinton held the position for four years. Most others held the position for two years or less.

So to make a long story short (too late) Blumenauer would make an excellent Secretary of Transportation, but it also, could, prematurely end his career as a Congressman. To put in perspective, Blumenauer has severed for 12 years, while John Dingell (D-Michigan), Dean of the House, is serving his 52nd year in the House.

Yes! Earl as Sec Trans in a Clinton or Obama administration. McCain might also pick a Northwesterner for that gig–Greg Biffle.

Russell –
point taken. Losing good clout is a big deal. I still remember what it was like when Hatfield retired from the Senate – we haven\’t completely recovered from that. And would Earl really want to be reminded that the last Oregonian who filled those shoes was Goldschmidt in the Carter administration? (He lasted just over a year)

Since Earl\’s a diehard Obama supporter, I don\’t think he\’d get the nod in a Clinton administration. Of course, that won\’t actually be an issue, because there will never be another Clinton administartion.

Biffle and McCain could wrangle a repeal of the federal 18 cent gas tax to ease costs for Rousch and team mates Kenseth and Edwards.

Hopefully Earl and his clout will make more people sit up and listen… and change.

We can\’t keep relying on oil and gas. Other alternatives need to be explored and encouraged.

The old adage has ever been \”change, or die\”. I\’d rather the US changed– to more bikes and alternatives to the internal combustion engine!