A ride that was organized to pay homage to a legendary bike race in Belgium, has now become a legend of its own. 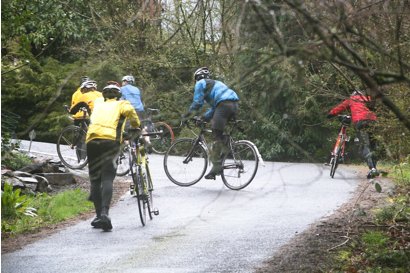 By any means necessary: Riders attempt one of the route’s grueling climbs.
(Photos by Dave Roth)

Saturday marked the second running of the underground ride/race known as De Ronde Van Oeste Portlandia, or Tour of West Portland. With 7380 feet of climbing in 45 miles, the route was created in honor of one of Europe’s toughest spring classics, the Tour of Flanders.

With the traditional lion of Belgium Flanders marking their way, about 300 participants showed up to meet the challenge of conquering eight of the steepest roads in Portland’s west hills.

One survivor, named Margi, left this comment after returning home from the ride:

“What an AWESOME ride! To me, this ride is what cycling in P-town is all about: a challenging ride full of camaraderie. Thanks to the organizers, and thanks to the guys who were riding near me who kept me smiling and laughing all day!”

But apparently not everyone laughed and smiled all the way to the end.

Whether they missed the directional markers, or were simply too battered to go on, several riders noted the pack had thinned out as the ride concluded with its final, difficult grind up to Council Crest.

One commenter left this explanation,

“Details can be easy to miss when one is deep in the pain cave. Along the ride I caught up to a number of people who were paying dearly for early ambitions…”

For more photos, check out the images taken by Dave Roth and Kevin Wagoner

Great report, however, the ride pays homage to a ride that\’s in Belgium, not Holland.

…easily 300 riders! It was really cool! And I finally made it up Brynwood!

Pneumonia kept me from enjoying this year\’s De Ronde. Next year… next year. For those that finished, well done. Friends with GPS units claimed 8700\’ in total climbing.

ahh missed it, well i puked out what had been with me for like 3 weeks on a little sunday ride alone.. LOL

flanders was insain this year.

Bring on the viddy!

I have huge respect for this guy…

That guy\’s a monster, he was even out of the saddle on some of those climbs. Mad respect.

What a beautiful ride, perfect Portland insanity, epic weather. Thanks everyone.

My group suffered two flats in the first 2 miles, so we fell back and ended up riding it out on our own, but we finished — just had to provide our own pats on the back at the by then deserted Crest 🙂

Thanks a ton to those who put this together!

I live in the Netherlands and love watching the real Ronde van Vlaanderen, really an epic one day competitions with radical climbs over 246km\’s… insane is the only word for it for a hobby rider like me!

I come from Portland originally and this copy ride caught my eye last year with the video on YouTube. I couldn\’t believe it!

I look forward to joining this crazy thing the next time I am home for a visit, I will rent a bike if I have to! 😉

Keep up the good training and I look forward to cycling with some of you some time on my next trip back stateside.

I ride daily in the west hills and noticed the little yellow lions a few weeks back…I followed the arrows a few times but had no idea what they were for.

Looks like a good time, wish I\’d have known about the event before today!

Thank you ride organizers. It was the perfect excuse to eat too much food afterwards.

I had a 9K ft ascent day riding in from Bvtn!

So I wanted to give a huge thanks to the guy that brought out the cookies and gatorade on the first climb up to fairview (I think on Sherwood?). You were a huge suprise and It was my favorite part of the ride. Thanks.

The ride was awesome. Glad I did it. I hung back with my buddies and completed it after everyone else left Council Crest. It was sweaty, cold, wet and painful but a highly memorable day.

anyone have the route mapped out on google maps or such?

Actually, this map is more up-to-date. It includes the new, extra climbs on Upland (near zoo) and Marth/SW14th/Westwood Court/Mitchell (above Hillsdale Library). Like you needed more…

Yes… huge thanks to the guys with cookies and gatorade. Would have run out of water and sugar w/o the assist! Thanks again and sorry to hear that your rear hub blew up on you! See you again next year.

Another thing Jonathan: that lion is a Flemish lion, not a Belgian lion. The difference might concern anyone interested in the Tour de Flanders, and Flanders itself.

Belgium is divided into two virtual countries. Flanders in the west and Wallone in the East. The Lion of Flanders appears on everything in the west part. The lion that is painted all over West Portland is actually a modernized version that got scanned off a rail pass.

Many thanks to those who \”organized\” this ride. A truly phenomenal experience. As one not familiar with the route, I\’m grateful for all the hours put into painting the directions on the pavement. In only one place did I nearly miss a turn due to a car parked over the sign. One place of improvement, if you would be so kind, is an additional sign about 100m ahead of the right turn near the bottom of Burnside as I saw many riders unable to make the corner after the fast downhill.