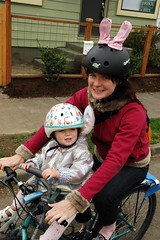 Juli and Danica Maus at the
Bunny on a Bike Ride last year.
(Photos © J. Maus)

Easter weekend means different things to different people. Some folks go to church and some folks ride their bikes through the city dressed up like bunnies (and I’m sure some folks do both).

But before the bunnies on bikes take over, let’s not forget about “Alice in Paris”.

Yes, it’s that time of the year again when the BTA throws a big party where the entire Portland Bike Mafia shows up, drink lots of wine and formulates sinister plots to take over the city. Should be fun.

Then, on Sunday it’s time to celebrate Easter by taking part in two great, time-honored Portland traditions: the Bunny on a Bike Ride and Zoobomb.

If you can believe it, there are three Zoobombs for you to choose from.

First, the Day-time Bunny Bomb meets at 1 pm at upper level Zoo Max Station and will meet up with the Southwest contingent of the Bunny Ride (and will then ride en masse to convene for a potluck picnic at a mystery park location). 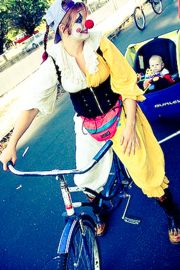 Caffeine Jones and her son
Bruce at a bike parade in August 2006.

Then, Ms. Caffeine Jones — formerly of the now defunct Alberta Street Clownhouse — is hosting a family-friendly Zoobomb. Caffeine says her Zoobomb is for parents who, “Want to take your kids Zoo-Bombing, but don’t like all the booze, and can’t stay out late on a school night.”

Join Ms. Jones at 4:30pm at the Veterans War Memorial up in Washington Park. She’ll have an egg hunt, storytime, and of course a mini-downhill run for the kids (and parents too!).

For those without little ones to put to sleep, don’t forget regular old Zoobomb. It meets at 9:00pm at the Pyle in front of Rocco’s Pizza (SW 10th and Oak).

And then of course there’s all the other cool stuff going on that I don’t know about.

What are your plans? Let us know and report back about your weekend adventures in the comments below…

Out of action after slamming my toes into the couch while playing football with Littleman. Aah, the joys of parenthood!
Wifey\’s BFF flying in for some extended R&R so plenty of opportunities to show of Portland from atop a bicycle (poor woman lives in L.A.).

Time to balance a bag of Trader Joe\’s organic frozen peas on my battered pinkies.

Rolled up my favorite climb, Saltzman in Forest Park on the cross bike with my wife as the sun beamed through the trees, the earth smelling of spring.

A hilly training ride then off to the Alice Awards. Great time spent with fellow minded individuals and advocates. Very inspiring.

Biked from my house out to the Springwater via Flavel, then too downtown, with my new light-up-my-life headlights. Beutiful night for a ride!

cleaned my beloved Sparky. his dérailleur has never shined so brightly (but oh dear heavens, the bike tire is so dilapidated i only now appreciate i\’ve been biking on sheer grace in defiance of physics)!
then the Alice Awards, which were just wonderful. thanks to all who helped plan it and got gussied to boot.
now to don bunny ears and join Carye Bye on a spectacular galavant with prologue from Col. Summers, compliments of Matt Picio.

Great day .. tho could have done without riding against the wind near the summit. Felt great after. Well .. hungry, but good.

Three of us rode from Hood River to The Dalles via the Mosier Twin Tunnels and Rowena Loops on Saturday. Beautiful cloud free skies and a great ride. (44 miles)

Photos and a ride report are posted on my blog.
http://tinyurl.com/2eaxz3

Rode from Sellwood to NE Airport Way on Saturday in an hour and 15 minutes. Could not believe it went that fast. I had thought it would take much longer. Beautiful day for a ride!

Sleeping late after riding my mom home on a tandem from Alice at 1 am last night! Pancakes and bacon for Easter breakfast.

Ian Stude of the PSU Bike Coop is getting married today – congrats Ian!

On Saturday I rode from Portland to Centralia with two friends on a randonneuring \”Dart.\” I had pre-ridden the first half of the route, but the second half was uncharted territory. I am glad the weather cooperated, because the route had significantly more hills than I had anticipated. I knew there was a steep climb on the first half (Green Mountain Road, about 3 miles of a sustained 10-14% grade with a few 18% pitches thrown in for good measure), but the section of the ride that I had not yet ridden, from Kelso to Centralia, was one hill after another . . ack!

Hey Cecil, that\’s what you get for going \”Rando\”. 😉 The STP route from Centralia to Kelso is remarkably FLAT!
Congratulations on completing the dart, it sounds like fun.

Rode to Freddies with my son on the Xtracycle to get Pokeman card protectors.. a perfect day

Thank you to everyone who came out to the BTA\’s 2008 Alice Awards and Auction in a demonstration of unity and commitment to making bicycling safer, easier, and more accessible for people of all ages and abilities.

I am so touched by your passion, enthusiasm, and dedication.

Congrats to everyone who won an Alice Award!

And my bottomless gratitude to the countless volunteers who made this event possible.

FRIDAY:
Safe Routes to School instructors training consisted of 30 adults pretending to be 4th and 5th graders riding in a line all around North Portland calling out and signaling their every stop and turn.

SATURDAY
More instructor training! We covered taking left turns, stopping quickly, and thanks to a surprise appearance by my bud Twitch, tall bike mounting and dismounting.

The Alice Awards! I\’d expected the predicted rain would hurt bike parking demand, but the weather was beautiful and what I\’d hoped was an optimistic number of racks turned out to be just right. Over 300 bikes! Woop woop! Congrats all you nominees and winners. It was fun to see you and all your friends living it up and looking fabulous.

SUNDAY
Congratulations Ian and Shawna! You know it\’ll be a fun wedding when the front lawn is full of hand-decorated easter eggs, the hall is well-stocked with donuts, and the back lawn is equally thick with bikes.

Caught the SE leg of the Bunny on a Bike Ride just in time, with my beloved stuffed bunny \”Bunny\” taped to my helmet. What a grand 5 quadrant bunny convergence we saw in Irving Park! What beautiful and hearty bunnies I saw…there was even a zoobombin\’ doggie dressed as a bunny! Carye Bye (and all her ride leaders) rock.

Sadly, too tired to Zoobomb.

Too much bike fun!

Did my first semi short ride, Wilsonville
rolled up Bell road to the top, and back
all in the pouring rain ;-)nice day!

Way up here in Seattle, we had our Easter/Spring Cargo Bike Ride & Picnic, in spite of (or in celebration of)pouring rain and high winds. Over 35 riders showed at the start, each one uttering their own variant of \”I thought everyone else would stay home – figured it would just be me and two or three others.\” Many fine cargo machines, including a rickshaw, a bakfiets, two Big Dummies, and various XtraCycles, all loaded with food, flowers, drinks, and firewood. Much hilarity and feasting ensued, including an appearance by Segue and her amazing Frankentrike, bringing homemade pea soup fresh from the stove and still hot. Freakin\’ fantastic.

I went to test-ride bikes on Saturday. My first ever \”real\” road bike! Bike Gallery folks are really nice, Matt at the Beaverton store was very helpful and knowledgable.

Couldn\’t find a frame size that worked, but he\’s having some correct-er ones brought in for me to try on Tuesday.

Great photos of this weekends events on your flickr account, Jonathan. Thanks for such thorough and artistic documentation!

The best part of this weekend was after the Bunnies on a Bike ride – after getting home, changing clothes, and heading out to get some groceries at New Seasons, I ran into 3 other people from the ride. I love living in SE!

BTA, you all did awesome – Alice was fabulous! Kudos especially to Trish, Kristie and Heather. What an awesome event!

Couldn\’t find a frame size that worked, but he\’s having some correct-er ones brought in for me to try on Tuesday