This story is part of my ongoing coverage of the 2008 National Bike Summit. See the rest of my coverage here. 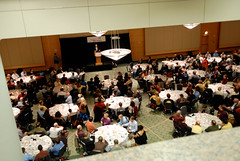 Blumenauer is slated to speak at the opening of tomorrow’s session with a talk billed, “Advancing America’s Journey to Embracing Cycling.” After that, the 500+ Summit attendees will break out into their choice of educational sessions.

There’s a wide variety to choose from including a session on cyclists’ legal rights featuring Portland lawyer and author Bob Mionske, and a session titled, Getting More People Riding: The Two-Mile Challenge, that features Dan Bower from the City of Portland Office of Transportation (PDOT) and Scott Bricker from the Bicycle Transportation Alliance (BTA). 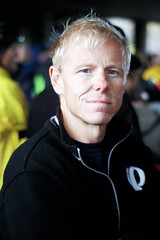 Lawyer and author Bob Mionske,
will speak twice on Wednesday.

Other sessions are on the topics of Safe Routes to Schools, creating bicycle-friendly national parks, how bicyclists can play a role in the 2008 elections, and more.

After the sessions, each state will connect with their delegation to discuss Thursday’s big day on Capitol Hill. I’m looking forward to seeing the entire Oregon Team all in one place (group photo coming!).

The day will end with the League of American Bicyclists annual meeting. The featured speaker this year is none other than Portland-based lawyer, author of Bicycling and the Law, and former Olympian Bob Mionske.

Stay tuned for more coverage (along with some local news stories I’m getting behind on as well).

Thanks for letting us know the agenda. Should be a great day!

I feel as if im there.