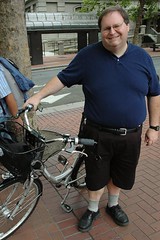 City Auditor Gary Blackmer has just issued the official notice (full text below) that Chris “Citizen” Smith has gathered the requisite signatures and donations in order to qualify for public funding of his campaign to grab a seat on Portland’s City Council.

Smith hopes to fill position #1 which is being vacated by Commissioner Sam Adams (he’s running for mayor). Smith has been an ardent supporter of bicycle-friendly policies and he has a deep expertise in the field of transportation.

In addition to publishing PortlandTransport.com, Smith hosts the archives of the KBOO Bike Show and sits on many advisory boards and committees that focus on bike and traffic safety issues.

This City Council race is likely to be the most competitive in the May election. Smith is going up against Amanda Fritz, Charles Lewis, John Branam and Jeff Bissonnette.

I hope to interview all the contenders eventually and I’ll be doing a full election update soon.

For more background on Chris Smith, read my interview with him from back in September and check out all my Election 2008 coverage.

Today, the Auditor certified Chris Smith as a Campaign Finance Fund candidate for the May 20, 2008 Primary Election. Mr. Smith, candidate for Commissioner No. 1, achieved 1,145 verified qualifying contributions from Portland registered voters during the qualifying period. In addition, Mr. Smith has filed for office by perfected nominating petition. The Auditor has determined that Mr. Smith has complied with all applicable provisions of City Code Chapter 2.10.

Does he have positions on things unrelated to transportation? What if Sho is elected and assigns him the Fire Bureau? Hopefully he spends some of that money and branches out a bit.

GLV: If Sho assigns him to the Fire Bureau, then that is a bad move on Sho\’s part…

That said, I\’ve heard him speak about other things, (housing in particular,) and he seemed knowledgeable about it as well. But you probably aren\’t going to read about that on bikeportland.org cause it doesn\’t have a lot to do with bicycling…

I was referring to his own website. Seriously, I like the guy, but he comes off as one-dimensional, which is not a good thing given our system of government.

Been on and off here lately so I\’m not sure — but has bikeportland.org endorsed this guy? Or are you not in the business of endorsements?

I like Chris, don\’t get me wrong! I just see a lot about him on this site.. not sure if he\’s simply the only candidate running or the only one with a very bike-centric mindset.

I\’m also an experienced corporate manager (Tektronix, Xerox) and a quick learner. So even if the Mayor gives me the Fire Bureau, I\’ll do a good job.

\”has bikeportland.org endorsed this guy? Or are you not in the business of endorsements?\”

I don\’t do endorsements. You see a lot about Chris Smith on this site because he is very involved with bike and transportation-related issues and I knew him and wrote about him long before he even declared his candidacy.

if the other candidates had bike-specific thoughts to share I would be covering them too. but on that note, my intention is to cover the campaigns closely and ask each one of the contenders to come on BikePortland.org and talk two-wheeled transportation. stay tuned…

Definitely, and I hope it didn\’t sound as if I was accusing you of anything. Hell, whoever can promise me they\’ll link up the corridor to the esplanade will get my vote 😛

GLV: Ahh. Yes, I agree. His website needs to be less one dimensional.

The web site is going through an overhaul right now 🙂

Just remember all those good bikie things we saw in the NL!

as Bud Clark would say, \”Whoopwhoop!\”

I\’ve been impressed by the quality of engagement Chris has had over the past decade or so with Portland neighborhoods. The transit stuff just seems like icing on the cake…

I just happened to meet Judy Shiprack yesterday and like her too. It looks like her and Milesnick are contending for Multnomah County District 3.

Milesnick looks interesting. I wonder if he does any biking around Portland.