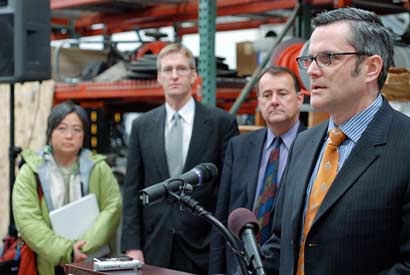 A few hours ago, PDOT hosted a press event for their Safe, Sound and Green Streets proposal. The event was held in a maintenance facility under the Hawthorne Bridge and took place on the eve of a hearing for the proposal at City Council.

City Commissioner Sam Adams has spearheaded this proposal since last June. Joining him today were a host of elected officials, the head of the Portland Business Alliance, representatives from biking and walking advocacy groups, and the aunt of 19 year-old Tracey Sparling, who was killed when a cement truck turned into her last October. 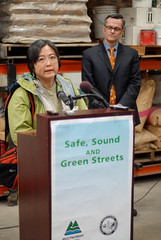 Susan Kubota at the podium.
(More photos from this event.)

Sparling’s aunt, Susan Kubota, first made headlines in November when her raw and gripping speech at the We are ALL Traffic rally gripped the crowd. Speaking today in front of a large contingent of local media outlets, Kubota said:

Along with Kubota, Adams wanted to show that this proposal is a “three-pronged effort” from the city, county, and state levels.

Oregon State Senator Rick Metsger, who chairs the state’s Transportation Committee, said that this funding proposal is necessary because “the federal government has abandoned us on our infrastructure.” He also added that:

“This is about community livability. It’s about spending a few more minutes with your family rather than a few more minutes sitting in traffic. It’s about have a little bit cleaner air because you’re not putting more CO2 in the atmosphere because you’re having idling engines. It’s about not dropping your child off to walk to school and worrying whether they’re going to be hit by an automobile because of an unsafe street and you have a safe route to school…that’s really what it’s all about.”

Also speaking at the event were Karl Rohde from the BTA, Sandra McDonough from the Portland Business Alliance, and Lynn Lingren-Schroeder from the Willamette Pedestrian Coalition.

Portland City Council will hold a hearing for the Safe, Sound and Green Streets Proposal tomorrow at 2:00 pm in Council Chambers (you are encouraged to attend and testify) and they will vote on the proposal next week (1/16).

You can view more photos from this event here.

Jonathan thanks for your excellent summary of this event.

Susan Kubota is an amazing person. As hard as it must be for her, she continues to help the public understand the importance of investments in traffic safety.

Thanks Susan – God bless you and your family.

Ms. Kubota- You are an inspiration. I am so terribly sorry for your family\’s tragic loss, but I am moved and uplifted by how you have come forward, helping our entire community by demanding safer streets. This must be so difficult to do as your family continues to grieve such a loss. Your strength and heart is matchless. My heart and thoughts are with you and your family each day that I ride (which is every day).