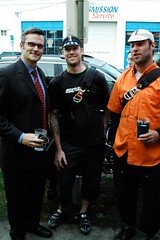 Sam Adams’ run for mayor got off to a rollicking start last night in Southeast Portland. People crowded into Roots Brewing like sardines for a glimpse at the man many expect to be the future leader of our city.

As expected there were many familiar bike community faces in the crowd. I noticed many PDOT and BTA staffers (including both the current and former Executive Directors), a few Zoobombers and even a Sprockette.

Local racers John Howe and Clint Culpepper from Team Beer presented Adams with an official team spoke card (right before posing for the photo at right). 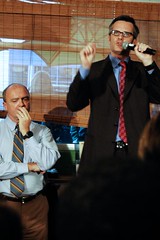 With many folks unable to make it inside, and flanked by his mom, grandma, and colleagues, Adams made his first public speech as a mayoral candidate.

Leonard, who claimed he was also speaking for Commissioner Erik Sten, said:

“Sam is a man of conviction…that’s what I really appreciate about him…Portland is at a crossroads, and he is the guy that’s going to lead this city to a place we’ll all be very proud of…Are all of you willing to step up!?”

Rojo de Steffey proclaimed that Adams has, “big shoes to fill, but he has big feet.” 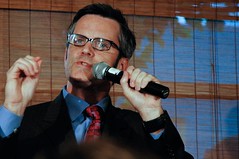 Then it was Adams’ turn. He said,

“Portland is a great city, but it will only remain great if we tackle the tough problems…that’s why I’m running for mayor.”

You can read more about Adams’ campaign on his new SamforPDX.com website.

For more photos of last night’s event, check out my photo gallery.